Quilting is a technique whereby layers of fabric are sewn together, usually in order to make a warm bedcovering. Quilting can be performed in many ways, but a quilt frame is often utilized to stabilize the layers while a quilter or group of quilters uses needle and thread to sew a running stitch through all the layers across the surface of the quilt. Hand-quilting was standard practice until the 1980s; by the twenty-first century, many quilters used sewing machines or long-arm quilting machines to sew the layers together. Sometimes the quilting stitches follow a decorative pattern; other times they are made in a basic grid format simply for their functional purpose of attachment.

Typically, a quilt consists of three layers. The top layer, often simply called the quilt top, is usually made up of fabrics sewn together to create a decorative design, either through the use of piecing (seaming fabric pieces together along their edges), or appliqué (attaching fabric pieces to a ground fabric). Whole cloth quilts are those whose tops are made up of a single piece of fabric (or pieces seamed together to imitate the appearance of a single piece) and which feature the quilting as their sole design element. The middle layer of a quilt is the batting, a sheet of loosely joined fibers, which provide loft and warmth. Traditionally, wool and cotton were used as batting; however, polyester also came to be used. The backing of a quilt, usually less decorative than the top, is usually made from plain muslin, a single printed fabric, or from old bed linens. Once all three layers have been attached with quilting stitches, the raw edges on all four sides are covered and joined with a long narrow piece of fabric called a binding.

Quilting has been practiced all over the world for millennia. Quilting frequently was used in the past to construct warm or protective clothing. Evidence of quilted garments reaches as far back as pharaonic Egypt, as seen in a thirty-fifth century B.C.E. ivory carving (in the collections of the British Museum) depicting a pharaoh wearing a mantle or cloak that appears to be quilted.

In medieval Europe, quilted garments were used first as stand-alone armor and later as supplements to metal armor. Worn under metal armor, quilted garments protected the wearer from bruising and scratching by the heavy outer armor and absorbed some of the shock of weapon blows. Surviving kaftans and other garments in the collections of the Topkapi Saray Museum in Istanbul show that around the same time (sixteenth to seventeenth centuries), quilted clothing was also popular in Turkey.

By the eighteenth century, quilted clothing had become the height of fashion in Europe and colonial America. Although waistcoats and jackets were also sometimes quilted, quilted petticoats were especially popular. Dress styles eventually evolved to have an open panel in the front, extending outward and downward from the waist to the hem, in order to show off elaborately quilted petticoats.

By the late eighteenth century, quilting in Europe, the British Isles, and America was mainly used in the construction of bedcoverings. Although quilted bedding had been made for centuries in Europe (the earliest surviving pieces are from Sicily, c. 1395), quilts became more common as fabrics imported by the East India companies and domestic textile production increased the availability of materials. Most of the late eighteenth-century quilts were whole cloth quilts, sometimes constructed from recycled petticoats (which had largely gone out of fashion by 1775). Whole cloth quilts were sometimes plain, with quilting as the main decoration, and sometimes embroidered. Piecing and appliqué were not as common, although extant pieces, such as a dated 1718 patchwork coverlet in the collection of the Quilter's Guild of the British Isles, prove that these techniques were not unknown.

Appliqué and piecing became the predominant techniques for creating quilt tops in the nineteenth century. Appliqué was more common during the first half of the century, but was largely superceded by piecing during the second half. Some quilts from the first half of the century, such as those in the so-called broderie perse, or cut-out chintz appliqué, style are thought to have been made to imitate palampores, printed Indian bedspreads. Baltimore album quilts, made in the Baltimore, Maryland, area between 1840 and 1850, are often considered the peak of the appliqué style, featuring highly detailed scenes and motifs.

The invention of the sewing machine during the 1840s, and its widespread use following the American Civil War, made piecing a faster, and therefore more popular, technique for creating a quilt top. Log cabin quilts are often the most recognizable nineteenth-century pieced style. Others include nine patch, triple Irish chain, and Bethlehem star. 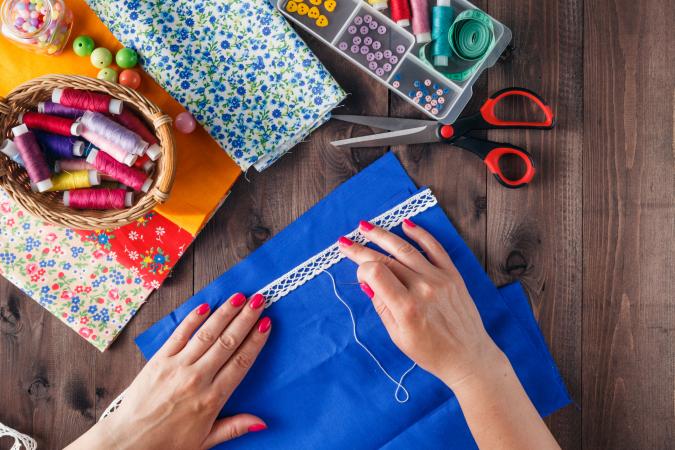 During the first part of the twentieth century, technological advances strongly influenced quiltmaking. Quilt kits made from die-cut fabrics in "Easter egg" colors produced with synthetic (rather than natural) dyes, are trademarks of 1920s to 1940s quilts. Amish quilts, first made during the last quarter of the nineteenth century, flourished in the first half of the twentieth century and became icons of American quiltmaking. Quilts made by Amish women often feature simple pieced designs and intricate quilting designs similar to those found on whole cloth quilts of the late nineteenth century, hearkening back to an earlier era of quilting.

After declining in popularity during the middle decades of the twentieth century, quilting has experienced a resurgence in the late twentieth and early twenty-first centuries. Sparked in the late 1960s and early 1970s by the women's movement and a few pivotal quilt exhibitions and conferences, quilting has enjoyed a revival that endured. In addition to the creation of quilts in the styles of earlier eras, studio artists are making quilts that push the boundaries of the traditional quilt aesthetic. Artists such as Michael James, Nancy Crow, and Faith Ringgold are creating pieces that prove that quilting continues to grow and thrive as a medium of expression.