Textile recycling is one of the oldest and most established recycling industries in the world, yet, few people understand the industry and its myriad players. Textiles have been recycled since the eighteenth century when the Napoleonic War caused virgin wool shortages and required that wool fibers be garneted into new yarns. Even though the textile industry has been utilizing used fibers for at least 150 years, the markets for recycled textile fiber continue to evolve.

The textile recycling process functions as a multi-faceted system that occurs along a pipeline of inter-related constituents that not only turns pre-and post-consumer waste back into fiber, but also is extracting new fiber from domestic waste. Specifically, PET (polyethylene terephthalate), the chemical substance from which some polyester is made, is reclaimed from plastic soda bottles. Although recycling is politically correct and ecologically friendly, 4-6 percent of landfills are comprised of recyclable textile products since discarded clothing and textile waste fail to reach the recycling pipeline, primarily because consumers do not understand the recycling process. The Council for Textile Recycling reports that the per capita consumption of fiber in the United States is 67.9 pounds with over 40 pounds (59 percent) per capita being discarded per year. Of countries where statistics are available, the United Kingdom deposits the highest percentages (90 percent) of textile waste to the landfill, compared to 65 percent from Germany, 30 percent from Denmark, and 20 percent from Switzerland.

and disposed of on a global scale, and (2) much of the used-clothing market is located in developing countries where annual wages are sometimes less than the cost of one outfit in the United States. For many people in developing countries, it is necessary to be able to receive used clothing surplus from industrialized nations. Simpson (1996) reports that nearly 34,000 tons of used clothing is sent to Africa annually. Because not all countries allow the importation of used clothing, black markets have risen as goods move across borders to meet market demands.

The three primary areas for processing of reclaimed apparel are Prato, Italy; Dewsbury, United Kingdom; and, more recently, India. These processing centers obtain used apparel from all over the world, sort items based on color and fiber content, mechanically reduce the apparel back to a fiber state, then reprocess into new yarns and end products.

The Process of Recycling Textiles

Textile and cutting wastes at the manufacturing level are considered pre-consumer waste and are easier to recycle because the fibers, dyes, and finishes are known and in like-new condition. Post-consumer waste is of uncertain origin and has a wide variance in quality and condition, making it more difficult to recycle. Ongoing research and development focuses on the problem of processing used, mixed fibers.

Glossary of Technical Terms Related to Recycled Fabrics and Fibers 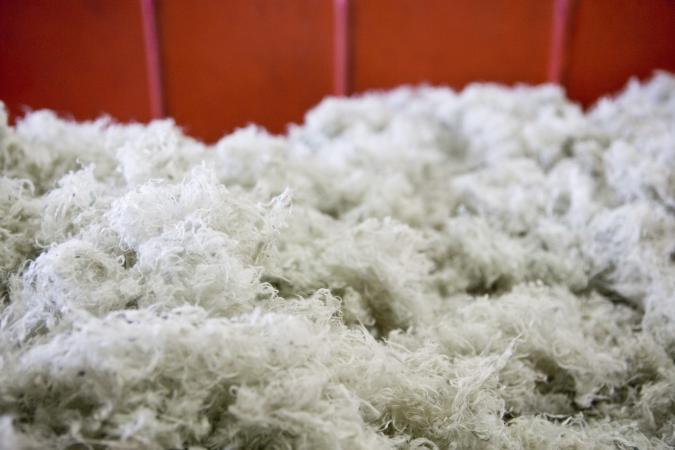 Most post-consumer textiles are collected by charity organizations, but it is impossible for charities to utilize all of the collected clothing so they sell the balance to rag graders. Approximately 500 textile recycling companies in the United States are responsible for diverting 775,000 tons of post-consumer textile waste from the landfills. These "rag sorters" sort used clothes for export, wipers, and fiber and fabric manufacturers (Council for Textile Recycling 1997). Although textile-recycling processors have historically purchased their inventory by weight from charity surplus, they have recently begun to expand their base of suppliers by helping municipalities develop curbside and drop-off textile collection programs. Almost half (45 percent) of the collected goods are recycled as secondhand clothing, typically sold to markets in developing countries. Thirty percent is used for the wiper industry and another 26 percent are converted to new raw materials used primarily as stuffing or insulation pads

Meis, M. "Consumption Patterns of the North: The Cause of Environmental Destruction and Poverty in the South: Women and Children First." Geneva, Switzerland: United Nations Commission on Environment and Development, 1991.