The origins of hand spinning, or twisting fiber to make yarn or thread, perhaps date back to the Paleolithic period. An ivory figurine found in France has been carbon-dated to 25,000 B.C.E. The figure is shown wearing a loincloth made of strands which were probably formed by hand-twisting since the earliest known hand spindles are from the later Neolithic period.

A hand spindle is any implement which can be rotated or twisted by hand to spin yarn or thread. In its most primitive form, a hand spindle can be a branch pulled from a tree or a rock picked up from the ground. In its most common form, it is somewhat like a top. It has a straight shaft with a weight attached to give added momentum. Along with primitive weapons, such as the axe and the knife, it is one of the oldest and most widely used tools of the human race.

The oldest hand-spun weaving fragment found was unearthed at the archaeological excavation of Catal Huyuk in south-central Turkey, and has been carbon-dated to more than 8,000 years old. It appears to be a bast fiber carefully prepared and spun into a very smooth yarn. It was woven at 30 threads per inch in one direction and 38 in the other direction.

Hand spindles developed into an astonishing array of styles designed for different types of fibers and yarns and various methods of spinning. Some are designed to revolve freely, suspended from the yarn. Others rotate with the weight of the spindle supported on a surface. Whorls can be positioned at the top, center, or bottom of the spindle shaft. A range of sizes developed, from little needle-like slivers of bamboo weighted with tiny beads of clay to yard-long wooden shafts with large plate-like wooden whorls.

The spindle style most widely used throughout history has been the small bead whorl type. It was the basic spinning tool in India, Africa, Southeast Asia, much of China, and throughout Meso-America.

By 2,500 B.C.E., the Egyptians were spinning linen so fine it could be woven at 540 threads per inch. The Peruvians were able to spin alpaca yarn at 191 miles per pound. The famous Dhaka muslins spun in India measured 253 miles per pound. Using the Tex System of measuring yarns gravimetrically, we can determine that they reached the highest level of skill that it is possible to achieve by hand or machine.

Simple spindles produced all the thread, yarn, and cordage for household use, for commerce, and for war. They met all these needs: clothing, household fabrics, blankets, tents, uniforms for armies, cloth wrapping, and cordage for packages, trappings for animals, rugs and tapestries, sails for ships, and vestments for church and the nobility.

Since spindles are small enough to be carried easily, they were used while walking, shopping in markets, watching flocks, visiting neighbors, and caring for children.

Spindles continued to be used long after spinning wheels appeared. They are still in use in many parts of the world. One can watch them being used in Southeast Asia, the Middle East, North Africa, and Latin America. 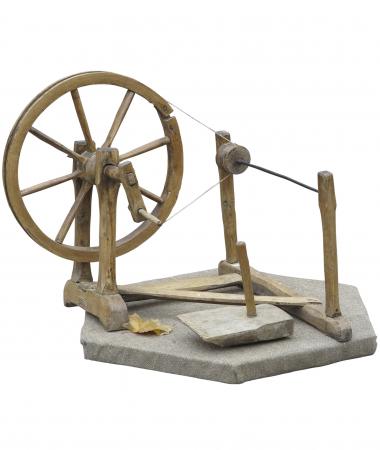 Spinning wheels evolved from the hand spindle. They first appeared in India about 750 C.E. From India they spread to Persia by 1257. They reached China by 1270. The first evidence of spinning wheels being used in Europe occurs in the guild laws of Speyer, Germany, in 1298.

The spinning wheels in Asia did not have legs. The base rested on the floor or ground and the spinners sat on the ground while spinning. In Europe, the base rested on legs. In the simplest design, a spindle with a grooved whorl was mounted horizontally between two vertical posts at one end of the base. A large wheel was placed at the other end of the base. A single cord encircled the groove in the whorl and the large wheel. Each time the large wheel revolved one time, the little whorl revolved many times.

The spinner turned the large wheel with one hand, and drafted the fiber as it was spun into yarn with the other hand. The yarn was then wound onto the shaft of the spindle.

As time passed, spinning wheels evolved into what is called the great wheel or walking wheel. The diameter of the wheel grew to three or four feet. Legs were added to the base. The spinner gave a quick turn to the wheel and walked back from the wheel as the yarn twisted, and walked forward to the spindle to wind on the yarn. This style of wheel was usually used for spinning short staple wool and cotton.

Lack of space in small cottages limited its use. Great wheels were about two feet wide and six feet long. They were widely used in northern Europe and were still in use on some American farms in the early twentieth century.

The earliest evidence of a spinning wheel with a flyer is a woodcut illustration in the "Waldburg Hausbuch" in Speyer, Germany, dated 1480. The flyer eliminated the need for the spinner to pause and wind each length of yarn as it was spun.

The flyer holds a bobbin on its shaft. A drive cord is doubled to encircle the large drive wheel and both the whorl on the metal shaft of the flyer and the bobbin, which turns freely on the shaft. Since the groove on the bobbin is deeper than the groove on the flyer, it rotates faster and continuously winds on the yarn as it is spun.

The Chinese were probably the first people to add foot treadles to spinning wheels. The addition of a treadle meant the spinner could sit comfortably and no longer had to turn the wheel by hand. The design of the spinning wheel as we think of it today was now complete.

Spinners using either hand spindles or spinning wheels usually used a distaff to hold a ready supply of fibers as they spun. Distaffs could be held in the hand or belt, mounted on a spinning wheel or freestanding. They were used throughout Britain, Scandinavia, Russia, Greece, the Middle East, and many parts of Latin America.

They varied from simple sticks to elaborately carved and painted artifacts. Small distaffs designed to be held in the hand or worn on the wrist were used to hold short fibers. Long or tall distaffs were used with long wools, flax, and hemp. 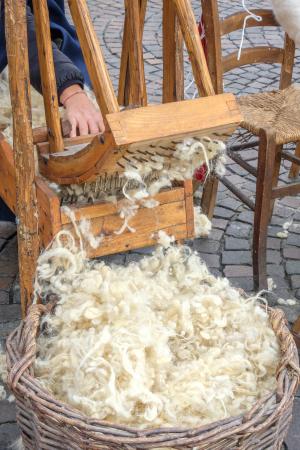 Better yarn or thread can be spun from most fibers if they are carded or combed before spinning. To card wool, early people used the dried heads of the teasel plant, which are covered with firm, fine, hooked bristles. This helped to remove debris and align the fibers.

Thorns set into a leatherback were found in a prehistoric lake village in Glastonbury, England. They were used to card animal fibers. Similar carders are still made with wire teeth. Carding removes debris, disentangles the fibers, and more or less aligns them. Combing aligns the fibers and removes the short fibers. Seeds had to be pulled from cotton bolls by hand. Then the cotton was beaten with wandlike sticks to loosen and fluff the fiber before spinning. The most important bast fibers, which are taken from the center stalk of the plant, are linen, jute, and hemp. After drying and retting, they underwent breaking and hackling. This freed the fibers from the stalk.

Before the industrial revolution, families worked together at home. They raised their own sheep, which provided wool for spinning. Sheep also provided milk, cheese, meat, leather, tallow for candles, and parchment for writing. These could be used by the family and village, or sold to traders. Farmers had economic independence and the freedom it provided.

Families could spin as they watched over the children and farm animals and while walking to town to shop or trade. At night, groups of neighbors gathered together to spin by firelight. They gossiped, told stories, and sang. By working together, families and communities could provide for all of their needs. Skills were passed down from generation to generation. The first sign of change was the "putting out" system. Merchants began to deliver fibers to farms and villages to be spun in homes. This eliminated the cost of maintaining factories, but could not supply sufficient yarn.

The population of England doubled in the seventeenth century. There were more people than the farm and village economy could employ. England's leading companies had created enough capital for the industrialization necessary to spin and weave great quantities of fabric cheaply.

The industrial revolution really began with a revolution in the way cloth was spun and woven. All of the conditions necessary to change the family and village-based culture and economy into the factory system occurred in the eighteenth century. 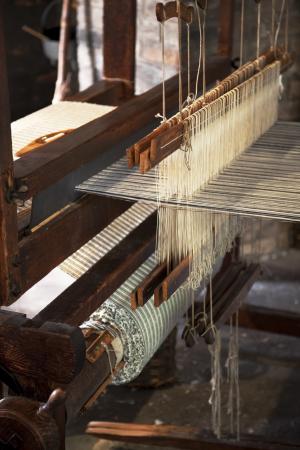 In 1733, John Kay invented the fly shuttle loom, which increased weaving speed and thus the need for more yarn. By 1767, James Hargreaves devised the spinning jenny, which could only spin weft yarn. To supply the need for higher-twist warp yarn, Richard Arkwright invented the water frame, and by 1782 his mill employed 5,000 workers. The cotton mule, invented by Samuel Crompton in 1779, required only one worker to watch over 1,000 spindles. By the 1780s, Edmund Cartwright devised a way to connect the machines to power supplies.

People from villages, which had bred farmers, craftsmen, and merchants for centuries, now flocked to the cities to find work. Home production could no longer compete in speed and price. Some villages were decimated, with only the old, the infirm, and babies left to fend for themselves. Conditions in most of the early textile mills were deplorable. Children as young as five or six worked long hours. Workers were fined for arriving late, being ill, or breaking any rules. When people could not find work, they turned to drink or begging.

Hand Spinning and the American Revolution

During this period, economics was guided by mercantilist philosophy. Mother countries expected their colonies to supply them with raw materials at low prices. They would then manufacture great quantities of goods and sell them to the colonies at high prices. British restrictions on American production and trade were major causes of the American war for independence.

American colonists were forbidden to export textiles. It was illegal to transport yarns or yardage from one colony to another. The British decreed the death penalty for anyone attempting to take plans or information or textile machinery to the colonies.

The use of cotton in the United States surged forward with Eli Whitney's invention in 1793 of the cotton gin, which made cotton the most widely used fiber in America. By 1816, power looms began to be installed in the United States. At that time, 95 percent of American cloth was still being made with hand-spun yarn.

It would be wrong to assume that technological improvements were destined to replace traditional methods all over the world. Hand spinning is still done with all styles of spindles and spinning wheels in many part of Southeast and Central Asia, the Near East, Africa, and Latin America.

In industrially developed countries, hand spinning has become an enjoyable pastime. Excellent spindles, spinning wheels, and looms, and a wide selection of fibers, are available. Many industrialized countries have guilds of spinners and weavers, which meet to share skills and information.

Many art museums have collections of old textiles in which one can see quality that equals or surpasses anything produced by twenty-first century industry. There are excellent art history books in which one can study clothing in paintings of the sixteenth through the eighteenth centuries. Magnificent gilded cut velvets, satins, brocades, and laces are depicted in pictures that were painted on hand-spun, hand-woven canvas.

Hochberg, Bette. Handspindles. Santa Cruz, Calif.: B and B Hochberg, 1977.