Striped cloth is found among the some of the earliest extant examples of woven textiles and must have arisen as a natural consequence of the color variability of yarns, particularly woolen yarns. Randomly distributed warp yarns of different colors or shades would have spontaneously produced a sort of asymmetrical striped cloth; it would then have been a very small step for the weaver to stretch her warp in such a way as to space out at even intervals the varying colors of yarn, producing true striped cloth. The use of yarns dyed in different colors must have been the next, equally obvious, step in the process of producing striped cloth. By early historic times, striped cloth was a normal part of the weaver's repertoire in cultures around the world, although it does not appear that the wearing of striped cloth predominated in any of the societies of antiquity.

As the French social historian Michel Pastoureau has pointed out, in the European Middle Ages striped cloth took on strong connotations of deviance and abasement. Servants and court jesters wore striped cloth; so did prostitutes, madmen, and criminals, not voluntarily but by official orders. The bold, broad, contrasting stripes of their garments seemed to stand for neither-this-nor-that, ambivalence, ambiguity, and a realm of unclear and violated boundaries. This connotation of striped cloth is with us still; a jumpsuit or a tunic-and-trousers combination garment made of broadly striped cloth, in either horizontal or vertical stripes, instantly carries the association of prisoners, convicted criminals, or, in a tragic variation, inmates of concentration camps. A loose, lightweight pajama-like union suit of brightly striped cloth, with a broad collar and cuffs, is the iconic outfit of the clown, a figure whose humor derives from his license to transgress the boundaries of orderly society.

The wearing of stripes was not always a sign of social deviance, but even as a fashion statement, stripes had connotations of boldness and daring, a willingness to test the boundaries of social tolerance. The broadly striped hose worn by young men in the Italian Renaissance, familiar from countless paintings and tapestries, gave them a swaggering air that must have seemed impudent and shocking to their more soberly dressed elders.

Striped cloth also had a role to play in heraldry, as overjackets, streamers, and banners of colored stripes could be used to display the colors of knights in combat or in the simulated combat of the tournament. The heraldic use of striped cloth survives in the practice of suspending medals signifying civil and military honors from striped grosgrain ribbon, with the color, width, and placement of stripes specified exactly by the rules of the decoration. In some cases the honor also includes the right to wear a wide sash of striped ribbon in the same colors as the ribbon of the medal itself. Ribbon in the tricolor pattern of red, white, and blue, often folded into a rosette worn as a hat decoration, became a potent symbol of the French Revolution. 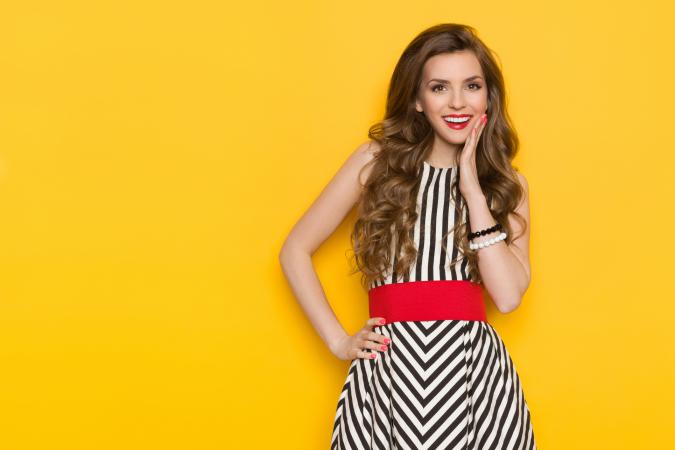 Although striped cloth never entirely lost its connotations of danger and deviance, it acquired other associations, so that by the eighteenth century striped cloth entered the repertoire of ordinary European fashionable clothing. In particular, striped clothing acquired sporting or leisure connotations; Victorian paintings of seaside scenes frequently show women strolling in long summer dresses of black-and-white or blue-and-white striped fabric. As this association with the seaside suggests, stripes also called to mind nautical images. Woolen sweaters knitted with horizontal stripes of blue and white became standard gear for sailors, from Venetian gondoliers to crew members of private yachts.

The almost infinite number of possible combinations of colors and widths in which striped cloth could be produced led to a continued symbolic use of striped garments in a way that distantly recalled the old rules of heraldry. Boating clubs and cricket teams at English universities frequently sported boldly striped blazers in club colors. Neckties in stripes of prescribed colors and widths (with the cloth cut on the bias to produce diagonal stripes) similarly were used to identify members of military regiments, alumni of university colleges, clubs, and similar affinity groups.

The associations of striped cloth with leisure and sporting pursuits also made sturdy striped canvas popular for the upholstery of outdoor furniture, the canopies of beach umbrellas and cabanas, and the like. In the early twentieth century, before the invention of air-conditioning, buildings in Western cities were festooned in summertime with brightly striped awnings to keep sunshine and rain from entering open windows.

Striped Cloth in the Twenty-First Century

Since World War II, striped cloth has occasionally been fashionable for women's attire, and almost any year's ready-to-wear collections will include some striped dresses, skirts, and shirts. Horizontally striped sweaters remain sportswear standards for both men and women. But the major uses of striped cloth today are so under-stated as to escape immediate notice; striped cloth is primarily used now for men's suiting materials and for men's dress (business) shirts and ties. Partly in the hope that vertical stripes produce an illusion of a slimmer and taller body, many men wear dark suits with very thin stripes (pinstripes) or slightly fuzzy stripes (chalk stripes) of white or some other light color. Shirting materials, too, are frequently woven in white or light colors with dark pinstripes, or in stripes of even width (often of blue and white). In some years bright, multicolored stripes come into fashion; these are often made up into shirts with white collars and cuffs. And plain shirts are often worn with "regimental" striped ties (which, in America at least, seldom have or retain their specific symbolic associations). Sober business attire is the last bastion of a type of cloth that once had a far wider and more exciting range of meanings.