This cloth has powerful connections with often-romanticized notions of Scottish identity and history. Tartan has also been widely used as a fashion textile owing to the appealing and distinctive nature of its various patterns, which are known as setts.

The precise origins of tartan are not known; however, a fragment found in Falkirk, which dates from the third century C.E., suggests that simple woolen checked cloths existed in Scotland at an early period. Complex patterning of the type now associated with tartan did not exist in Scotland until the sixteenth century. Hugh Cheape discusses the origins of the name tartan as follows:

The word "tartan," probably French (from the word tiretaine), was in use early in the sixteenth century.… It seems likely that in some way that we can't now trace, this word came to describe the fabric we now call tartan. (p. 3)

Contrary to contemporary popular belief, tartan patterns have no traceable historical links with specific Scottish families or clans. These associations developed from the early nineteenth century, when they were actively promoted by historians and writers, as well as woolen manufacturers and tailors. Tartan, however, was by 1600 established as part of the culture of the Highlands of Scotland. It was widely worn by all levels of that society and it formed a distinctive element of Highland dress, which was largely based around the plaid or breacan. Men wore the plaid belted, and women adopted it as a large shawl. Up until the late eighteenth century, the setts worn were largely determined by the locality and the tastes of the weaver and purchaser.

In 1746 the following law was passed:

"No man or boy within … Scotland, shall, on any pretext whatever, wear or put on the clothes commonly called Highland clothes (that is to say) the Plaid, Philabeg, or little Kilt, Trowse, Shoulder-belts, or any part whatever of what peculiarly belongs to the Highland Garb; and that no tartan or party-colored plaid or stuff shall be used for Great Coats or upper coats, and if any such person shall presume after the said first day of August, to wear or put on the aforesaid garments or any part of them, every such person so offending … shall be liable to be transported to any of His Majesty's plantations beyond the seas, there to remain for the space of seven years. (Disarming Act of 1746) " 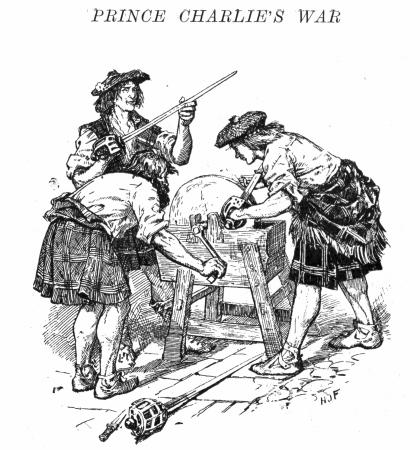 Scene from Jacobite rising of 1745

The battle of Culloden in 1745 was the last stand in the campaign by supporters of the Catholic Prince Charles Edward Stuart, to form a challenge to the ruling Hanovarian King, George II. Owing to his family's Scottish origins and the support he had from the largely Catholic Highlanders, the "Young Pretender" promoted Highland dress as the uniform of his Jacobite army. This led to tartan being associated with political rebellion and sedition and to its proscription under the Disarming Act of 1746. Under this act, the wearing of tartan was forbidden, with the penalty of possible transportation for seven years. In addition to the brutal repression that followed Culloden, these measures, which lasted until 1782, began to put an end to the distinctive Highland way of life.

The fact that tartan survived this period of dramatic social and political change was also linked to the actions of the British government. After Culloden, a systematic effort was made to divert Highlanders away from Jacobite adventure and toward the cause of British imperial war. The Highland regiments formed at this period were exempt from the ban on Highland dress, and the British establishment decided to make use of tartan in their uniforms to encourage martial kinship amongst their recruits. The Highland regiments' involvement in British imperialist expansion, and the fact that their role was somewhat over-represented in imagery, helped to spread the popularity of tartan internationally. New military setts were designed by tartan manufacturers beginning in 1739 with the original "government tartan," a design of green, blue, and black, usually known as the Black Watch.

From the early nineteenth century tartan began to be internationally recognized as representative of Scottish, rather than merely Highland Scottish, identity. Its popularity was linked to romanticized notions of Scottish history put forward by writers such as the poet James MacPherson in his dubious translations of the work of the Gaelic bard Ossian. The more credible literary works of Sir Walter Scott also increasingly captured the public imagination. Scott played a significant role in orchestrating the well-publicized visit of King George IV to Edinburgh in 1822, during which the monarch appeared in a version of full Highland dress. This royal endorsement of tartan was continued from the 1840s by Queen Victoria, and was a great stimulus to its fashionability in Britain, France, and elsewhere.

From the mid-eighteenth century, tartan design and manufacture began to be carried out within large-scale commercial enterprises, rather than primarily being the concern of local weavers. The firm Wilson's of Bannockburn was the most prominent tartan manufacturer from the mid-eighteenth to the mid-nineteenth centuries and Cheape claims that they "were mainly responsible for creating tartan as we know it today" (Cheape, p. 52). Their archive indicates that they catered to a fashionable market eager to consume new patterns named either after ancient clans or popular Scottish figures such as Sir Walter Scott. In addition to their prodigious innovation in tartan design, they also contributed to the modernization of tartan manufacture by "regularizing the sett, colors, and thread count" involved with each design (Rawson, Burnett, and Quye, p. 20).

Throughout the twentieth century tartan retained its role as both an internationally recognized symbol of "Scottishness" and as an attractive fashion textile. Tartan is currently widely worn by Scots as Highland dress on formal occasions and also to sporting events. Since the 1970s tartan has featured in the subcultural dress of skin-heads, rockabillies, and punks, as well as being prominent in the work of international designers such as Vivienne Westwood, Jean Paul Gaultier, and Alexander McQueen.