Throughout history the essential form of the boot has been adapted to fit the needs of the wearer and the culture. Materials vary as does form-but the essential purpose of the boot remains the same throughout most cultures; to provide protection from the elements. Boots are usually made of leather, but have been made of many other materials, including silk, cotton, wool, felt, and furs. A perfect example of this is the kamiks of the Inuits. The Inuits pride themselves on their efficient use of their resources and their traditional boots, called kamiks, are no exception. Crafted of caribou hide or sealskin (their two main food sources), these boots are warm and waterproof thanks to an ingenious raised band of stitching with sinews that ensures a waterproof join at the sole and upper.

The oldest known depiction of boots is in a cave painting from Spain, which has been dated between 12,000 and 15,000 B.C.E. This painting seems to depict man in boots of skin and a woman in boots of fur. Persian funerary jars have been found which date from around 3000 B.C.E. and are made in the shape of boots. Boots were also found in the tomb of Khnumhotep (2140-1785 B.C.E.) in Egypt. The Scythians of about 1000 B.C.E. were reported by the Greeks to have worn simple boots of untanned leather with the fur turned in against the leg. These simple baglike boots were then lashed to the leg by a thong of leather. This basic form can be found in the traditional dress of many Asiatic and Arctic cultures as well.

In the ancient world, boots represented ruling power and military might. Emperors and kings wore ornate and colorful examples; this was a significant distinction when the majority of the population went barefoot. Leather was expensive, and roman emperors were cited as wearing colorful jeweled and embroidered examples-even with gold soles. Boots were also already associated with the military-the campagnus was worn by the highest-ranking officers and some senators in ancient Rome, the height of the boot denoting rank. Other styles, such as the high, white leather phaecasim, were worn as ceremonial garb.

During the Middle Ages, the styles shoes and boots established by the ancient world continued. Courtiers of the Carolingian period were depicted wearing high boots laced halfway up the leg. Under Charlemagne the term brodequin is first used for these laced boots and roman terms rejected. The huese, a high, soft leather shoe and forerunner to the boot appeared toward the ninth century. During the twelfth through fourteenth centuries, a short, soft boot called the estivaux was popular. Toward the middle of the fourteenth century, people often wore soled hose, which precluded the need for shoes and boots.

In the fifteenth century, men wore long boots that reached the thighs and were usually of brown leather. This style was prevalent among all of the classes. Despite this widespread popularity, this was emphatically not an appropriate style for women; in fact this was one of the chief criminal charges against Joan of Arc in 1431. It was more common for women of the fourteenth century to wear laced ankle boots, which were often lined in fur. 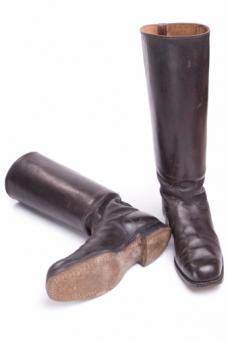 By the sixteenth century, high boots of soft perfumed leather were worn to meet upper stocks and would soon develop into the wide, floppy cavalier styles of the first half of the seventeenth century. Soft boots folded down- and slouchy boots worn with boot hose elaborately trimmed with lace flaring out into wide funnel shapes to fold down over the boots-characterized these fashions. Boot hose was worn both for its decorative qualities and to protect the costly silk stockings. These high boots featured a leather strap on the instep (the surpied), and a strap under the foot, which anchored the spur in place (the soulette). They had funnel tops, which covered the knee for riding and could be turned down for town wear. Under Louis XIII a shorter, lighter model of boot emerged, the ladrine (Boucher, p. 266). In the early years of the eighteenth century, under the influence of the French court, boots disappeared except for those worn by laborers, soldiers, and devotees of active sports, such as hunting and riding.

The seventeenth century had seen the emergence of the first military uniforms, and the boot had played an essential role in this standardization. The high-legged cavalier boot of the previous century was transformed by a highly polished and rigid leg-the prototypical military jackboot. The high top and rigid finish was supremely practical and successful at protecting legs while on horseback. This style was seen as early as 1688 and continued to be worn into the 1760s. Other popular styles were essentially military in origin. One notable example was the Hessian or Souvaroff, which was brought to England by German soldiers circa 1776. This style featured a trademark center front dip and was trimmed with tassels and braid.

For the more gentlemanly pursuit of sport riding, the high cavalier boot of the seventeenth century developed into a softer and closer fitting "jockey" style boot with the top folded down under the knee for mobility which showed the brown leather or cotton lining. This style originated in 1727 and became increasingly fashionable into the 1770s. The popularity of the English style riding boot was a part of the greater Anglomania of the eighteenth century and foreshadows the "Great Masculine Renunciation" that would follow in the wake of the French Revolution and the early years of the nineteenth century.

The vogue for democratic, English style dress had made the boot more popular than ever. Beau Brummel epitomized the radical simplicity of the dandy. His typical morning dress was reported as "Hessians and pantaloons or top boots and buckskins" (Swann, p. 35). Despite this endorsement, the shape and design of the boot inevitably shifted with fashion. The Wellington supplanted the Hessian since the tassels and braid of the Hessian were difficult to wear with the newly fashionable trousers. The Wellington boot was essentially a Hessian that had had its curved top cut straight across with a simple binding. This style was reputedly developed by the Duke of Wellington in 1817 and dominated menswear in the first quarter of the nineteenth century. The success of the Wellington was so pronounced that it was said in 1830, "the Hessian is a boot only worn with tight pantaloons. The top boot is almost entirely a sporting fashion…although they are worn by gentlemen in hunting, they are in general use among the lower orders, such as jockeys, grooms, and butlers. The Wellington…the only boot in general wear" (The Whole Art of Dress as quoted in Swann, p. 43).

The Blucher was another important style of the early nineteenth century named for a popular war hero. The Blucher was a practical, front-laced ankle boot worn by laborers in the eighteenth century, which had popularly been known as the "high-low." After 1817 this style was known as the Blucher and was worn for casual and sport wear. This basic laced-front style would prove to be popular in modified forms to this day, and has served as the basis of the modern high-top sneaker, hiking boot, and combat boot.

The popularity of boots began to influence women's fashions during the early years of the nineteenth century. Women had been wearing masculine-style boots for riding and driving during the eighteenth century, and by the 1790s their styles had become distinctly feminine with tight lacing, high heels, and pointed toes. By 1815 fashion periodicals begin to suggest boots for walking and daywear; boots were widespread by 1830. The most common style was the Adelaide, a flat, heelless ankle boot with side lacing. This style would remain in use for more than fifty years.

During the Victorian period boots of all kinds reached the peak of their popularity. The trend was for greater comfort and practicality in footwear for both men and women and was aided by technological advances like the sewing machine and vulcanized rubber. In 1837 the British inventor J. Sparkes Hall presented Queen Victoria with the first pair of boots with an elasticized side boot gusset. This easy to wear slip on style would be popular throughout the rest of the century with both men and women. By mid-century the two most popular styles were the elastic side-also known as the congress, side-spring, Chelsea, or garibaldi-and the front-lacing boot. The two most popular styles for front lace were the Derby and the Balmoral. The latter boot was designed for Prince Albert and was similar in style to the modern wrestling or boxing shoe. By the late Victorian period, balmorals or "bals" were most popular and frequently featured contrasting cloth tops and pearl button closures.

Although the Wellington had been almost entirely abandoned in England in favor of the short ankle boot by the 1860s, the style survived in United States and contributed to the development of the cowboy boot. The cowboy boot is believed to have originated in Kansas, and is considered to be a combination of the Wellington and the high heeled boots of the Mexican vaqueros. In the United States the Hessian continued to be worn as well and can be seen in photographs of the outlaw "Billy the Kid" from the 1870s.

For women in the mid-century, the majority of footwear was in boot form. The elastic side was a popular choice for daywear, but by the 1860s was replaced by front lace balmorals in satin or colored leather for dressy occasions. Tightly laced boots gave the impression of modesty but also accentuated the curves of the ankle and calf. Increasingly boot styles emphasized this aspect. By 1870 the principal styles worn were side springs, balmorals, and high-button boots. A new development was the barrette boot, which can be viewed as an extension of the shoe since so much of the stocking could be seen through the delicate straps. 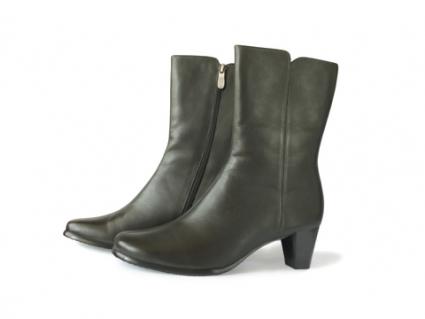 In the early years of the twentieth century, boots were still prevalent but soon abandoned by fashionable dress in the 1920s. In this period boots returned to their functional role, and traditional forms remained in use for specific military and sport activities. The exception to this was the vogue among women for knee-high leather Russian boots which featured relatively high heels and a side zipper for a close fit. In the second half of the twentieth century, boots reemerged as an important element in the counterculture fashions favored by the young. Early rebels adopted the sturdy Engineer or Motorcycle boot as a visible sign of their rebellion inspired by films such as The Wild One and Rebel Without a Cause. In the late 1950s a trend developed for elastic side boots copied from the nineteenth-century originals, but with the addition of a high heel and a pointed toe which were worn with the new slim-fitting tapered trouser. These were the Chelsea boots and would later become known as "Beatle boots."

Women saw an explosion of fashion boots after 1960. While the flat-heeled, white kid leather boots launched by Parisian couturier André Courrèges was the ubiquitous boot of the decade, many styles of boot were popular. Go-Go boots could be ankle, knee, or thigh high and with or without heels, they all served as the perfect accompaniment to the miniskirt. By the end of the decade, retro styles became popular, and the front lacing granny boot became an essential part of the hippie style.

Styles were increasingly unisex in the 1970s, with both genders wearing suede chukka boots, cowboy boots, and high zip-up platform boots. The Dr. Martens boot, originally designed as an orthopedic shoe in the 1940s, was adopted by the punk counter-culture in the 1970s, but by the 1990s had been assimilated into popular fashion. Masculine-styled boots worn by women have been considered extremely provocative, especially when paired with more conventional symbols of femininity.

While traditional forms of boots continue to be worn throughout the world for specific functions, they have also played an important role in fashion throughout history.