A cane is a rod fabricated from wood, metal, plastic, or glass, used by individuals as walking aids, ceremonial or professional batons, or fashionable accessories. Some historians and collectors distinguish canes from walking sticks by materials, with the former constructed from bamboo and reed plants, and the latter from wood, ivory, or bone. Others distinguish on the basis of geographic linguistics-a cane in America is a walking stick in Europe.

Most walking sticks and canes consist of a handle, shaft, and ferrules, one between the handle and the shaft to support the cane and conceal the juncture where the two meet, and one, at the bottom of the stick, to prevent wear of the shaft and to prevent splitting.

Wood is the most popular material for the shaft, and almost any kind of wood can be used-for example, chestnut, ebony, or beech. Naturally, the more expensive the wood, the more valuable the cane, and choice of material has historically helped to convey the status of the owner. For example, malacca wood, found only in the Malacca district of Malaysia, must be specially cultivated, and Irish blackthorn is a slow-growing wood that must be cut in parts and set aside for years to harden before it can be fashioned into a walking stick. Both types of canes are considered to be highly desirable for collectors. Other materials include ivory, bone, horn, and even glass. Metal and synthetic materials are also frequently used as orthopedic aids.

A cane's handle is traditionally decorative. Tops can be constructed from silver, gold, ivory, horn, or wood. They may also be fitted with precious gems.

The Many Uses of Canes

Early canes probably originated as weapons of defense or as implements used for journeys over rough terrain. Pilgrims in the Middle Ages used them, as did bishops who traveled with sticks called crosiers. Less self-evident is the history and use of the walking stick for its alternative purposes of ceremony, fashion, or a badge of professional rank or membership.

Modern items such as ski poles, pogo sticks, and white sticks for the blind are based on prototypes of canes.

Although in the early 2000s the cane is considered primarily an orthopedic aid, the ceremonial staff was present as early as Egyptian times.

In a historical context, ceremonial walking sticks and staffs have traditionally conveyed a sense of law and order to others. For example, in the fifteenth century, canes were important royal accessories. Henry VIII used a cane to symbolize British royal power. The cane has also functioned as a ceremonial token of military might. A short stick or baton was a favorite accessory for military officers in Europe between the eighteenth and early twentieth centuries. Canes were not only used in formal military dress but were also sometimes given to commemorate honorable service. It was thought that these canes bestowed confidence upon their owners, and British swagger sticks take their name from this thought. Ceremonial canes may also function as a badge of office or member-ship, and universities, political parties, and trade guilds adopted their usage for these purposes. The walking stick figures heavily into the official insignia of the medical profession. In the caduceus motif, a snake entwines around a walking stick, and this was modeled on the staff of Aesculapius. In Greek myth, Aesculapius's staff had the power to heal and thus symbolizes the godlike power attributed to the medical profession in modern times. 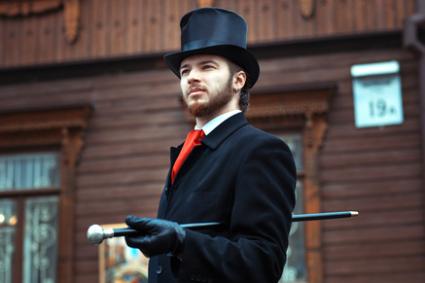 In addition to symbolic ceremonial usage, canes and walking sticks were also indispensable fashion accessories for men and women between the seventeenth and nineteenth centuries, used to display a sense of gentility and social propriety. During this period, canes could be distinguished by day and evening use, and it was assumed that an individual of good social standing would have a cane for every occasion, much in the way that women had an array of daily toilettes. Day canes were wide-ranging in their styles, and rare and expensive materials, ornamentation, and intricate decoration helped to express wealth and taste to others. While men's sticks were stately, women's sticks were often delicately accentuated with ribbons or gilding. Evening sticks were more homogeneous in style. Traditional evening canes were usually made from ebony and were narrower and sometimes shorter than day sticks. Silver knobs or gold bands decorated ferrules and handles. These types of canes are those of popular imagination, featuring heavily into early twentieth-century Hollywood films.

The gadget stick of the nineteenth and twentieth centuries emerged out of the fashionability of walking sticks. These were canes with an additional purpose; they contained secret items, such as snuffboxes, cosmetic compacts, picnic silverware, and later, radios; or the handle could convert into a seat, or the shaft was actually carved out as a flute. As their name conveys, people tried to top each other's canes of ingenuity and these walking sticks were a great fad.

Sword sticks, a popular item for military officials and dignitaries in the eighteenth century, operated in a similar way to the later gadget canes, although sword sticks were closer to the cane's original historic usage as a defense weapon, rather than for an adherence to fashion. These canes hid swords within their shafts and replaced the prevailing fashion for men to carry both swords and canes on their person. This trend lasted into the 1800s and spawned the development of other weapon sticks and gadget sticks for hunting and sport.

During their heyday, fashion canes, whether decorative or purposeful, were governed by specific rules and etiquette. One was not supposed to carry a walking stick under the arm, nor lean on it. Canes were also not to be used on Sundays or holidays, nor brought on a visit to a dignitary or member of the royal family, given the cane's connotation of authority and rank and its capacity to conceal a weapon. 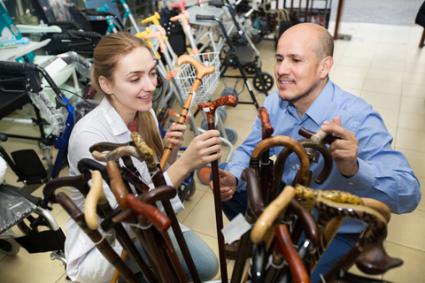 Canes and walking sticks have traditionally been sold through specialist retailers, such as mountaineering outlets and medical suppliers. Fashion canes were historically found at jewelers or shops that also sold umbrellas and sun parasols and still can be found there in the twenty-first century, although there are far fewer retailers than there were in earlier centuries. Many canes are also purchased through antique dealers, auction houses, or directly from the artisans.

The Decline of the Walking Stick

Until the 1800s, specialist carvers, metal workers, and artisans produced canes and walking sticks by hand. However, the popularity of fashion and gadget canes fueled a market for their mass manufacture and subsequently helped lead to their demise. By the late nineteenth century, materials could be sourced globally and produced in volume for public demand. Canes became less artistic and reflective of current fashions, and the modern crook-handled wood cane became the standard walking stick. By the turn of the century, walking sticks had become either novelty items or orthopedic aids. A London newspaper reported in 1875 how the usefulness of canes for many individuals had declined: "he needs not a help-he has no one to hit, and there is no one who will hit him; he needs not a support-for if he is fatigued, is there not the ponderous bus, the dashing Hansom, or the stealthy subterranean?" (Thornberry 1875).

Indeed, the visibility of canes and walking sticks as fashionable or ceremonial items declined more rapidly during the interwar period. The emergence of the automobile and public transportation and the fashionable popularity of briefcases and attachés rendered the cane less useful as a physical aid or storage device. It lost its traditional association with gentility, power, and authority, instead becoming a symbol primarily associated with the elderly or infirm.

Stein, Kurt. Canes and Walking Sticks. York, Pa.: Liberty Cap Books, 1974. A good overview of the accessory and its many uses.

Thornberry, Walter. "My Walking Stick Shop." In The Pictorial World. 3rd edition. July, 1875. In Gilham, F. Excerpts on fashion and fashion accessories 1705-1915, Volume VI: Umbrella and Walking Sticks 1766-1915, 1705-1915. This volume contains an extensive range of primary news cuttings and advertisements for walking sticks. Available from the art library at the Victoria and Albert Museum in London.