Until recent times, footwear made for children generally mimicked the idiosyncratic styles of the adults of their time and place (taking into account the special characteristics of the feet of infants and young children). It was not until the twentieth century that footwear highly divergent from the dominant adult prototype evolved specifically for children. However, in premodern times there were some circumstances concerning children's footwear that are of historical interest.

In ancient Greece, sandals and slipper-like shoes predominated for both children and adults. Boys were "sandaled" around the age of seven when they first left their homes for school, a rite of passage similar to a boy's receiving his first pair of breeches in later eras. Young girls making their first departure from home, which took place with the girl's marriage shortly after reaching biological adulthood, also went to the shoemaker's for their first pair of sandals. A survey of Tanagra terra-cotta figures from the first half of the third century B.C.E. suggests that young children, perhaps specifically girls, wore slippers before their official departure from family life. There is much debate surrounding the question when and if children in ancient times were shod.

Swaddling, the practice of tightly wrapping the limbs of newborn infants, was widespread in Europe prior to the middle of the eighteenth century. However, when Jean-Jacques Rousseau published émile, his polemic on "natural" methods of child rearing in 1762, swaddling was already on the wane. There was disagreement about whether children should wear shoes. Thomas Delaney, a shoe advocate with a vested interest in shoe-wearing, suggested in his 1597-1600 book The Gentle Craft that shoes for the newborn should be part of the midwife's kit. On the other hand, Dr. William Cadogan in Essay on Nursing (1748) rails against the practice of swaddling but also contends that "Shoes and stockings are very needless Incumbrances" for the young (Cunnington, pp. 24, 33).

Archaeological artifacts from in and around medieval London (1100-1450) show how children's footwear reflected the dominant adult forms, but with slight differences. It appears that children's shoe styling lagged about fifty years behind the fashions of adults. The closures for children's shoes were designed more for practicality than for fashion, being usually on the center front vamp rather than style-consciously on the side. Fashion extremes, such as the Poulaine shoe with a long pointed toe, were more modest for children (Grew and De Neergaard). A case study showing that more than one style of footwear for children existed simultaneously can be found in seventeenth-century Boston, Massachusetts, specifically around the year 1670. Five portraits of young Bostonians circa 1670 are extant: the portrait of the Mason children at the De Young Museum in San Francisco and Alice Mason at the National Park Service Adams Historic Site in Quincy, Massachusetts, and three portraits of the Gibbs children, Henry and Margaret Gibbs in private collections and Robert Gibbs at the Museum of Fine Arts, Boston. All of the portraits may have been painted by the same artist. Of the discernible footwear styles, the rounded toe and the square folded toe with setback sole can be differentiated. Archaeological evidence from the Nanny Privy Site in Boston from roughly the same date also reveals the possibility of multiple styles, a rounded toe, a square toe setback sole, and a possible variation of the square setback toe with equidistant triangular openings on either side of the toe (Butterworth, pp. 66, 67).

In Emile, Jean-Jacques Rousseau encouraged baring the child's feet. "Let Émile run about barefoot all the year round, upstairs, downstairs, and in the garden. Far from scolding him, I shall follow his example; only I shall be careful to remove any broken glass." But raising a child "ála Jean-Jacques" sometimes had unwelcome results: "[T]heir hair straggles in a hideous and disgusting way …They are longer checked, but clamber on to you with their muddy feet." 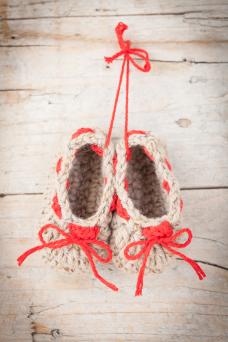 In the nineteenth century as the making of shoes became more systematic, particularly in New England, evidence emerges of the development of particular styles of shoes for children. The Reverend Richard Manning Chipman noted, for example, that "cack" was a specific term developed in Massachusetts around the year 1820 for a baby's soft leather-soled heelless shoe. On the other hand, the Oxford English Dictionary discloses that the word "bootee" or "bootie" did not occur in popular English usage as a description of infant's shoes until its appearance in a Sears, Roebuck and Co. catalog in 1929.

Throughout the nineteenth century, periodicals encouraged women to try their hands at creating shoes for their young children. Patterns appeared in Godey's Ladies' Book (1830-1898), and Peterson's Magazine (begun 1842). In the anonymously written The Workwoman's Guide (1838), the author gives patterns and sewing directions for baby's first and second pair of shoes, as well as a pair made of ticking material (A Lady, pp. 173, 174). One hundred and fifty years after Monsieur Rousseau encouraged the possibility of childlike-children, footwear began to be developed specifically for them, albeit in the form of variations on already existing adult shoes. In 1890, George Warren Brown opened the Brown Shoe Company in St. Louis, Missouri, but it was not until the 1904 World's Fair that his variation on the Oxford tie for boys came into its own. In that year a young executive from Brown's company met artist Richard F. Outcault and the "Buster Brown" shoe was born. Of equal importance is Buster's sister "Mary Jane" who gave her name to the ubiquitous girl's low-strapped shoes. 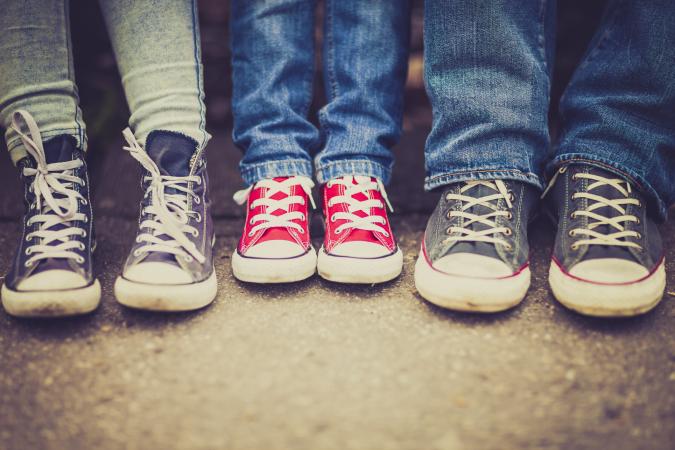 Children's increasing participation in sports was an important twentieth-century development for their shoes. Keds, originally produced by the U. S. Rubber Company and acquired by Stride Rite in 1979. They "were the first shoe mass marketed as a canvas-top sneaker" a word coined by Henry Nelson McKinney because "all other shoes, with the exception of moccasins, made noise when you walked." In the early 1920s, the Converse Shoe Company hired Chuck Taylor away from a basketball team to conduct basketball clinics and in 1923 the All Star Chuck Taylor Converse rubber shoe was introduced. The Bata Shoe Company marketed a similar shoe internationally.

"Jellies," the translucent plastic (polyvinyl chloride) shoes, were developed due to leather shortages resulting from World War II. They were created by Mr. Jean Dauphant and family at Plastic-Auvergne and are a continuing international success.

The twentieth century increasingly saw shoe manufacturers appealing directly to children through such techniques as tie-ins with television shows such as Howdy Doody, The Lone Ranger, various cartoons, and Sesame Street. The 1980s saw catalog and department store giant Sears, Roebuck and Co. introduce Grranimals, a line of children's clothing with accompanying footwear that had strategically placed emblems that aided children in creating coordinated outfits on their own.

On the basis of an examination of recent children's footwear styles, it could be argued that after thousands of years of the subjugation of children to the vagaries of adult shoe styling, it is now children's shoes that are influencing adult shoes, particularly in the area of slip-ons and Velcro-closures. The history of children's shoes is a relatively underdeveloped field that offers many possibilities for fruitful further study.