The term "eyeglasses" is used to indicate lenses that are held up to or worn before the eyes, either as an aid to vision or as a fashion accessory. This term formerly encompassed a wide variety of single and double lenses and kinds of frames; in modern American usage, it is taken to mean spectacles (the term more commonly used in the United Kingdom). Originally a practical vision aid, eyeglasses have at various times in their history served as such fashionable symbols of status, learning, and other desirable qualities that they have even been worn by those with perfect vision. Although their form has been influenced by fashion throughout their history, not until the twentieth century did they truly evolve from a practical necessity into a fashion accessory in their own right, becoming a vehicle for design, individual expression, and enhancement of personal appearance.

The earliest double eyeglasses, which appeared in Italy by the late thirteenth century, took the form of two magnifying lenses with the handles riveted together, and needed to be held in front of the eyes or balanced on the nose. The round lenses were ground from beryl, quartz (known as pebble), or glass, with frames of iron, brass, horn, bone, leather, gold, or silver. As eyeglasses were primarily used by monks, scholars, and those both learned enough to be able to read and wealthy enough to own them, they became associated with persons of importance. The demand for eyeglasses increased dramatically with the invention of printing in the fifteenth century, and mass-production methods evolved to produce inexpensive eyeglasses for the new reading public.

Once spectacles were available to everyone by the early seventeenth century, the wealthy and fashionable sought means of distinguishing themselves from the lower classes. Spectacles, therefore, dropped out of fashion, at least for public wear, and would remain so for the next three centuries. Since fashionable people did still need to see clearly, beautifully made hand-held lenses came into favor, in part because they provided an opportunity for elegant gesture and display. Variations included the so-called perspective glass, a small single lens with a handle, worn attached to a cord or ribbon around the neck; elaborate scissors glasses, a pair of lenses held up to the eyes with a long, Y-shaped handle; and small spyglasses (telescopes), which were incorporated into fans and walking sticks, or worn around the neck like charms.

The Eighteenth and Nineteenth Centuries 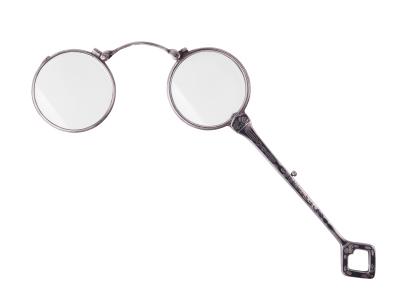 In the early eighteenth century, spectacle-makers introduced steel spring bridges and frames, and the first spectacles with temples (rigid side pieces). Improvements in the design of eyeglasses continued in the nineteenth century; rimless glasses became commonly available around the middle of the century, and the invention of fine steel wire riding bow and cable temples, with the end curved around the ear, greatly improved the fit and practicality of spectacles in the 1880s. Frames of tortoiseshell, steel, silver, and gold were the most commonly worn, joined later in the century by celluloid, hard rubber, gold-filled, and aluminum frames.

Although spectacles had become quite practical by the nineteenth century, it was still not considered attractive, especially for ladies, to wear them in public. The lorgnette, a pair of folding glasses held up to the eyes by a handle at the side, was introduced around 1780 and remained popular for women through the early twentieth century. A new eyeglass style for men, the monocle, a single lens held in the eye socket and attached to a ribbon or cord, experienced brief periods of popularity in the 1820s, 1880s, and 1910s. The most commonly worn form of eyeglasses from the mid-century on, however, for both sexes, was the pince-nez. These consisted of two small lenses (oval, rectangular, octagonal, or semicircular), attached by a bridge, with a variety of spring and nosepiece arrangements to keep them in place. Lacking temples, they were known at the time simply as eyeglasses (as distinct from spectacles). They were usually worn attached to a cord, chain, or ribbon, which was attached to the vest or dress, looped around the neck, or, for ladies, attached to a hairpin. An 1883 article in the New York Times declared that eyeglasses had "virtually driven spectacles off the field," and noted that they were considered so stylish that some young ladies and gentlemen were adopting them simply "because they think it gives them a distingué appearance" (p. 14).

In the early twentieth century, though pince-nez continued to be worn, spectacles finally began to gain acceptance. Large, round spectacles, with heavy frames of real or imitation horn or tortoiseshell (referred to as horn-rims) were at first affected by university students, and by the 1910s had become fashionable for both men and women. They were considered to give an air of wisdom, seriousness, and sincerity to the wearer, an association exploited by the silent film comedian Harold Lloyd, whose earnest and sympathetic screen persona owed a great deal to his trademark horn-rim glasses.

By the mid-1920s, horn-rims began to decline in popularity, as women's bobbed hair and close-fitting hats made heavy frames uncomfortable and too conspicuous, and as Harold Lloyd's popularity made men see them as a symbol of comedy. Smaller rimless spectacles and frames of white gold became the style, and through the 1930s more attention was paid to making eyeglasses more becoming, largely by making them as inconspicuous as possible. Glasses were still considered a necessary evil, as famously summed up by Dorothy Parker in her 1927 poem "News Item": "Men seldom make passes/At girls who wear glasses." In an attempt to change this state of affairs, Altina Sanders designed the harlequin frame, with solid dark rims and upswept sides based on the shape of a carnival mask, which was introduced in New York in 1939. These were considered the first glasses designed solely with the idea of improving a woman's appearance, and eyeglasses began to be taken seriously as a fashion accessory.

By the early 1940s, eyeglasses were available in a wide variety of colored plastic frames to harmonize with the wearer's complexion or costumes, and women were advised to have a spectacle wardrobe, with jeweled frames for evening and special frames for beach and sportswear. After World War II, variations on the harlequin shape (later known as cat-eye or cat's-eye) were the dominant style for women, and they were available in many new textures and finishes-opalescent pastels, laminates of glitter, or patterned fabric-and embellished with carving, gilding, metal studs, and rhinestones. More conservative styles were also available, with solid eyebrow bars and clear plastic or light metal lower rims. With glasses so prominent, chic eyeglass wearers were advised to keep other accessories simple and subdued, advice that fit in well with the short coiffures, off-the-face hats, and button earrings of the 1950s. For men, the heavier metal-and-plastic brow-bar frame and thick black horn-rims such as those worn by the singer Buddy Holly were the most popular styles, and remained so well into the 1960s.

In July 1965, just as the use of contact lenses was on the rise, Vogue magazine devoted its "Beauty" section to eyeglass fashions, and noted that women with no eye problems were now "writing their own prescriptions: '20/20, but plenty of frame'" (p. 108). Simple, solid-colored frames, whether small and rectangular or large and round or hexagonal, were offered by a newly formed industry group, the Fashion Eyewear Group of America. By 1965, the first retro fad in eyewear had emerged from the boutique scene in London and New York, and early-twentieth-century-style granny glasses, as worn by such celebrities as John Lennon and the Byrds's Roger McGuinn, continued in vogue for the rest of the decade.

The fashion designers Elsa Schiaparelli and Claire McCardell, among others, had designed some eyewear lines as early as the 1950s, but the first high-profile line of designer eyeglasses was launched in 1969 by Christian Dior. The trend toward designer frames continued in the 1970s, with designers such as Yves Saint Laurent, Diane von Furstenberg, and Halston joining the field. The decade's signature look was oversized frames with rounded corners, in semitransparent pastels or faux tortoiseshell, with tinted or gradient lenses in colors to coordinate with the wearer's eye makeup. Bolder styles, often with shiny gold accents and curved or wavy temples, were balanced by the high-volume, blow-dried hair-styles of the time, and were well-suited to the glitz of disco fashions.

In the 1980s, many more designer frames were available, often with visible designer logos, in new eyewear boutiques carrying thousands of styles for men, women, and children. The same style trends continued, but there were also harder-edged styles, in brighter, solid colors, in response to the new boxy silhouette and large, bold costume jewelry. Some retro styles from the 1940s and 1950s were produced to complement the trendy preppy and nerd looks. Toward the end of decade, designers such as Ralph Lauren, Giorgio Armani, and Calvin Klein started a move toward smaller frames, with cleaner, refined styling. These were updated versions of the serious horn-rims of the 1910s and 1920s, and celebrities such as Richard Gere soon adopted the new look, inspiring even contact-lens wearers and those with 20/20 vision to invest in new frames.

In the late 1980s, eyeglasses for sports, or performance eyewear, began to be reconsidered as an industrial design problem, and new materials such as titanium were employed to create stronger, lighter frames. In the 1990s, the high-tech, minimalist aesthetic carried over into fashion eyeglasses, and the quest for refinement continues to be an important theme in eyeglass design. At the same time, in synch with the decade's retro fashions, designers began to look more carefully at the past, and frame styles from every decade of the twentieth century are available in the twenty-first, either updated or faithfully reproduced, from a multitude of designer collections. Even deliberately unbecoming glasses have been embraced as nerd chic, a symbol of hipness and sophistication, and baby boomers have transformed humble drugstore reading glasses into a fun fashion accessory.