High-heeled shoes, perhaps more than any other item of clothing, are seen as the ultimate fashion symbol of being a woman. Little girls, who raid their mother's closets for dressing-up props, gravitate toward them. A first pair of high heels was often a rite of passage into womanhood.

To be so fashionably shod is often detrimental to one's feet, but a high-heeled shoe is widely perceived as the sexiest, most feminine shoe a woman can wear. High heels have the ability to change radically the wearer's posture and appearance. Heels make the leg look longer, slimming calves and ankles. A woman's silhouette changes. Her breasts are thrust forward and her bottom pushed out to create a seductive S-shape that helps to create that sexy walk. These physical changes influence how a woman feels and often how she is perceived, so creating the paradox of wearing heels. On the one hand, high heels are all powerful. A woman becomes taller, striking a defiant pose that signifies sexuality and power. In heels she can take on the world. Yet, high heels can also create a helpless woman, teetering and unsteady, unable to run for the bus, passive and weak.

Heels were first introduced in the 1590s. In the 1660s Louis XIV of France made high heels fashionable for men. As a relatively short man he coupled high heels with tall wigs to create an illusion of height. Royal customization gave rise to red heels, a symbol of status and power, initially only worn by those in the royal court. High red heels continued to be fashionable into the 1770s.

The French fashion of the 1770s and 1780s saw high heels placed under the heel arch of the foot, causing the wearer's toes to be crushed in the upturned pointed toe, yet tilting the wearer forward in a provocative manner. The resulting pain was worth it for the very fashionable look. A satirical poem of the time says it all: "Mount on French heels/When you go to a ball /'Tis the fashion to totter/ and show you can fall!" Toward the end of the eighteenth century, heels became lower or wedged, disappearing altogether by around 1810.

From the 1850s women's heels began to make a comeback, and by the 1860s fashionable heels could measure 2.5 inches. In June 1868 the Ladies Treasury told its readers: "High-heel boots are universal, notwithstanding that medical men have been writing very severely against them. They say the fashion causes corns, cramps, lameness at an early age, lessens the size of the calf and thus makes it lose its symmetry" (Swann, p. 48). From 1867 there was also the introduction of a straight, slender high heel known as the Pined PINET, after the French shoemaker Francois Pinet.

In the 1890s some courtesans wore a style known as the Cromwell shoe, based on the Victorians' rather fanciful ideas of the shoes worn by Oliver Cromwell and his followers; this style had a heel of up to 6.5 inches.

Early heels were carved from wood and covered with leather or fabric used for the upper shoe. To strengthen the area between the sole and the heel the leather sole often ran down the heel breast.

The Cuban heel with straight sides appeared in 1904. It was usually constructed using pieces of leather stacked to create its height. The bar shoe was the classic style of the 1920s, sporting a high Louis or Cuban heel. Jewelled heels decorated with paste, diamante, and enamels were featured on evening shoes. 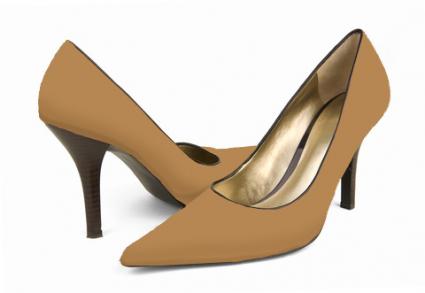 A significant development in the history of high heels came on the wave of Christian Dior's New Look in 1947. This style required a correspondingly slim and elegant high heel. Previously high slim heels were prone to breaking. The problem was solved when a steel rod was inserted through a molded plastic heel. Stilettos were first mentioned in the Daily Telegraph on 23 September 1953. Initially high fashion, made popular by the French shoe designer Roger Vivier, all women were soon wearing them until the early 1960s. Stilettos caused many practical problems, including the pitting of wooden floors and getting caught in street gratings.

It was also in the 1960s that for the first time since the 1720s, the high heel was reclaimed by men in the form of the Cuban heel on what were known as Beatle boots, a style made popular by the the Beatles. In the 1980s high stiletto heels made a comeback, as power dressing for women at work became de rigueur. Coupled with a shoulder-padded masculine tailored suit and red lipstick, the high heel symbolized sexual power and dominance, a "don't mess with me" visual attitude.

Since then the high heel has never really disappeared. Its resurgence in the early 2000s was reflected in the popularity of Manolo Blahnik's shoes in the TV show Sex and the City. Some women only wear high heels for special occasions as formal wear, while others wear them all the time. Whatever the preference is, the high heel will never go away.