In the medieval period new shoes were available only to a tiny elite of aristocrats and wealthy merchants. However, it appears that in Britain almost all of the poor wore some kind of footwear, which was made possible through the widespread practice of remaking and repairing old shoes. Medieval shoes were made from leather, silk, and other cloths and up to the end of the sixteenth century, all men's footwear tended to be flat. The most extreme style of the fourteenth and fifteenth centuries was the "poulaine," or "pike," which featured extremely pointed toes, sometimes up to four inches (10 centimeters) in length.

Shoes with an arched sole and heel emerged at the end of the sixteenth century, a novelty that was to become a predominant feature of men's shoes in the seventeenth and eighteenth centuries. During the reign of James I (1603-1625), masculine court fashions became particularly flamboyant and stockings and shoes became a key focus of attention. The shoes of the wealthy began to be decorated with large bows, rosettes, or "roses." These styles were superseded in the reign of Charles I (1625-1649), when political instability and war in Britain and Europe encouraged the popularity of military-inspired, knee-high, leather boots. These were fashionable from the 1620s to the 1690s and despite their practical origins as riding wear, they were often elegant and decorative.

The rise of France as an international fashion center under Louis XIV (1643-1715) promoted the popularity of French court styles. Shoes were adorned with decorative buckles, a style that remained highly fashionable until the 1780s. Buckles were bought as separate items and by the late eighteenth century they were available for all tastes and pockets, from sparkling precious stones for the wealthy, to plain steel, brass, and pinchbeck for the lower orders.

New shoes became more accessible to the middle classes in the eighteenth century, owing to relative increases in incomes and new manufacturing methods. The development of large workshops, which produced ready-made shoes by hand helped to make shoes more affordable.

The Enlightenment and the French Revolution (1789- 1799) stimulated tastes for the plain, English, country mode of dress, which dominated international fashion from the 1780s. An important element of this style was the jockey or top boot, which featured a top of lighter colored leather. Popular men's wear styles of the early nineteenth century included laced-up walking shoes, flat leather evening pumps, and boots of various styles including top boots, Wellington, Hessian, and Blucher boots. The latter three illustrate the tendency for boot styles of the era to be named after significant military figures or developments.

By the mid-nineteenth century, ankle boots, such as the Balmoral, became the most common type of footwear for men and popular shoe styles included the Oxford and the Derby. These shoe types along with the brogue were widely worn in the twentieth century and are still common in the twenty-first century.

Shoe production was increasingly mechanized in the mid-nineteenth century and by 1900 most people wore shoes made in factories and sold by shoe retailers, rather than patronizing shoemakers. By the 1890s, relative increases in wealth, increased participation in sport and leisure activities such as tennis, golf, and cycling, and improvements in mass-manufacturing techniques led to middle-class consumption of an increasingly diverse range of styles, suitable for various contexts and activities. Despite these transformations in the production and consumption of shoes, leading bespoke shoemakers from this era such as John Lobb Ltd., London, and New & Lingwood, London, have survived into the twenty-first century. 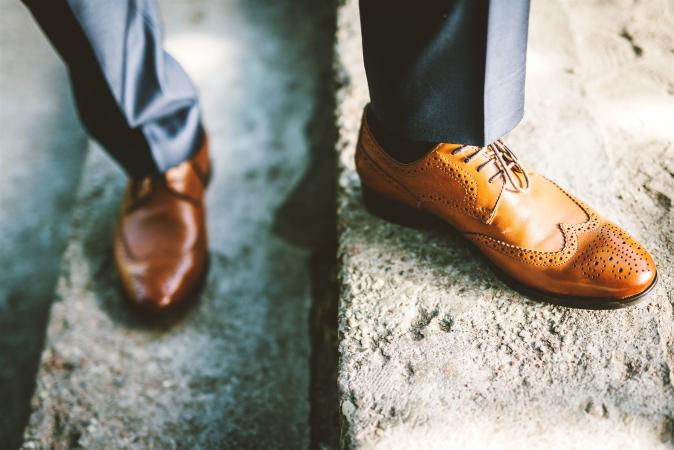 The predominant features of men's shoes in the post-1945 period have been an expanding diversity of styles and price levels and a more rapid turnover of fashionable designs. The manufacture of ready-made shoes became global after 1945, with low-cost production now concentrated in Asian countries and more exclusive shoes being made in Italy. From the 1950s the rise of youth fashion generated a greater degree of experimentation in men's footwear, with the emergence of designs such as brothel creepers, winklepickers, Chelsea boots, and Doctor Martens boots.

Since the mid-1970s, the trainer or sneaker has come to be ubiquitous footwear for men of all ages and tastes. This has partly been owing to a general move toward informality in male appearances, but is also linked to the influence of black street fashion and the aggressive marketing efforts of global sportswear companies like Nike, Puma, and Adidas.

"A sewing machine for leather was in use by the 1850s … and by the end of the century most shoes were made in large factories. The personal relationship between shoemaker and wearer disappeared except at the most expensive end of the market" (Mitchell, p. 34).

The 1970s saw the appropriation of men's shoe styles such as Dr. Martens by women, a trend that was linked to the influence of feminist ideas and the punk subculture. Unisex or androgynous footwear has continued as a feature of mainstream dress in the early twenty-first century. However, despite these developments, there remain significant differences between men's and women's shoes. High heels are still seen as exclusively feminine and men's businesswear remains focused around variations on the Derby and Oxford styles.

Cohn, Nik. Today There Are No Gentlemen. London: Weidenfeld and Nicolson, 1971.