The term "hosiery" in contemporary usage is generally defined as stockings or socks, more specifically as tight-fitting knit goods that cover men's feet and varying portions of the lower leg, or as knitted feet and leg coverings for women (such as panty-hose or tights). The related term "hose," while used synonymously, is even more specifically historically defined as a man's garment that fully covers the legs, like tights, and is tied to the doublet (a short, close-fitting jacket). The origin of the word "hose" is the Old English "hosa" or leg covering, or Middle English "hose" for stocking. A related German term, "hosen," is also often seen in historical use. In the history of Western dress, the term "hose" has been used to refer to a wide range of men's leg coverings, with or without a footed portion, from early centuries C.E. through the early nineteenth century. These include the Roman lower leg wrappings called feminalia, the early northern European footed or ankle-length woven trousers, and medieval criss-crossed leg wrappings sometimes referred to as chausses.

Men's hosiery is a garment in which technology and fashion are interlinked in terms of both meeting demand for and inspiring changes in styles. From the Middle Ages through the early Renaissance, there are numerous images in art that portray the bagginess, sagging, and wrinkling of ill-fitting hose worn under tunics or houppelandes. As clothing construction technology such as tailoring improved to allow a closer fit over the body, men's legs and leg coverings became more prominent, and hose were the predominant lower body garment for men throughout the fifteenth and sixteenth centuries. For instance, fourteenth- and fifteenth-century Italian tailoring techniques created full-length parti-colored hose for men from woven fabrics cut in panels on the bias. They were sewn with curved seams to tightly fit the leg and lower torso. These techniques also allowed hose to get longer, and by the last quarter of the fourteenth century the two separate legs of hose reached the waist and were joined into one garment, similar to what we today call tights. They were seamed up the back and closed over the crotch with an overlapping panel or a codpiece. Various trends in color and patterning were seen in men's hose throughout each period of their predominance. Many fashionable hose in the seventeenth century were embroidered with gold and silver thread for a type of embellishment around the ankles called clocks or clocking. Early hose were sometimes constructed with leather soles on the foot that could be worn instead of shoes, and the fourteenth-century fashion for soled hose with long pointed toes is the best example of this.

Knitted socks were recovered from Egyptian burial excavations dating to the fourth or fifth century C.E., the same period that knitting was introduced to Europe. Hand knitting of socks was an important industry in medieval Europe and by the sixteenth century had advanced to a fine craft. Silk hose for those who could afford them were hand knitted in the round on needles as fine as wire with very fine silk threads. Well-fitted hose were an important fashion item for men of the gentry and nobility during the sixteenth and seventeenth centuries. Hose worn by lower status men were coarser, knitted by hand in the round from wool or linen fibers, or still made from bias-cut woven fabrics. The production of hose to meet the demands of men's fashion sparked important innovations in knitting. The first knitting machine (called a flatbed frame) was invented in late-sixteenth-century England to make hose. It produced coarse, flat pieces of knitted cloth with eight stitches per inch. Although it could be knit ten times faster than by hand, the cloth was considered suitable only for peasant hose. By century's end this technology was refined to make silk stockings using approximately twenty stitches per inch, creating a very active industry and market for higher quality, high-priced hose that lasted until the end of the eighteenth century. Innovations to the knitting machine in the eighteenth century included refinements in shaping hosiery on the frame during the knitting process. Cotton, from India, was introduced for knitted hosiery in England in 1730. By the beginning of the nineteenth century, fashion changes in men's dress resulted in legs covered by long pantaloons or trousers instead of hose, and knitted hosiery industries declined. 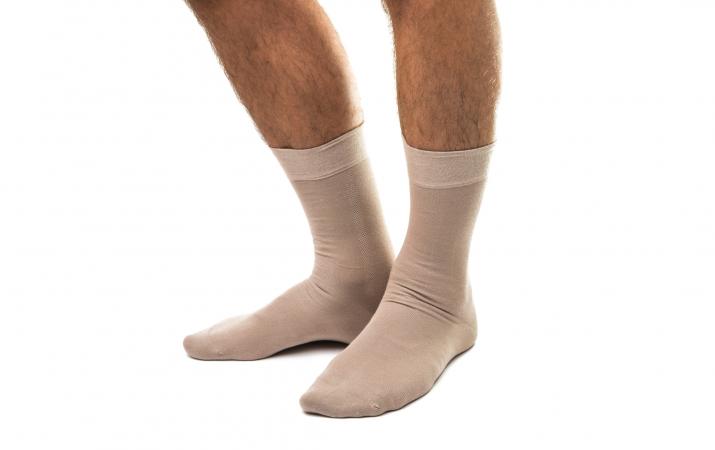 Until the late sixteenth century, both woven and knitted hose were held up by being tied to the waist of a man's doublet with laces called points. By 1540, the full-length style of men's hose was broken up into two or three different sections up the leg called stocks. Each section was sewn or tied to the one above it in order to hold it up on the leg. The lower hose, from toe to knee, were predominantly held up by garters, and, after the 1540s, were almost exclusively knitted. Through the seventeenth and eighteenth centuries, knee-length hose or stockings were worn with breeches. Garters were the most popular method for holding up one's hose until new developments created highly elastic manufactured fibers in the mid-twentieth century. From the 1770s until into the 1820s, many men padded their hose with "artificial calves" strapped to their legs, if needed, to create the shapely leg demanded by fashion ideals.

By the early twentieth century, men's hosiery was a fully diversified industry, producing a wide range of knitted garments completely shaped and finished on the frame. In the apparel industry, the term "half-hose" refers to socks or stockings that end at mid-calf or lower, and the term "hose" refers to those that end above the knee. 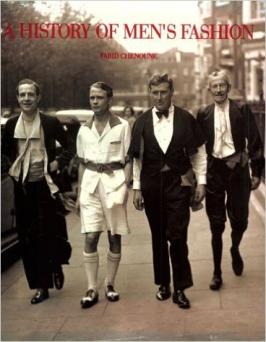