The muff, a cylindrical accessory, usually furred, into which the wearer's hands are placed on either side, was called manchon in French, mouffe in Flemish, and manicone in Italian, and was first called snuffkin, skimskyn, and snoskyn in England. Francis Weiss cites the first mention of a snuffkin in 1483 but the earliest image is in the illustration of L'Angloyse in Receuil de la diversite des habits, 1567, a small tube attached to the girdle by a cord. Furs per se were not fashionable in the English or French courts in the last thirty years of the sixteenth century, but imported skins for trims and accessories had cachet, and the muff was to prove a popular means of displaying furs and status; in 1583 a skinner named Adam Blande trimmed a velvet snuffkin with five "genette skins." Imported from Africa via Italy, the genet was exotic and expensive. The quantities of skins used suggest that the snuffkins were furred inside and out.

Fur and Other Materials

The rich source of fur-bearing animals inhabiting colonized Newfoundland, Canada, and North America provided quantities of beaver for hats and marten, mink, lynx, otter, and fox for dress and what were, by 1601, called muffs (also a double entendre for the female genitalia). Furs provided decoration and interest, contrasting with the undecorated silks worn following sumptuary legislation controlling the use of gold decoration in fabric. In Wenceslaus Hollar's Winter, 1641-1644, an English lady of fashion carries a sable or marten fur muff as befits her station, decorated with a ribbon to tie at the waist: "The cold not cruelty makes her weare/In Winter, furs and Wild beasts haire/For a smoother skinn at night/Embraceth her with more delight." Not all muffs were fur, but this contrast between smooth and hairy skins belies the notion of function over fashion and the frisson of sex; Hollar's later studies of muffs show an almost fetishistic interest in the look and feel of furs. Antoine Furetiere in his Dictionnaire universel, 1690, defined a muff as a fur object, "originally used only by women; at present, however, men also carry them. The finest muffs are of marten, the less expensive ones of squirrel. The muffs for horsemen are of otter or tiger." Ladies would also carry lapdogs in their manchons. The engravings of Bonnard and Jean de St. Jean show men of fashion carrying large muffs in lynx and otter furs suspended from the waist on a belt. 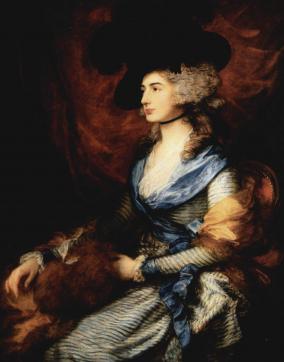 The Hudson's Bay Company was formed in 1670 and provided a supply of furs to a burgeoning middle-class consumer base. In Mundus Muliebris, the lady has "three Muffs of Sable, Ermine, Grey (squirrel)," from the most expensive to a cheaper but pretty fur. The rococo period saw delicate muffs in sable, skunk, squirrel, and sea otter, small and barrel-shaped or large and baglike; in 1765 William Cole noted with disapproval that in Paris "all the world got into Muffs, some ridiculously large and unwieldy." The Gallerie des modes et costumes français showed large muffs worn by men and women of fashion in the 1780s, one style, worn to the opera, 1784, called "d'agitation momentanee." More prosaic is Thomas Gainsborough's portrait of the actress Mrs. Siddons depicting a large fox muff, matching the trim of her silk mantle. As a supporter of Charles James Fox, Siddons is showing her political affiliations-as well as being fashionable. The wearers of the light dress fabrics of the revolutionary and early nineteenth century required warm muffs and fashion plates depict ones made from bearskins. By the 1820s and the Romantic period, faux medieval muffs in ermine or the more luxurious chinchilla were imported from Chile and Peru. In the 1860s, the fur coat, the ultimate in conspicuous consumption, became fashionable and muffs were less prominent. Muffs enjoyed revivals in the early twentieth century, when Revillon stocked over a million muffs in their shops and Vogue wrote of chinchilla, sable, leopard, mole, ocelot, and monkey muffs (Sears and Roebuck advertised coney, meaning rabbit); but muffs were less of a focus. The all-important fur item, because fur now meant status, was the coat. During World War II, there was a brief return of the accessory, which added a touch of glamour, often reworked from an old fur. American Vogue described muffs in 1940, being in skunk, Persian lamb, blue fox, broadtail, mink, and leopard. The muff, however, did not survive the war. They were unsuited to modern women who drove cars, traveled on planes, lived in heated houses, and earned their own living.

Ribeiro, Aileen. "Furs in Fashion, the Eighteenth and Nineteenth Centuries." The Connoisseur, December 1979.