Neil Armstrong uttered, "One small step for man-one giant leap for mankind" upon his first step on the moon on 20 July 1969. In Teflon-coated nylon and rubber boots, Armstrong became the first man to come into contact with an unknown, hostile extraterrestrial environment. Ten thousand years earlier, dwellers of caves in the Pyrenees emerged from the Ice Age also wearing footwear, made from the hides of the animals they hunted, to protect them from the elements and environment.

Footwear's primary purpose is to protect, but in 10,000 years of history, footwear has taken nearly every form possible to service and compliment human bodies, influenced by environment, morality, practicality, economy, and beauty. Footwear is literally the foundation of fashion. It is the only article of clothing required to come into regular contact with the earth, taking the punishment of hundreds of pounds per square inch with every step. At the same time, it is usually expected to resist dampness, comfort the foot, last a long time, and also look attractive.

Footwear has been the subject of literature and folklore. From Cinderella and Dutch clogs laid out for Sinter Claus, to tying shoes to a newlywed's car bumper, and fetish boots-footwear is steeped in tradition and cultural meaning. From biblical times, the sandal or slipper has been used as a symbol. The Assyrians and Hebrews gave a sandal as a token of good faith and to signify the transfer of property. In Jewish ritual, the shoe represents wealth as when a loved one dies, the grieving family goes shoeless during the shivah as a sign of poverty, for without the deceased they are poor.

Hot, dry climates generally saw the development of the sandal. Believed to be the world's first crafted foot covering, the sandal was a basic footwear style of the ancient Egyptians of the Nile valley and the Anasazi of the ancient American Southwest. Sandals have been the dominant footwear of Africa, Asia, and Central and South America. Their firm soles protect the feet from scorching surfaces, while the minimal uppers allow air to circulate. Sandals can be made of almost any material that is readily at hand, from woven grasses and leather to wood and even metal.

The moccasin, an Algonquian Native American word for footwear, is essentially a shoe made up of one piece of hide drawn up around the foot and sewn with no seams on the lower part. Moccasin-like foot coverings, gathered on top of the foot with a drawstring were the style of ancient northern Europeans. A descendant of this style survives in folk dress from the Balkans to the Baltic, most often referred to by its Croatian name-the opanke.

The shoe may have been the result of a union between the Roman sandallium and the opanke of northern Europe, essentially being a closed sandal. However, it is most aptly traced to the Christian Copts who developed the turnshoe in the first century. The turnshoe was made, as the names suggests, inside out and turned, with a seam along the edge of the hard sole attaching to the upper. Improvements to this style developed in Europe during the twelfth century when a welt was sewn in the seam to aid the shoe in keeping out water.

Similar in construction, boots provide protection to not only the foot, but also the lower leg. It is conjectured that boots originated in arctic Asia and over time spread across the circumpolar region. Certainly, boots are the dominant traditional footwear for natives of the coldest regions on earth, but ancient examples from Mesopotamia, among many hot climate cultures, prove that boots can also offer protection from desert heat and scrubby brush-lands, as well as insect and snakebites. Boots also developed in nomadic cultures where riders of horses or camels wore them to protect their legs from chafing.

Clogs most likely originated from the wooden-soled footwear discovered by the Romans to be worn in Gaul (ancient France). Their wooden-soled footwear was made for inclement weather, which is the origin of the modern word "galosh." Similar overshoes were made throughout the medieval period in Europe to protect good footwear from the filth of the streets. By the fourteenth century a shoe carved from one piece of wood became common for many northern European peasants who required waterproof, warm, inexpensive, and long-wearing footwear.

All footwear is based on these five historic styles. Created for different ranks, rituals, occupations, and uses, footwear can take on many looks when made of different materials and ornamentation. And the main cause for change in footwear is fashion.

From the tenth to twelfth centuries, Europe emerged from the dark ages by uniting itself into nations and developing a mercantile capitalist economy. Crusaders, sent to free the Holy land from Islamic occupation, brought back technical knowledge and fineries from the Arabs, which whetted the appetites of nobles who craved more novelty. By the fourteenth century, quality cloth and fine leathers were being fashioned into shoes that were conspicuous displays of style and elegance, worn with the purpose of expressing personal status.

During the fourteenth century, a fashion for pointed toes spread across Europe. The style originated in Poland, as it became known as the poulaine or cracow. Edicts were proclaimed limiting its use according to the wealth and social standing of its wearer. When the style fell from fashion at the end of the fifteenth century, it was replaced by wide-toe fashions, known variously as the hornbill, cowmouth, or bearpaw.

A curious woman's fashion, which was at its height of popularity during the 1590s, was the chopine-a platform-soled mule that raised the wearer sometimes as high as 39 inches (one meter) off the ground. By the time this fashion had subsided in the early seventeenth century, heels had emerged as a standard addition to both men's and women's footwear.

As Europe positioned itself into nations of power and wealth, the elite distinguished themselves from the masses through conspicuous refinement and extravagant ornamentation. Through the Rococo and Baroque arts, a noble's status was visible in everything he or she did and wore. High-heeled footwear made of expensive silks expressed the idle lifestyles and accumulated wealth of the well heeled. Buckles became a fashionable way of closing shoes during the 1660s, and a century later these large and showy objects had become the feature of the shoe. 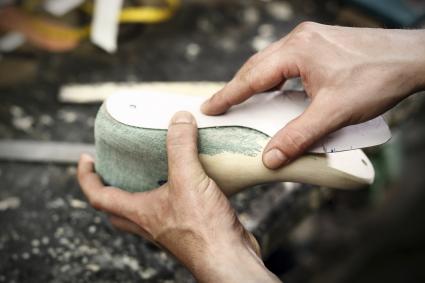 By the late eighteenth century, the industrial revolution had brought wealth to the middle classes and the French Revolution ended the divine right of the ruling monarchy. These events empowered the middle classes who would now become the brokers of taste. As everyone was now born on the same level, heels disappeared, fancy buckles were elitist and were replaced by shoelaces, and expensive silk footwear was displaced by more affordable and better-wearing leather footwear. The industrial production of shoes, beginning in the nineteenth century, made attractive, good-quality footwear affordable to almost everyone.

Fashion footwear became a commodity available to all levels of society. Its style was now disseminated through the new communicator-the fashion magazine. Elitism still existed by the quality of the shoe's construction and decoration but what became the real elitist separator was the ability to remain "au courante." Styles, materials, colors, and ornaments changed noticeably enough each season to keep the unfashionable out of the game.