The turban is essentially a headgear that uses fabric of varying width and length, which is twisted and turned around the head. The wrapped folds derived produce a "fitted effect" akin to a stitched or an engineered head covering. Though length, style, color, and fabric may vary as geographical locations change, the basic concept and construction of the turban remains unaltered. This is probably the widest and most flexible definition of this garment considering the many forms in which it exists.

Little is conclusively known of the origins of the turban. The earliest evidence of a turban-like garment is from Mesopotamia in a royal sculpture dating from 2350 B.C.E. Thus, it is known that the turban was in use before the advent of Islam and Christianity, therefore the origin of the turban cannot be ascribed to religious reasons alone. It is also mentioned in the Old Testament and Vedic literature from India. Sculpture from Central India (100 B.C.E.) provides detailed visual evidence of the use of turbans. These headdresses were originally worn by royalty and spiritual leaders and used to commute power, often being adorned with jewels and accessories to display wealth and grandeur.

In some form or another, the turban has been important in many cultures and religions. It is still in use in rural areas in Persia, the Middle East, Turkey, parts of Africa, and the Indian subcontinent where wrapped, as opposed to stitched headgear, continues to be preferred. Historically, draped clothing has always had a special significance in eastern culture. Watson notes that "certain strict Hindus still do not wear cut or stitched cloth as for them a garment composed of several pieces sewn together is an abomination and defilement" (p.11). Though turbans are worn primarily by men, literary evidence reveals that they were used by women on rare occasions in the past. "In Vedic literature Indrani, wife of Indra, wears a headdress known as usnisa" (Ghuyre, p. 68). Some of the earliest terms for the turban in English are turbant, tolibanl, and turband. These represent the French adaptation of the Turkish tulbend, a vulgarism for the term dulbend from Persia, didband, a scarf or sash wound around the neck.

In India this headdress is known by many different names locally. Potia, usnisa, pag, pagri, safa, and veshtani are some of the names used for the turban. The Sikhs, a community that dictates its followers to wear the turban, call it dastaar, while the Muslim religious leaders refer to it as the kalansuwa. In the earliest times, cotton was the fabric most commonly used as turban material. This is because it was affordable and abundant, apart from being the most comfortable fabric to use in tropical or temperate climates where it was most worn. Fabrics such as silk and satin saw limited usage among the more affluent and powerful class. Though there are innumerable variations in the turban, they can easily be divided into two broad types-long turbans and square turban pieces. The long piece is seven to ten meters long with the width varying from twenty-five to one hundred centimeters. The square pieces could vary in size between one to three meters per side, with one to one-and-a-half meters constituting the most useful size. There are an amazingly wide variety of turbans across different cultures and religions. Distinctions are made on the basis of size, shape, material, color, ornamentation, and method of wrapping. In the Muslim world, religious elders often wear a turban wrapped around a cap known in Arabic as a kalansuwa. The shape of these caps can be spherical or conical and this produces variations in the turban shape. In Iran, leaders wear black or white turbans wrapped in the flat, circular style. In the Indian state of Rajasthan the style of turban may vary even within the distance of a few miles. The Rajput turbans are remarkably different from the kind worn in any other region in India. There are specialists called pagribands whose skill is in the art of tying the turban and were employed by the erstwhile royalty for their services. Some famous styles from Rajasthan are the Jaipur pagri and the Gaj Shahi turban, the fabric of which is dyed in five distinctive colors and was developed by Maharaja Gaj Singh II from the Jodhpur royal family.

The turban as a headdress is not merely a fashion statement or cultural paraphernalia; it has symbolic meaning beyond the obvious. It serves to identify the wearer as a member of a particular group, tribe, or community, and serves as an introduction to their cultural, religious, political, and social orientations. Sikh men commonly wear a peaked turban, that serves partly as a covering for their hair, which is never cut out of respect for God's creation. The turban has significant associations with the concepts of respect and honor. A man's turban is supposed to signify his honor and the honor of his people. The exchange of turbans is considered a sign of everlasting friendship, while presenting someone with a turban is considered a great token of esteem. An exchange of turbans also signifies a long relationship and forges relationships between families. Thus, the turban is an intrinsic part of all ceremonies from birth until death.

Conversely, it is considered a grave insult to step over or pick up another man's turban. It is linked intrinsically to the "ego" of a person. To remove a turban and lay it at another's feet symbolizes submission and an expression of humbleness. The turban at a glance conveys the social and economic status of the wearer, the season, festival, community, and the region. It is also distinctive by the style of wrapping-each fold telling its own story. The tightness of the drape of the headgear, the lengths of the hanging end, the types of bands which are created on the surface, all say something about its wearer. 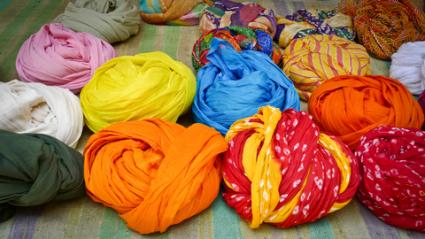 The colors of turbans vary in different cultures and are imbued with complex connotations, emotional context, and rich association. They are used to convey mood, religious values, customs, and ceremonial occasions. In India, ocher is the color of the saint, saffron denotes chivalry, and prosperity. White turbans, considered by some Muslims to be the holiest color, are used for mourning and by older men, whereas dark blue is reserved for a condolence visit. Among Sikhs of north India, blue and white cotton turbans are essentially religious in nature. In the Middle East, green turbans, thought to be the color of paradise, are worn by men who claim descent from the prophet Muhammad. Shape and size of the turban are determined by many conditions. Chief among these are the climate, status, and occupation of a person. Turbans are big and loose without hanging tails in the hot desert and thus serve a protective function. Merchants involved in more sedentary activities would wear ornamental turbans with long hanging tails.

The turban was introduced into fashionable European dress in the early fifteenth century and its usage continued until the sixteenth century. It has been revived many times in women's fashion at intervals since the sixteenth century. The turban has acquired a more contemporary form in the twenty-first century. Though it continues to exist in various parts of the world in its more traditional form, of late various fashion designers and couturiers have adapted the turban to give it a more fashionable and chic look, making it a popular fashion accessory. Even though in its more contemporary form the turban may not retain the same symbolism that is attached to its more traditional form, it nevertheless reinforces the importance of this garment.

Boucher, Francois. A History of Costume in the West. London: Thames and Hudson, Inc., 1987.

Mathur, U. B. Folkways in Rajasthan. Jaipur: The Folklorists, 1986.

Watson, John Forbes. The Textile Manufacturers and the Costumes of the People of India. Varanasi, India: Indological Book House, 1982. Originally published in London in 1866.