Veils, veiled, and veiling emphasize different aspects of related "English" terms. As a noun, a veil is a piece of fabric draped as a head and upper or full body covering that functions as an item of dress. Whether an item of clothing or adornment, veils are physically used to cover and conceal, yet simultaneously draw attention to some visual aspect of the wearer. As a verb, "to veil" refers to the act of veiling or covering and concealing some visual or social aspect of the wearer, yet possibly, still inadvertently, revealing their identity. As an adjective, veiled, differentiates between the identity of the wearer who dons a veil or head covering or veils and covers and others who don't in the a variety of social contexts.

Derivative terms for veils, veiled, and veiling and their meanings exist in other European languages such as in French (voile) and Latin (vela and velum). And elsewhere comparable terms are used for items of dress that function in a similar manner, that is, as a piece of fabric draped as a head and upper or full body covering, that covers and conceals, yet reveals the identity of the wearer and that differentiates between those individuals that choose to cover and those that do not.

Historical Overview of the Veil

The historical precedence for head coverings is vast, and references to veils, veiled, and veiling are complex. As El Guindi (1999) reviews, "veiling is a rich and nuanced phenomenon, a language that communicates social and cultural messages, a practice that has been present in tangible form since ancient times, a symbol ideologically fundamental to the Christian, and particularly, the Catholic, vision of womanhood and piety, and a vehicle for resistance in Islamic societies, and is currently the center of scholarly debate on gender and women in the Islamic east. In movements of Islamic activism, the veil occupies center stage as symbol of both identity and resistance."

Consequently, the use of the terms veils, veiled, and veiling and their comparables in other languages and cultures suggests many connotations. However, an understanding of the function and meaning of head coverings worn as veils is highly dependent on personal, social, and cultural perspectives. Frequently these views carry many ethnocentric and misogynistic representations and interpretations. Regardless of the linguistic terms used, generalizations are generational and there exist gender associations, varied social contextual variables, and cultural differentiations in veils, and veiling practices. The following descriptive and interpretive examples provide some insights in the range of people who veil or cover and are veiled or covered and the customs and cultures that govern veiling and covering practices.

Historically, the terms veils, veiled, and veiling are associated with gendered and generational status. Though not the exclusive domain of women, as an article of dress, veils are associated with "being" female. They are typically draped fabric or head and/or body coverings that are generally the clothing or adornment form worn to differentiate female gender identity from males. Whether self-imposed or otherwise, customs associated with being female vary across cultures. For example, women in "western" cultures seldom wear veils while men rarely will wear them. In contrast, in the Middle East, men and women may frequently wear similarly draped garments that cover their heads, upper and lower bodies, but women may distinguish themselves by covering a portion of their face to conceal their identity in more public spaces. The abaya is one such example that is worn in many Arabic-speaking countries. Other examples, more culturally specific in historically Persian cultures are the chador worn in Iran and the chaadar worn in Afghanistan.

Age-related use of veils, veiled, and veiling practices across cultures frequently defines the transitions between stages of the female life cycle that reference physiological development and change as it relates to social status. One critical period is between youth and puberty. Veils, veiled, and veiling are often synonymous with the notion of symbolic space and specific rites of passage such as during puberty and coming of age ceremonies. Young Afghan girls begin wearing chaadars, veils, or head coverings to signal their change in status from a young nonmenstruating girl to a menstruating young woman, a young woman who is now of marriageable age. They may even wear them "prematurely" to appear more mature than their physiological development or chronological age.

The dupatta worn by Pakistani and Indian women also are gendered and generational examples of head coverings worn by young women on the Asian subcontinent. Few women would venture in public without one, and when traveling abroad the dupatta is still worn with either indigenous or local dress. The dupatta in these instances may be shawl-or scarf-like, a draped two-dimensional form.

Somali women wear a variety of head coverings or veils that differentiate the gender and age of the wearer. A khaamar, a scarf-like item, is worn singularly or in combination with a shawl-like garment or gaarbo saar. A more religious head covering is hijab, and the most religious form is the nikaab, which completely conceals the entire face except for the eyes.

In direct contrast to Arab custom, Tuareg men from Algeria, rather than women, wear veils. However, they often leave their face uncovered when they travel or are with their family. 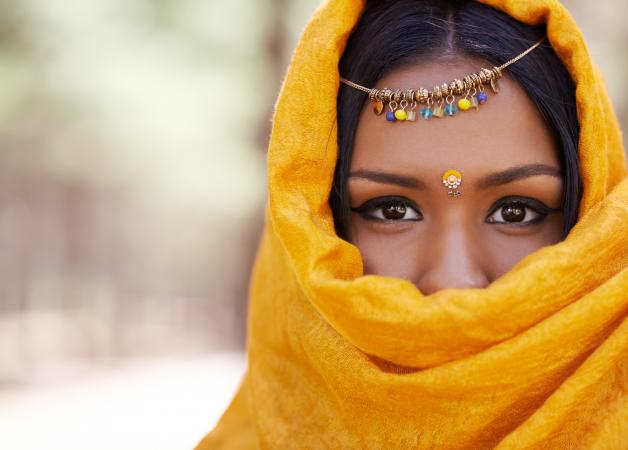 Wearing a veil and following local customs that govern female space in both the domestic and public environment may express familial status as well as female position within a family. In a Gujarati village in India, veils, or sadlo, are worn, and the custom of veiling or ghughut is practiced. As Tarlo describes, "ghughut is a form of deference and respect performed by women largely to men" (1997; 160). The local term for many variations of veiling is laj or "doing shame." Laj variations, the way and degree in which the face, head, and body are covered, communicate a female's relationship to the males in the family but also the status of the family in the community.

Veils, veiled, and veiling may also suggest a change in marital status. During a Christian wedding ceremony a bride wears a veil. The bride's father "gives her away" wearing a veil that covers her face as part of her bridal ensemble. The bride and groom recite vows then the groom uncovers the bride's face. Also at times of death, widows, in the nineteenth and early twentieth century wore a black shroud, veils or head coverings, that covered their face, and honored a deceased husband.

In a Jewish marriage ceremony, the tradition of veiling the bride is traced back to the reference to Rebecca in Genesis "Rebecca took her veil and covered herself" upon first meeting Isaac. Popular legend attributes the custom to the Biblical story of Jacob and his wives. After working for seven years for permission to marry Rachel, Jacob was tricked on his wedding day into marrying Leah, Rachel's sister (she was wearing a veil) instead. To avoid such a mishap, according to legend, the groom "checks" to be sure that it is, indeed, his bride, before her veil is lowered over her face.

These examples of familial and marital status portray veils and veiling practices as a means to control personal symbolic space such as modesty or haya-an Arabic term that encompasses many concepts, including self-respect and scruples, in addition to modesty. This is especially evident in faith-based markers of female identity. For example, during calls to prayer, Muslim women wear hijab, head and upper body coverings, as they pray either in the private domestic sphere or when praying in more public, yet segregated, mosque settings. In contrast, during confirmation ceremonies, young Christian girls dress modestly wearing white veils expressing their purity as they recite their acceptance of faith in church. In a similar fashion, religious women or nuns have worn various styles of veils or head coverings as part of their ensemble or habit, communicating purity, modesty, and devotion.

Socioeconomic distinctions highlight the aesthetic choices of veils, veiled, and veiling practices. The Pakistani woman's dupatta elaborately decorated with beads, sequins, and embroidery is a sign of social status, wealth, and prestige when worn.

Early twenty-first century examples of veils, veiled, and veiling practices focus on Muslim women and their appearance. Throughout the twentieth century, veils, veiled, and veiling practices vacillated between issues resulting from personal, social, and cultural constructions of identity. Several examples are worth noting because of reform movements and the politicization of gender, religion, and nationality. At the beginning of the twentieth century, political leaders in Turkey and Afghanistan struggled to define women's national identity through control of their appearance in public contexts. Conservative leaders struggled to maintain customary practices that reinforced Islamic Sharia codes of conduct, while other progressive leaders initiated political reforms that not only permitted, but also encouraged Muslim women to eliminate head coverings as a sign of modernity. For the duration of the century and with each new regime, religious and political leaders alike revisited "the woman question."

By the end of the twentieth century, veils, veiled, and veiling practices resurfaced as a source of contention in the geopolitical and national realm. Now the woman question became aligned with sophisticated discrimination and human rights issues in diaspora immigrant communities where Muslim women live and also in their countries of origin. In addition, Islamists fought for women's inability to choose, while feminists fought for the same women's ability to choose whether or not to wear a veil. The Taliban in Afghanistan became the most strident example of female control, forcing both Islamic and Pushtunwali strict codes of conduct regardless of religious affiliation. In the United States, female Muslim refugees struggled to maintain gender, religious, and national head covering practices in the wake of anti-Islamic dress codes. Other countries such as France, Iran, and Pakistan lobbied to self define their own head and body covering practices. 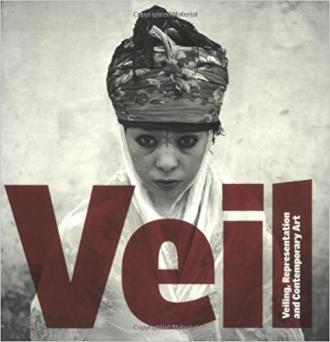 Daly, M. Catherine. "The Paarda Expression of Hejaab among Afghan Women in a Non-Muslim Community." In Religion, Dress, and the Body. Edited by Linda Arthur. Oxford: Berg, 1999.