Since the Mattel corporation introduced Barbie in 1959, the doll's relation to fashion, sex, femininity, and cultural values has been a subject of spin control, change, and controversy.

Early official accounts of Barbie's beginnings emphasized the desire of Ruth Handler, Mattel's cofounder, to produce a three-dimensional version of the paper fashion dolls her daughter, Barbara, loved. But Barbie's body actually originated elsewhere: with a German character named Lilli, who appeared in cartoon and doll form primarily as a sexpot plaything for adult men. Mattel bought all the rights and patents required to remove Lilli from that context of meaning and turned her into Barbie, the "shapely teenage Fashion Model!" announced in early catalogs.

Changes followed soon after the doll's launch, as Mattel worked to gear Barbie's persona to sales and supplementary products. In a 1961 television ad, Barbie, although still described as a fashion model, had acquired a school life, a boyfriend, and outfits for activities ranging from school lunches to frat parties: "Think of the fun you'll have taking Barbie and Ken on dates, dressing each one just right." The ad's invitation to "see where the romance will lead" illustrated Barbie's dreamy future by showing her in a wedding dress, a costume that would recur in many subsequent versions. Other outfits to come included the latest in formal wear, casual attire, sports gear, and lingerie. Many fashions were modeled after the work of contemporary designers. Sometimes Mattel enlisted designers directly, especially for the high-end offerings later created to cash in on the ever-increasing traffic in Barbie collectibles. Like designer Bob Mackie's 1991 "Limited Edition Platinum Barbie," these sometimes sold for up to several hundred dollars each.

Over the years, too, Barbie saw expanding options in one type of costume that would generate praise, humor, doubt, and derision: the career outfit. In the early 1960s, Barbie's career identities were primarily traditionally female, like nurse; largely unattainable, like astronaut; or both, like ballerina. Barbie had less work, ironically, during the burgeoning of popular feminism in the 1970s. 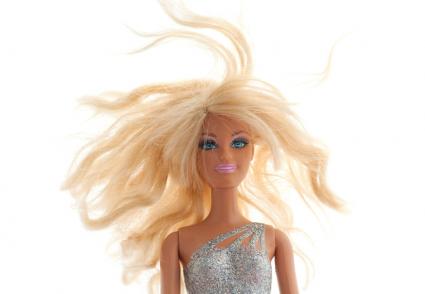 Her career life took off in the mid-1980s, however, with the Day-to-Night Barbie line. Its first incarnation presented Barbie as an executive, whose pink suit could be transformed into evening wear. She came with the slogan "We Girls Can Do Anything," a catchphrase relevant also to the range of careers that Barbie adopted into the 1990s, which included doctor, veterinarian, UNICEF ambassador, rock star, rap musician, teacher, chef, Marine Corps sergeant, and professional basketball player for the WNBA.

Besides addressing concerns about whether a girl with few apparent interests other than fashion, fun, and spending a vast amount of cash on clothes, cars (like the Barbie Ferrari), and real estate (like the famed Barbie Dream House) provided a good role model, career Barbies suited an important change in Mattel's marketing strategy. Initially, Mattel wanted consumers to supplement their first Barbie with outfits, accessories, and other characters such as Ken and Midge, Barbie's close yet distinctly unglamorous friend. In fact, the promotion for the 1967 Twist 'N Turn Barbie even offered a trade-in deal. Later, promotions became geared to the purchase of multiple Barbies. In 1992, for example, a Barbie owner interested in the rapper outfit had to buy Rappin' Rockin' Barbie, or four of them to get each of the different boom boxes. Another trend sponsored by Mattel that catered simultaneously to sales and social consciousness was the increase in Barbies of color and Barbies representing countries outside the United States. Changing statistics about how many Barbies the "average child" owns suggest Mattel's success at shifting multiple acquisitions to Barbie herself, with the number climbing from seven to ten over the course of the 1990s.

With Barbie's popularity has come increasing controversy, both about Barbie's (unrecyclable) plastic body and about the flesh to which it does, or does not, refer. To a number of critics, Barbie represents shallow feminism, focused primarily on individual success and fulfillment, and Barbie's world looks like diversity lite, peopled by innumerable white, blond Barbies, unquestionably front and center, and a much smaller number of Barbies who look like white Barbies with skin and hair dye jobs. Detractors have advanced other arguments as well: that Mattel's restriction of Barbie's dating life to boys adds yet another set of cultural narratives guiding young people to see heterosexuality as the desired, perhaps required, norm; that Barbie's impossible-to-attain proportions contribute to cultural ideals of beauty that invite self-loathing and unhealthy eating practices; and that Barbie promotes an undue focus on looks in general. Why give a girl Soccer Barbie (1999) instead of a soccer ball?

Yet as other commentators have noted, Barbie has generated a lot of play far from Mattel's official sponsorship. Mattel's WNBA Barbie may not emerge from the box with the characteristic butch flair displayed by many of her charming human counterparts, but in the hands and minds of many consumers, Barbie has been butched out, turned out, fixed up with diverse sex mates, and, of course, undressed; for a doll whose wardrobe forms the centerpiece of her reputation, she spends quite a lot of time naked. Then again, for some critics, this is Mattel's fault, too. People who like to imagine children as innocent of sexual desires have accused the company of turning their children's minds to sex with its bigbreasted adult doll. Others, conversely, have mourned what Mattel couldn't do: inspire femininity in their daughters or distaste in insufficiently truck-minded sons.

From all these diverse uses and assessments of Barbie, one certainty emerges. Barbie remains an object of attention, fascination, and, of course, purchase. Whatever her influence has been-and surely it has varied among individuals and over time-she has successfully convinced many of her importance as a symbol of femininity, as a catalyst for fantasy, and as a marker and agent of cultural values.