The United States led a clothing revolution in the nineteenth and early twentieth centuries in which clothes went from being individually made to being mass produced and from class display to democratic dress. Brooks Brothers played a major role in this revolution.

Henry Sands Brooks was forty-five years old and a provisioner to seafarers and traders when he bought a property on the corner of Catherine and Cherry Streets in the thriving business district of lower Manhattan in 1818. Calling his business H. Brooks and Company, he was intent on a new career selling quality clothing to the gentry and prosperous businessmen. It was his innovative plan, according to an advertisement he ran in the local newspaper, the Morning Courier, that same year, "to have on hand a very large stock of ready-made clothing just manufactured with a due regard to fashion, and embracing all the various styles of the day." "Ready-made" heralded the appearance of reasonably priced, mass-produced clothing that was one of the United States' greatest achievements of the nineteenth century.

Through his readily attainable, mass-produced clothing, Henry Brooks became a great innovator and marketer for the democratization of society. "Ready-to-wear placed gentlemanliness within the reach of men who once inhabited the outer reaches of society, enabling them to subscribe to its tenets and tout its virtues" (Joselit, p. 79). It was the beginning of a great cultural shift.

After Henry S. Brooks's death in 1833, the store was refurbished and enlarged by his sons-Henry Jr., Daniel, John, Elisha, and Edward-"Brooks Brothers" for the business in 1850. Manufacturing trends in mid-nineteenth-century America had begun to seriously encroach on the preindustrial world of made-to-measure clothing. The invention of the inch tape measure early in the century allowed for standardized patterns. The Wilson and Wheeler factory sewing machine, invented in 1852, was the first to be used in the clothing industry and marks the beginning of industrial methods in U.S. clothing manufacturing. As Brooks Brothers was both maker and merchant, it was able to take advantage of these inventions. The firm noted in the 1860s that an overcoat required six days of hand-sewing to make, but could be done with the help of machines in half the time (Kidwell and Christman p. 77).

Along with industrialization, population rose to 20 million by mid-century, and westward expansion increased rapidly after gold was discovered at Sutter's Mill in 1848. Brooks Brothers advertised its ready-wear clothing to the "California trade" and reaped profits for its own expansion.

As Manhattan's business district began to move northward along Broadway, Brooks opened a new store, a large four-story building at Broadway and Grand Street in 1858, which moved to South Union Square in 1869. The Broadway store became the principal place of business for the firm during the Civil War, and it was from this store that many Northern generals-including Grant, Hooker, Sherman, and Sheridan-were outfitted. Brooks Brothers also made frock coats for President Lincoln, one of which he was wearing on the fateful evening he was assassinated at Ford's Theatre in April 1865. The Brooks label on the inside of the coat was embellished with an embroidered design of an American bald eagle holding in its beak a flowing pennant inscribed "One Country, One Destiny."

By the turn into the twentieth century, Brooks Brothers was on the verge of a golden age, the period from roughly 1900 to 1970. By 1900, the modern corporation, with a new managerial class emerged, and a third of the population was urban. The firm became the clothier to this new "white collar" businessman who embodied the corporate ideal in a tailored dark suit, white shirt (or at least collar), and discreet necktie, a standard civil uniform that "served to obliterate ethnic origins and blur social distinctions" (Kidwell and Christman p. 15).

Around this time, Brooks introduced its "natural" look suit for the modern businessman. Known as Sack Suit Model #1 from that day to this, the coat had a four-button, single-breasted front, narrow lapels, center vent, and little padding in chest and shoulders, and was accompanied by narrow, flat-front trousers. It was a decidedly understated silhouette and quickly became the look of choice for the Eastern establishment. Another innovation was to incorporate a Boys' Department" (a "University Shop came later), so that parents could educate their sons in the proper appearance.

Other introductions of the early 1900s, which anglophile John Brooks (grandson of Henry) brought back from vacations in Britain, included the button-down collar, the polo overcoat, Shetland sweaters, Harris Tweed sports jackets, Argyle and Fair Isle knits, and oxford cloth shirting. It was this relaxed, country house approach to fashion that endeared Brooks to so many young men of the period and paved the way for the "Ivy League" styling that commanded the lion's share of American men's wear design from the Roaring 1920s to the revolutionary 1960s. This youthful, slim, stylish, and collegially casual image is Brooks's contribution to the United States' sartorial canon.

In 1915, Brooks moved north again with other business firms and built a handsome new flagship store at 44th Street and Madison Avenue, in noticeable proximity to the Harvard and Yale clubs and the New York Yacht Club. In a few short years, the elegant Italianate ten-story building became a mecca of discreet finery for the commercial and professional world. When the troops came home from the Great War in Europe in 1918, Brooks Brothers entered its second hundred years with a roster of customers that included politicians and generals, old guard bankers, nouveaux riches manufacturing barons, and film stars. Literary voices such as Hemingway, F. Scott Fitzgerald, and John O'Hara sang Brooks's praises in print. 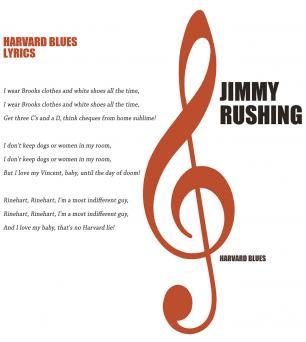 In the 1930s and 1940s, several warm-weather fabrics were introduced into its tailored clothing line, each weighing considerably less than the typical twelve-to fourteen-ounce woolens men were accustomed to wearing in the summer. Cotton seersucker, madras, tropical worsteds, and rayon at a mere nine ounces or less, reduced the weight of a summer suit from over four pounds to less than three.

With the end of World War II, the United States assumed the mantle of leadership in the West, and significant advances in automated manufacturing technology began to provide a host of consumer goods to the public.

Brooks placed its imprimatur on the gray flannel suit as the democratic uniform of choice for America's businessmen, an image soon familiarly known by several names: the "Madison Avenue Look," the "Ivy League Look," and, of course, the "Brooks Brothers Look." Casual conservative clothing with a campus flair rose to major fashion importance, as demobilized soldiers went to college with government loans on the G.I. Bill. Bermuda shorts, colorful plaid sports shirts, odd trousers, argyle hose, and penny loafers, all endorsed by Brooks, began to appear in men's closets. Modern jazz musicians such as Miles Davis, Gerry Mulligan, and Dave Brubeck helped spread the word that Ivy League styles were "the coolest."

Sale of the Company

Ironically, just as Brooks Brothers was about to reach the epitome of its popularity, the company passed out of the Brooks family's hands. In 1946, Winthrop Brooks, the "president who had piloted Brooks through a depression and a world war" (Cooke p. 67), sold the firm to Julius Garfinkel and Company of Washington, D.C. Garfinkel's was the first of many owners to acquire it (Al-lied Stores Corporation in 1981, Campeau in 1986, Marks & Spencer in 1988, and Retail Brand Alliance in 2001). 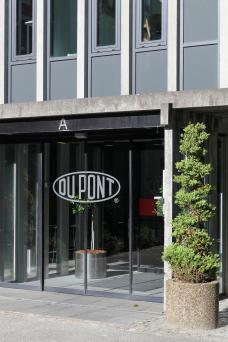 In 1952, the chemical firm Du Pont chose Brooks to develop and market a wrinkle-resistant shirt fabric utilizing its Dacron polyester fiber, reasoning that Brooks had the reputation, prestige, and credibility to popularize the concept. The following year, Brooks introduced the "wash-and-wear" shirt, and a polyester-and-cotton blended poplin fabric suit in 1958. The era of Brooks influence reached something of an apogee when, in 1961, the very Eastern establishment-looking senator John Fitzgerald Kennedy of Boston-where there had been a Brooks Brothers store since 1928-was elected President. In 1960, the New York Times referred to Kennedy as "a model of Brooks Brothers perfection," and his chosen cabinet comprised members of the Ivy League who favored Brooks-styled tweed sports jackets, club ties, and button-down shirts.

Perhaps the greatest clothing and sociological innovation of the postwar years for Brooks was the introduction of a Woman's Department in 1976, to cater to the newly emerging professional woman. At the same time, a program of accelerated expansion increased the number of Brooks stores to twenty-six and aimed at putting a store in every major shopping mall in the United States. By 1979, the firm became a recognized international retailer with the opening of a branch store in Tokyo. The Brooks Brothers style of business dress-propriety, understated elegance, and comfort-now became a global fashion statement. European designers and manufacturers began to copy the look.

In 1992, the firm initiated a "Wardrobe Concept" program of manufacturing and marketing suits as separate pieces, a technique that gained favor with other manufacturers. It also instituted a new "Digital Tailoring" approach to custom-made garments, using an automatic scanner to enter the customer's measurements into a pattern-producing computer. And, just a few years short of entering its third century, Brooks opened a large, new, more futuristic-looking store on Fifth Avenue in 1999. 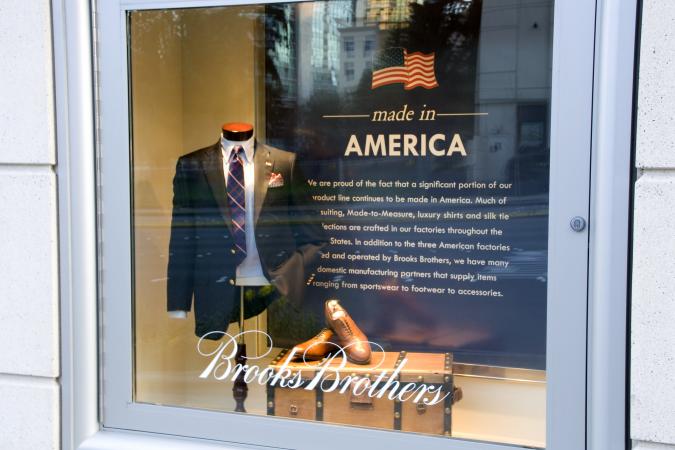 However, the tide of popularity had been turning against Brooks for some time. First, the various owners of the firm seemed to be getting farther and farther away from Brooks's sense of quality and style, and "Brooks regulars must have felt increasingly unwelcome at the front door" (Cooke p. 134). Many thought that the integrity was gone from the label and the company was doomed to a drifting mediocrity. Designers like Ralph Lauren, a former Brooks salesman, made heavy inroads. In 2001 the company was bought yet again, this time by Retail Brand Alliance. But RBA had the aim and goal of putting the "golden" back into the famous "Golden Fleece" Brooks logo. Guided by Claudio Del Vecchio, son of a successful Italian eyewear manufacturer, the firm has made cautious progress since 2001 toward regaining its prestige.