William Henry Perkin, an eighteen-year-old English chemist, was searching for a cure for malaria, a synthetic quinine, and accidentally discovered the first synthetic dye. He found that the oxidation of aniline could color silk. From a coal tar derivative he made a reddish purple dye. The brilliant purple was called mauve. The dye was not stable to sunlight or water and faded easily to the color presently named mauve, a pale purple. This discovery resulted in additional research with coal tar derivatives and other organic compounds and an entire new industry of synthetic dyes was born. In the twenty-first century, synthetic dyes are less expensive, have better colorfastness, and completely dominate the industry as compared with natural dyes. Thousands of distinctly different synthetic dyes are manufactured in the world. 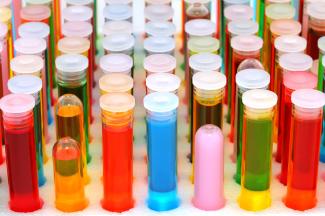 Dyes are classified by their chemical composition, the types of fibers to which they can be applied, by hue, or by the method of application. Dye molecules may attach to the surface of the fiber, be absorbed by the fiber, or interact with the fiber's molecules. Each fiber reacts differently to dyes. Fiber modifications will also react differently to the same dye. Within a dye classification, different hues will have different colorfastness.

The Society of Dyers and Colourists (SDC) and the American Association of Textile Chemists and Colorists (AATCC) classify dyes by their chemical composition. In the publication, The Colour Index International, dyes are listed by their generic name, which indicates the application class, and by a Colour Index constitution number (CI number) which indicates the chemical structure.

Acid (anionic) dyes are water-soluble dyes applied to wool, silk, nylon, modified rayon, certain modified acrylic, and polyester fibers. Fibers that will be damaged by acids, such as cellulosics, cannot be dyed with this family of dyes. The dyes in this class vary in their chemical composition but all use an acid bath. These dyes produce bright colors and have a complete color range but colorfastness varies.

Azoic (naphthol) dyes are produced within the fiber of cellulose fibers. The fiber is impregnated with one component of the dye, followed by treatment with another component, thus forming the dye. When the two components are joined under suitable conditions (a low temperature water bath is employed) a large, insoluble, colored molecule forms within the fiber. Because the color is within the fiber, colorfastness is excellent. Excess color on the outside of the fiber will rub off (crock) if not removed.

Basic (cationic) dyes are very bright but have poor colorfastness; they have limited use on cellulosic and protein fibers. Wool and silk can be dyed by basic dyes in a dye bath containing acid. Cotton fibers can be dyed by basic dyes but only in the presence of a mordant, generally a metallic salt. The colored portion of the dye molecule carries a positive charge. Basic dyes are relatively colorfast on acrylic fibers. Nylon and polyester fibers that have been modified to accept basic dyes will exhibit excellent colorfastness. The first synthetic dye, mauveine, belongs in this class.

Direct (substantive) dyes are soluble and have an affinity for cellulose fibers. An electrolyte, salt, is added to the dye bath to control the absorption rate of the dye by the fiber. The dye is absorbed by the fiber; colorfastness to light is good but colorfastness to laundering is not. Direct dyes are best used when wet cleaning is restricted. Developed direct dyes are those that are developed on the fabric after dyeing. They produce an insoluble dye that forms a chemical bond with the fiber molecules. Developed direct dyes have better wash fastness but poorer light fastness as compared with direct dyes. Both are used on lower-cost fabrics.

Disperse dyes were first developed to dye acetate fibers. Hydrophobic fibers have little affinity for water-soluble dyes. A method to dye hydrophobic fibers by dispersing colored organic substances in water with a surfactant was developed. The finely colored particles are applied in aqueous dispersion and the color dissolves in the hydrophobic fiber. Disperse dyes are the best method for dyeing acetate and polyester. Acrylic, aramid, modacrylic, nylon, olefin, and polyester are dyed by dispersed dyes; colorfastness is good to excellent. 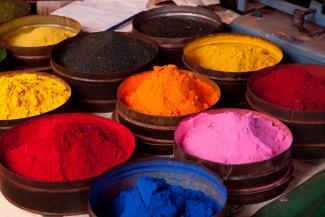 Pigment dyes are not dyes but insoluble coloring particles. Pigments are added to the spinning solution (the liquid fiber before extrusion) of synthetic fibers and become an integral part of the fiber. Colorfastness is excellent. Pigments are also printed on fabric using resin binders. The adhesive attaches the color to the fabric. Colorfastness is dependent on the binder or adhesive used rather than the pigment. Pigment printing is an economical and simple means of adding color to fabrics.

Reactive (fiber-reactive) dyes combine with fiber molecules either by addition or substitution. The color cannot be removed if properly applied. Colors are bright with very good colorfastness but are susceptible to damage by chlorine bleaches. Reactive dyes color cellulosics (cotton, flax, and viscose rayon), silk, wool, and nylon. Reactive dyes are used in conjunction with disperse dyes to dye polyester and cellulosic fiber blends. They were introduced to the industry in 1956. 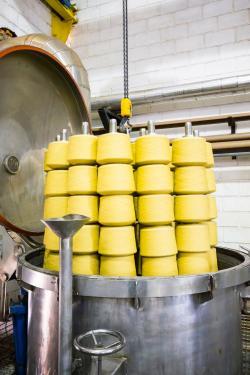 Sulfur dyes are insoluble but become soluble in sodium polysulphide. They have excellent colorfastness to water. Another advantage is their low cost and ease of application. Dark shades-black, brown, navy blue-are typical of sulfur dyes. Newer sulfur dyes are available in brighter colors. They perform well if correctly applied. They are susceptible to damage by chlorine bleaches. Sulfur dyes color primarily cellulosics, such as heavyweight cotton and viscose rayon.

Vat dyes are insoluble in water but become soluble when reduced in the presence of an alkali. Oxidizing the dyed fabric produces a water insoluble dye. The term vat dyes is derived from the large vessels used to apply the dye. The first synthetic indigo dye, introduced to the industry in 1896, belongs to this class. Vat dyes have an incomplete color range but good to excellent colorfastness. They are primarily used to dye cotton work clothes, sportswear, prints, drapery fabrics, and cotton polyester blends. (1068)