Color attracts attention, creates an emotional connection, and leads the consumer to the product (Brannon, p. 117). Color is often a primary reason why a person is attracted to and buys a particular item of clothing. A new T-shirt in a different color can help transform the look of a product year after year. Color captures a viewer's interest because it is both easily recognizable and distinctive. We often describe clothing in terms of color, such as "a blue suit."

The study of color is complex and involves light, vision, and pigment as well as science, technology, and art. In addition, colored pigment behaves differently than colored light. Although there are many models of color classification, the Munsell color system with its numeric notation for each color is widely used and accepted to describe color pigments and the color properties that relate to dress.

All pigment color systems recognize that three dimensions describe color-hue (the name), intensity (brightness/dullness), and value (lightness/darkness). All three dimensions are present in every color and every color starts with hue. Value and intensity are adjectives that describe variations of any hue (light bright green, or deep dull red, for instance). 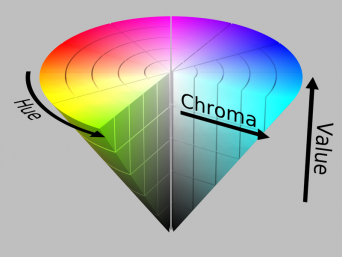 The name of the color as designated on the color wheel is its hue-the visual sensation of blue, for example. Each hue has an individual physical character: primary pigment hues are red, yellow, and blue. No other colors combine to make them, but these colors combine to make all other hues. The secondary hues, orange, green, and violet are mixtures of the adjacent primary hues; orange is a mixture of red and yellow; violet is a mixture of red and blue. The hue spectrum runs from red to violet, and is usually depicted as a circle of hues with the primary hues separated by the secondary. Tertiary hues (sometimes called intermediate) result from mixing a primary and a secondary, that is, red-orange or blue-violet.

Groups or categories of colors that share common sensory effects are often called families. Related hues (sometimes called analogous) such as blue-violet, violet, and red-violet, are adjacent on the color wheel and constitute a color family. Contrasting colors are separated from each other on the color wheel. Contrasting color schemes include complementary and split-complementary. Hues opposite each other, such as yellow and purple-blue, are called complementary because they complete the spectrum; each contains primaries the other lacks. Complementary hues can produce an afterimage of each other. If you stare at one hue for several seconds, when you glance away to a neutral surface, you will see an image of its complement. In a split-complementary scheme the color on either side of the complement is selected, green, red-orange, and red-violet, for example.

Contrasting values can affect the perception of edge in adjacent surfaces. A light value surface placed next to a dark one offers a strong visual pull to the difference between the two surfaces. Applications can be found in the value contrast between a white shirt and black trousers, light skin and dark hair, or dark hair and skin and pastel suit.

The relative purity or saturation of a color is its intensity, sometimes referred to as chroma. This dimension describes the strength of a color. Saturated colors are primary and secondary hues at their purest and strongest on the color wheel. Each hue has a range of saturation from full intensity to neutral gray. Intensity provides hue with its vividness or neutrality. Intensity yields a variety of expressions. A saturated hue is intense and usually evokes a response of excitement or energy. Less saturated hues range from nearly bright to almost muted incorporating many moods. Hues in the lowest intensities are neutral colors and often are the foundation of a wardrobe. If used together at full strength, complementary colors can vibrate. The addition of a hue's complement lowers its saturation toward neutral gray and can increase its livability.

Intensity is influenced by surface texture. Even minor surface irregularities reflect minute areas of light that cast miniature shadows; this has the effect of dulling the intensity of a color. If a fabric with a distinct weave or surface were dipped into the same dye bath as a smooth material, it would appear duller in color because of the softening effect of the napped texture. Conversely, a smooth shiny surface will make a soft color appear stronger (Goldstein and Goldstein 1960, pp. 184-185).

Psychophysical effects can be tied to hue characteristics. The temperature of a hue, the space from which it is viewed, and the color combinations used to create it can influence perception.

Color for the Individual 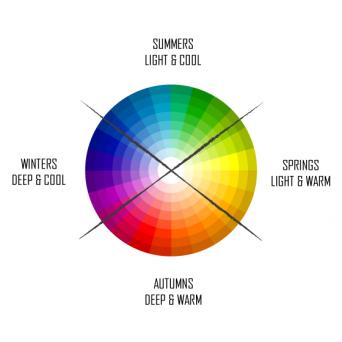 Packaging of colors for individual selection has been used to market color (Jackson 1981; Pinckney and Swenson 1981). Color selection for clothing is based upon colors that are grouped according to some easily remembered system, such as nature's seasons. Winter and spring colors are described as clear, vivid, and bright, while summer and fall are less intense. Winter and summer colors are cool; spring and fall colors are warm. Personal color analysis systems range from offering small pre-packaged color palettes, to specifically selected colors for each individual.

The Color Key system categorizes color according to warm or cool overtones that contain all basic hues, values, and intensities (Brannon 2000). Color Key 1 consists of cool, clear colors and Color Key 2 includes warm, earth tone colors; each has a corresponding color fan of paint chips that can be used to coordinate paint for interiors and apparel colors. This color key system implies that people will look and feel better when surrounded by colors that reflect their personal coloring.

Warm hues, light values, and strong intensities seem to advance while cool hues, dark values, and desaturated hues recede. Hues that advance also expand a shape. Warm colors and dark values are perceived as dense or solid and are often associated with muted earth tones such as brick or red-orange, ocher, or golden brown. Cool colors seem to reduce a shape. Cool hues and light values are associated with air, distant mountains, and water and may present an appearance of distance, depth, shadow, coolness, and lightness.

Hues viewed singly can produce an afterimage and this affects colors on the body. When the viewer concentrates on a clothing surface and then glances at the face, the skin can appear to take on tinges of the complement to the hue of the clothing. Thus after looking intensely at a green sweater, a viewer who glances up at the face may find it tinged with the complement, red.

Whether a hue is directly surrounded by another hue or is separated in some way will influence its perceptual effect. When individual colors are separated by black or white, both their singleness of character and their inter-action are suppressed somewhat. Black causes adjacent hues to seem lighter and more brilliant; a surround of white often appears to darken them.

Colors combined in very small patterns or woven together appear to mix visually. When two or more colors are interwoven onto one surface the result can be more vibrant than a surface of just one color. Complementary hues or black and white threads woven together will create a surface that appears gray or neutral when viewed from a distance. If the size of the black and white threads is increased, a salt-and-pepper effect is created.

Color and the Body

Color and dress enter a relationship with color and the body. As a composite of colors, human coloration can be analyzed in the same way as other pigments to predict the effects of color in dress. Similarity of any of the attributes of colors placed upon the body can form a powerful visual relationship with the body.

By matching, naming, and locating personal body colors, an individual can begin to understand color relationships. Intensity is a difficult dimension of color to describe when applied to body colors because the skin surface requires noting small and subtle differences. "Highlights" in one's personal coloring may include areas of the hair, skin, or eyes that seem more intense than other areas. "Undertone" is used to describe underlying colors of skin and hair. Identifying both highlights and undertones for an individual helps in placing colors on the body that are related by similarity or contrast. 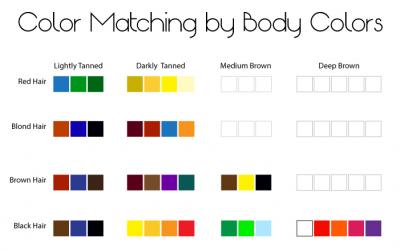 Color as a Source of Association

Color is associated with many natural objects of similar color and therefore can acquire similar meaning according to that association. Sunshine is yellow and warm: yellow is warm. Blue is cool and distant as the mountains and water. Red is exciting like fire and in many cultures red signals danger. Mood is associated with color, too; we have the "blues," or we are "green" with envy.

Colors may be associated symbolically with specific peoples or historic periods. In the 1960s in the United States, psychedelic colors were symbolic of the decade and included combinations of intense hues of pink, yellow, blue, green, and purple. Koreans favor celadon green, a pastel blue-green, because of its traditional association with pottery and ceramics, and white is used for mourning dress in Korea (Geum and DeLong).

Human response to colors can be measured and identified both collectively and individually, and psychologists have studied the formation of and reaction to color preferences. Eysenck (Brannon 2000) published research in 1941 that showed a consistent order of color preferences in adults: blue, red, green, purple, yellow, orange. According to Itten (1973) people have subjective individual preferences that include dimensions of hue, value, and intensity. The Lüscher Color Test (1969) links personality to color preferences. Subjects are asked to arrange color chips in order of preference and the results are analyzed to take into consideration both the meaning and impact of the colors as selected.

Color is rated as the most important aesthetic criterion in consumer preference (Eckman, Damhorst, and Kadolph 1990). Because color is a complex phenomenon, marketers can present merchandise in coordinated colors in an effort to help the consumer select purchases. When a line of clothing is color coordinated, wardrobe planning may seem less difficult to the consumer. Designers and manufacturers may coordinate colors within a season, or from one fashion season to another so that colors of a suit from the past season will coordinate with a shirt the next season. Selections of cosmetics are a part of color coordination of the body in a clothing ensemble and may be linked to personal coloring or to one's wardrobe colors.

Color has had a fashionable aspect historically. Editors of contemporary fashion often cite a color for a season as a means of marketing clothing. History is often recognized by the colors or color combinations fashionable at the time. Examples include the raspberry pink and lime green of mid-twentieth century, or the pastels and filmy light tints at the end of the nineteenth century.

Forecasters take advantage of the importance attached to color by advancing a color palette for a given season. Color forecasting began in 1915 (Brannon 2000) and is based upon analysis of cultural demographics and color patterns. A cyclical pattern of color coordination occurs from High Chroma, Multicolored, Subdued, Earth Tones, Achromatic, Purple, and then back to High Chroma (Brannon 2000).

Color is used for brand identification. Conceived broadly, this could include a designer's line of clothing or the introduction of a single color. Ralph Lauren tends to select middle value hues of low intensity for his depiction of "traditional" values. Elsa Schiaparelli introduced a single identifier, "shocking pink."

Mathis, Carla Mason, and Helen VillaConnor. The Triumph of Individual Style: A Guide to Dressing Your Body, Your Beauty, Yourself. Cali, Colombia: Timeless Editions, 1993.

Meyers, Jack Fredrick. The Language of Visual Art: Perception as a Basis for Design. Chicago: Holt, Rinehart and Winston, Inc., 1989.