The Oxford English Dictionary notes that the first recorded reference to the word "tailor" was made in 1297. By that date, guilds for tailoring, weaving, and cloth merchants were well established in Europe.

Boyer (1996) outlines that the Renaissance period saw a change from the loose robe, formed from one or two pieces of fabric draped around the body, to garments that were constructed by methods of cutting and sewing to follow the contour of the human form. This period also witnessed a shift from "homemade" to artisan and craftsman constructed garments. The division of labor in this latter professionalized sphere was divided into that of the cutter and the tailor. The cutter would make a paper pattern and cut the fabric while the tailor would construct the garment using sewing techniques. These craft skills were seen as both art and science and jealously guarded.

There have not been major changes in the process of cutting traditional tailored garments since the sixteenth century. The changes that have occurred have been more related to the mass-customization of tailored garments. There are still Master Tailors working today in Savile Row (London) and other major cities around the world who continue the traditional approach to tailoring methods and skills. It is in this world that the cutter may well advise the customer on their choice of cloth before taking the measurements, with a tape measure, writing down the figuration and style details that will form the worksheet for the finished product.

The cutter will meet the customer again when the garment is ready for the first fitting. The number of fittings can vary. Until relatively late in the twentieth century, it used to be as many as three, but today it is more often one fitting. The cutter "fits" the garment making adjustments using a series of chalk marks as instructions for recutting and for the tailor to follow to achieve a successful, well-fitting set of clothes. The cutter is responsible for producing the pattern, then marking and cutting the fabric. Sometimes an undercutter (striker) or apprentice will assist in this work.

First the client is measured to access the figure type. Then a pattern is cut in a card or paper. The fabric is laid onto the cutting table and inspected for any defects. The pattern pieces are positioned to ensure economic use of the fabric. The pattern is marked using a white cake of chalk, and then manipulated for any changes in the client's figure. Then the inlays are marked (extra fabric above the seam allowance to allow for future adjustments). The trousers may be drafted directly onto the fabric without using a pattern. 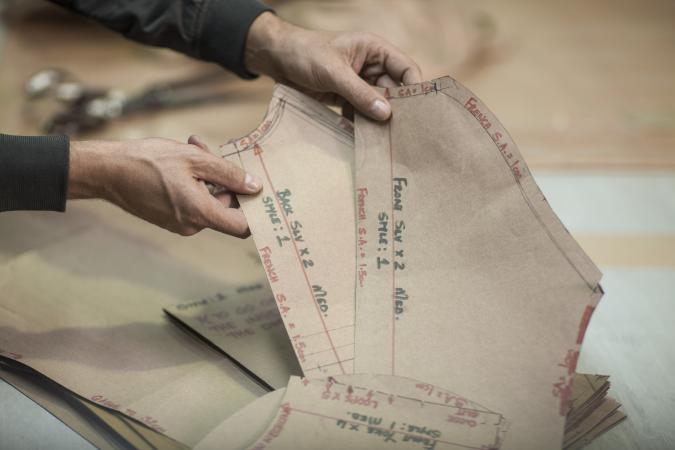 This process could include the use of block patterns. These are a set of patterns previously produced by the cutter for general use across all sizes and adjusted to each client's measurements.

When the marking is complete, the fabric is cut using traditional tailor's shears. When all the parts are cut they are passed to the "trimmer," who will thread mark the seam lines using cotton thread and cut the linings and interlinings. The cut parts are then rolled into a bundle ready for the tailor.

The cutter's tools include: shears, tape measure, chalk, set square (wooden), and a ruler (wooden). There have been some innovations which include a change from a clear-linen to a printed-linen tape measure.

The cut and style of tailored garments are usually unique to the "house" or the company. The cutter will build a reputation for a particular style of cut. Earlier cutting methods involved cutting shapes that were recut after the fitting of the garment and copied onto card or paper to establish a pattern. These patterns were developed into block patterns for future use. This helped to move the process forward without having to return to the start point with each new client and/or garment. A library of patterns would then be built up. 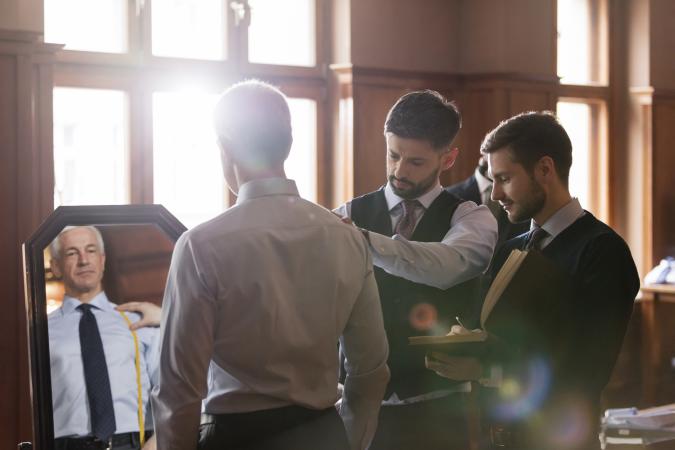 The taking and recording of measurements is still under the ownership of the cutter and is often closely guarded. Before the mid-1800s the cutter usually used a plain white linen tape onto which he would write using hieroglyphics to keep the exact nature of the measurements and figuration strictly to himself. It has been recorded that other methods of measuring using leather, parchment, and paper (Wampen 1863) was used by early cutters. The introduction of the printed tape measure was an important step forward, which, along with more accurate pattern cutting, allowed for the sharing of information.

The system of cutting from direct measurements and adding tolerances (for example, half chest measure plus 21/2 inches) continued until the mid-1800s. Cutting became more scientific from the early 1800s with publications, which included The True Principles of Scientific Cutting (Good, 1842). In his book Mathematical Instruction Constructing Modes and Draping the Human Figure, Wampen (1863) uses "anthropometry" as the basis for his measuring system and makes references to "proportional measure" for the cutting instructions. The written instructions follow an alphabetic code identifying body points as A, B, C, etc., and uses formulas, such as B'=3u+u=4u, rather than direct measurements. Reference is made by Humphreys (Coat Cutting, 1881) to using scales based on half the chest measure. He refers to "Graduation Tapes," available from the "Tailor and Cutter" for cutting different sizes of garments. When the scale is used as a basis for cutting a jacket, it is based on half the chest measure-36 chest is an 18 scale. Different body proportions are then calculated using the scale rather than taking a direct measurement.

The use of body scanning for both size surveys and cutting made-to-measure garments has developed during the 1990s, and research is ongoing with a number of industrial and academic collaborators. The process includes full-body scanning, recording information that builds the basis for individualized pattern construction. The linkage through CAD/CAM systems extends into cutting systems and interfaces with sewing systems for the assembly of custom garments.

Modern Tailor, The. Outfitter and Clothier, 1936.

Boyer, Bruce G. The History of Tailoring: An Overview. 1996. Available from http://www.lone-star.net/mall/literature/tailor4.htm .