Born Lee McQueen in the East End of London in 1969, Alexander McQueen was the youngest of six children to a taxi driver and a social history teacher. He left school at the age of sixteen and started an apprenticeship with the Savile Row tailors Anderson and Sheppard. From there McQueen moved to the tailors Gieves and Hawkes, the theatrical costumers Bermans and Nathans, the designer Koji Tatsuno in London, and (at age twenty) to Romeo Gigli in Milan. Returning to London in 1990, he sought employment teaching pattern-cutting at Central Saint Martins College of Art and Design; instead, despite his lack of formal fashion training, he was offered a place in the fashion design course as a graduate student. He was awarded the master of arts degree in 1992. After leaving college, McQueen claimed unemployed social security benefits and feared criminal prosecution if caught working for money. He then began designing under the name of Alexander McQueen, continuing to claim benefits as Lee McQueen. His graduate collection was bought in its entirety by the influential stylist Isabella Blow, at that time a Vogue fashion editor, who went on to promote and encourage his work over several years.

"He takes ideas from the past and sabotages them with his cut to make them thoroughly new and in the context of today.… He is like a Peeping Tom in the way he slits and stabs at fabric to explore all the erogenous zones of the body." 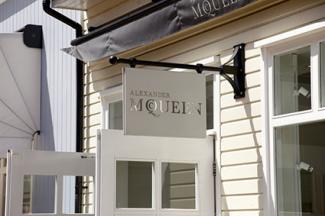 As Alexander McQueen he immediately started his own label, first showing in autumn-winter 1993. His early collections, such as Nihilism (spring-summer 1994) and Highland Rape (autumn-winter 1995) relied on shock tactics rather than wearability, a strategy that helped him establish a strong identity. With their harsh styling, the designs in these collections explored variations on the themes of abuse and victimization. They frequently featured slashed, stabbed, and torn cloth, as well as McQueen's brutally sharp style of tailoring. He introduced extraordinary narrative and aesthetic content to his runway shows. Styling, showmanship, and dramatic presentation became as important as the design of the clothes; models walked on water, were drenched in "golden showers" on an ink-flooded catwalk, or were surrounded by rings of flame. The shows were put together on minimal budgets, assisted by models, makeup artists, stylists, and producers prepared to work for nothing. His creative director, Katy England, played an important role in both the development of his aesthetic and the design and styling of his shows. At this stage McQueen began collaborations with designers such as Dai Rees and the jewelers Shaun Leane and Naomi Filmer, whose accessories and jewelry he used in his shows. Besides these activities, he also worked with innovative film, video, and pop producers.

McQueen played up to his bad-boy reputation, opening himself to accusations of misogyny in his Highland Rape collection, which featured apparently bruised and battered models staggering along an apocalyptic, heather-strewn runway, and baring his backside to the buyers at the New York version of his Dante show (autumn-winter 1996). His commercial sense, however, was as sharp as his tailoring, and his antics and anecdotes were always to a purpose, be it to attract press, buyers, or backers. The Dante show in New York, for example, elicited an order from Bergdorf Goodman. From the start McQueen understood the commercial value of shock tactics in the British fashion industry, which had almost no infrastructure despite its reputation for innovation. After he had acquired his first backer, he toned down, while not entirely losing, the outrageous content of the shows. Other important developments for McQueen occurred in 1996. Late in that year he changed his backer to the Japanese corporate giant Onward Kashiyama, one of the world's biggest clothing production houses; it also backed Helmut Lang and Paul Smith. Its subsidiary, Gibo, produced the McQueen line. In October he was appointed designer in chief at Givenchy in Paris, replacing John Galliano, who went to Christian Dior. Also in 1996 McQueen was named the British Designer of the Year-a success he repeated in 1997 and 2001.

McQueen and Galliano thus spearheaded an assault on Paris-based fashion by young British designers in the 1990s, and their iconoclastic imagery and show techniques did much to boost a flagging French business. The appointment to Givenchy brought with it the backing of the conglomerate LVMH (Moët Hennessy Louis Vuitton), which allowed McQueen to continue his uncompromising design style for his own label. While he toned down the rougher edges of his style for Givenchy, in both the Givenchy and McQueen collections he continued to develop themes that had been with him since graduation. Darkly romantic, with a harsh vision of history and politics, McQueen's approach differed from the more straightforwardly romantic output of Galliano or Vivienne Westwood. His inspirations were as likely to be cult films by Stanley Kubrick, Pier Paolo Pasolini, or Alfred Hitchcock; seventeenth-century anatomical plates; or the photographs of Joel-Peter Witkin, as his predecessors in the pantheon of fashion design. His early designs included the low-slung and cleavage-revealing "bumster" trousers; he maintained a fascination with highly structured corsets and tailoring, as well as with historical cut and detailing. However, in the late 1990s the victimized look of his early models gave way to an Amazonian version of female glamour as a form of terror. Growing up with an older sister who was a victim of domestic violence, McQueen has said that as a designer he aimed to create a vision of a woman so powerful that no one would dare to lay a hand on her.

In tandem with his commercial work, McQueen continued to collaborate with photographers such as Nick Knight and Norbert Schoerner in publishing projects, and to work with those outside the fashion world, such as the artist Sam Taylor-Wood and the musician Björk. Whereas his sharp tailoring was sold in shops, his dramatic, unique showpieces that never went into production were in demand from art galleries and exhibitions across the world.

McQueen sold a controlling share in his business to Gucci in December 2000 and left Givenchy early in 2001, continuing to show under his own name in Paris rather than London. His role as creative director of the company permitted him to retain creative freedom as a designer, while the backing of Gucci-owner of Yves Saint Laurent, Stella McCartney, and Balenciaga-facilitated the transition of his business from a small-scale London label to a global luxury brand. In March 2001 he launched his custom-made menswear line in collaboration with the Savile Row tailors Huntsman. That year McQueen also opened a flagship store in New York and, in 2003, two more in London and Milan. He launched his perfume, Kingdom, in 2003 as well, the same year that the Council of Fashion Designers of America named him International Designer of the Year and that Britain awarded him a CBE (Commander of the British Empire) for his services to the fashion industry. McQueen was found dead in his Mayfair, London apartment on Feb. 11th, 2010. Suicide was dermined as the cause of death.

Arnold, Rebecca. Fashion, Desire, and Anxiety: Image and Morality in the Twentieth Century. London and New York: I. B. Tauris, 2001.