Ann Demeulemeester (1959-) was born in Courtrai, Belgium. When she presented her first winter collection in Paris in 1987, six years after graduating in fashion design from the Royal Academy of Fine Arts in Antwerp, the press release described her work as "a collection for the conscious woman." The text went on to say, "[her] inspiration sources are neither directly definite nor visual; the clothes are brought about by personal impressions. A logical evolution, that is a result of a purification of ideas, which forms a specific style with its own atmosphere." These words seemed appropriate in the early twenty-first century, as Demeulemeester's work could be read as an interpretation of a very personal universe-one that was not immediately traceable, but could be felt in every article of apparel she designed. At their core lay the study of form and the development of a personal signature, rather than introductions of new trends or fashions or working around seasonal themes. For Demeulemeester, designing was a form of problem-solving. In a rational, almost scientific manner, she sought a solution for each "problem," often over several successive seasons. Cut and pattern were explored until the solution presented itself and perfection was achieved.

The experimental subject in this design laboratory was the designer's own body. Demeulemeester consistently tried out new creations on herself or on a select number of friends. The semiscientific aspect of Demeulemeester's creative process was in stark contrast with her ultimate silhouettes, which bore witness to intense emotion and extensive experience of life. However exhaustively thought out the cut may have been, the result was never sterile. The nonchalance that characterized her style was natural yet profoundly investigated; it was never just a matter of course. This dichotomy in Demeulemeester's creative process distinguished her entire oeuvre. Ann Demeulemeester sought out paradox; she seemed to go along with a certain duality or opposition in order to ultimately undermine it. Her investigation was in fact a study in search of balance, with the underlying thought that perfect balance is unattainable, just as the symmetrical body is in fact nonexistent-and for the designer, perhaps of no interest anyway. The shortcomings, the incompleteness, and the voids are what generate artistic creation. It was this continual search that lay at the root of Ann Demeulemeester's drive and passion-or as the text on a T-shirt and invitation suggested: Aimer, c'est agir ("to Love is to act").

Motion was a leitmotif throughout Demeulemeester's work. The challenge of gravity, a force that allows apparel to appear to be in motion even when its wearer is standing still, was technically explored in ever new applications, season after season. One symbol of this investigation was the feathers that reappeared in each new collection in the form of necklaces or jewelry, chosen for their beauty and natural perfection.

We are accustomed to the fact that gravity causes everything to fall, so how does one mislead a law of nature? How does one dislodge the balance of human form into balance, and how does one cut an article of clothing so that it looks as though it is being blown open? How does one summarize the beauty of a T-shirt that just happens to glide off the shoulder? Questions of this nature served as starting points for collections in which the different movements of Demeulemeester's models repeatedly accentuated and revealed different parts of the wearer's body-shoulders, stomach, or hips.

Unforgettable pieces in this context included Demeulemeester's asymmetrically-cut trousers that revealed part of the hips. Whether or not these garments were held up with a subtle ribbon, they looked as though they were just on the verge of sliding to the floor. The movement was subtle yet introduced a hint of danger. Such techniques as drapery and asymmetrical cut as well as ribbons and belts provided the technical tools. When gravity could not be conquered, Demeulemeester made use of ribbons or belts-which had evolved into fetish elements in her collections-to hold the fabric against the wearer's body.

The designer felt a need to find different ways to develop an article of clothing without traditional pattern techniques. Demeulemeester's 1998 winter collection began with a piece of cloth into which she cut holes for her arms. Careful observation of what subsequently happened to the fabric led her to develop a number of wrapping techniques, which in turn produced new forms. In her winter collection for 1999, she pushed this approach even further by applying the wrapping techniques to sheepskin. The result was a most unexpected interpretation of the mouton-retourné.

The feeling of motion and nonchalance in Demeulemeester's work found its counterweight in her elegant jackets and pantsuits of the 1990s, which exuded a certain discipline and masculinity. Perfect in cut and shoulder line, here too, it was such details as an asymmetrically-buttoned blouse or the selection of a subtly hanging fabric, for example, that softened the severity of the whole. In her 1997 winter collection, both aspects came together in a jacket that closely hugged the body on one side with the help of a belt, but fell loosely on the other side.

Alongside Demeulemeester's use of such supple fabrics as rayon, viscose, and silk, she had a passion for leather and fur, two hard-to-control materials that combine such opposites as aggression and tenderness. The tough character of the materials was undermined by the manner in which they were worked into the final pieces. One need think only of her elegantly draped wraparound jackets in fur (autumn-winter 2000-2001) or the jackets with large imposing capes that were produced in the finest leather for her 2002-2003 winter collection. The materials symbolized what the total silhouette demonstrated: the "wild warrior" versus the "fragile innocent girl."

A third noteworthy material was white painter's linen or canvas, which Demeulemeester initially used for invitations, catwalks, the interior of her shop in Antwerp, and a table she designed in 1995-for which she was awarded the first prize in design from the Flemish Community. Demeulemeester first worked this white canvas into her apparel collection in 1999. Since Demeulemeester studied art before going into fashion design, she was especially fascinated by the nude female body and its proportions-a factor that continued to play a central role in her fashion design. Beginning from nothing, from empty space or nudity, in order to then add only the essentials without excess decoration, translated equally strongly into her emphatic choice of black and white, the two extremes of the color spectrum-a choice that is both hard and poetic. In the same way that a black-and-white photograph can embody the essence of an image, Demeulemeester was more interested in nuances, shadows, and forms than in decoration and color.

Demeulemeester showed her first collection for men in 1996, which was presented together with her collection for women. For Demeulemeester, men and women are not opposites, but rather form a balance around the same extremes. The flow and interchange of masculine and feminine characteristics could be found in the mannequins who modeled her clothes, in the punk singer Patti Smith (her frequently mentioned and quoted muse), but above all in the apparel itself. It is worth noting here that tough-looking shoes or boots more than once formed a symbolic counterpoint within one of Demeulemeester's silhouettes, such as her 1998 shoe, which mounted a man's shoe form on a high heel. 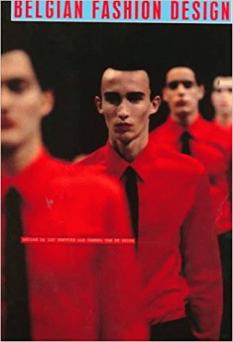