Azzedine Alaïa was born in southern Tunisia in about 1940 to a farming family descended from Spanish Arabic stock. He was brought up by his maternal grandparents in Tunis and, at the age of fifteen, enrolled at l'École des beaux-arts de Tunis to study sculpture. However, his interest in form soon diverted him toward fashion. Alaïa's career started with a part-time job finishing hems (assisted at first by his sister, who also studied fashion). He became a dressmaker's assistant, helping to copy couture gowns by such Parisian couturiers as Christian Dior, Pierre Balmain, and Cristóbal Balenciaga for wealthy Tunisian clients; these luxurious and refined creations set a standard for excellence that Alaïa has emulated ever since.

In 1957 Alaïa moved to Paris. His first job, for Christian Dior, lasted only five days; the Algerian war had just begun and Alaïa, being Arabic, was probably not welcome. He then worked on two collections at Guy Laroche, learning the essentials of dress construction. Introduced to the cream of Parisian society by a Paris-based compatriot (Simone Zehrfuss, wife of the architect Bernard Zehrfuss), Alaïa began to attract private commissions. Between 1960 and 1965 he lived as a housekeeper and dressmaker for the comtesse Nicole de Blégiers and then established a small salon on the Left Bank, where he built up a devoted private clientele. He remained there until 1984, fashioning elegant clothing for, among others, the French actress Arlette-Leonie Bathiat, the legendary cinema star Greta Garbo, and the socialite Cécile de Rothschild, a cousin of the famous French banking family. Alaïa also worked on commissions for other designers; for example, he created the prototype for Yves Saint Laurent's Mondrian-inspired shift dress.

By the 1970s, in response to the changing climate in fashion, Alaïa's focus shifted from custom-made gowns to ready-to-wear for an emerging clientele of young, discerning customers. Toward the end of the decade he designed for Thierry Mugler and produced a group of leather garments for Charles Jourdan. Rejected for being too provocative, they have been kept ever since in Alaïa's extensive archive. In 1981 he launched his first collection; already favored by the French fashion press, he soon found international success. In 1982 he showed his prêt-à-porter, or ready-to-wear, line at Bergdorf Goodman in New York, and in 1983 he opened a boutique in Beverly Hills. The French Ministry of Culture honored him with the Designer of the Year award in 1985. He has dressed many famous women, such as the model Stephanie Seymour, the entertainer and model Grace Jones, and the 1950s Dior model Bettina. Moreover, Alaïa was the first to feature the supermodel Naomi Campbell on the catwalk.

In the early 1990s Alaïa relocated his Paris showroom to a large, nineteenth-century, glass-roofed, iron-frame building on the rue de Moussy. There he lives and works, accompanied by various dogs, and his staff, regardless of status, eat lunch together every day. Partly designed by Julian Schnabel and adorned with his artwork, the building's calm, pared-down interior, glass-roofed gallery, and intense workshops resemble a shrine to fashion. Alaïa has always been a nonconformist; since 1993 he has eschewed producing a new collection every season, preferring to show his creations at his atelier when they are ready, which is often months later than announced. 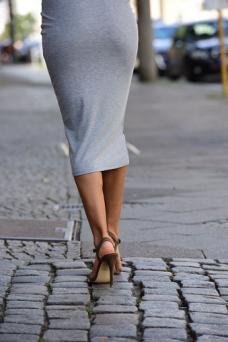 Alaïa's technique was formed through traditional couture practice, but his style is essentially modern. He is best known for his svelte, clinging garments that fit like a second skin. Although he is revered in the early 2000s, the 1980s were in many ways Alaïa's time; his use of stretch Lycra, silk jersey knits, and glove leather and suede suited the sports- and body-conscious decade. The singer Tina Turner said of his work, "He gives you the very best line you can get out of your body…. Take any garment he has made. You can't drop the hem, you can't let it out or take it in. It's a piece of sculpture" (Howell, p. 256).

Alaïa has described himself as a bâtisseur, or builder, and his tailoring is exceptional. He cuts the pattern and assembles the prototype for every single dress that he creates, sculpting and draping the fabric on a live model. As he explains, "I have to try my things on a living body because the clothes I make must respect the body" (Mendes, p. 113). Although his clothes appear simple, many contain numerous discrete components, all constructed with raised, corsetry stitching and curved seaming to achieve a perfect sculptural form. Georgina Howell wrote in Vogue in March 1990:

"He worked out dress in terms of touch. He abolished all underclothes and made one garment do the work. The technique is dazzling, for just as a woman's body is a network of surface tensions, hard here, soft there, so Azzedine Alaïa's clothes are a force field of give and resistance. (p. 258) "

Whether applied to his haute couture, tailoring, or ready-to-wear lines, Alaïa's work is typified by precision and control; these characteristics apply even to his designs for mail-order companies, such as Les 3 Suisses and La redoute. He survived the 1990s without glossy advertising campaigns and without compromise, and in 2001 Helmut Lang paid tribute to Alaïa's work in his spring and summer 2001 collection.

Alaïa is a perfectionist and has been known to sew women into their outfits in order to get the most perfect fit. Often accompanied by his friend, confidante, and muse, the model and actress Farida Khelfa, he is of small stature and invariably dresses in a black Chinese silk jacket and trousers and black cotton slippers, declaring that he would look far too macho in a suit. Alaïa's work has been shown in retrospectives at the Bordeaux Museum of Contemporary Art (1984-1985) and the Groninger Museum in the Netherlands (1998), and in the exhibition Radical Fashion at the Victoria and Albert Museum in London (2001). In 2000 Prada acquired a stake in Alaïa; the agreement contains the promise of creating a foundation in Paris for the Alaïa archive, which includes not only his own creations but also designs by many twentieth-century couturiers, such as Madeleine Vionnet and Cristóbal Balenciaga. Alaïa said, "When I see beautiful clothes I want to keep them, preserve them…. clothes, like architecture and art, reflect an era" (Wilcox, p. 56). 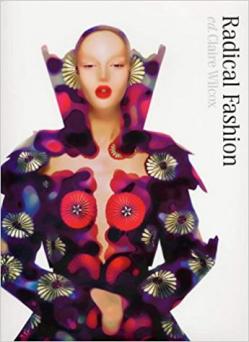