One of America's foremost designers in the second half of the twentieth century, Bonnie Cashin (1908-2000) was a pioneer in the sportswear industry, specializing in modular wardrobes for the modern woman "on the go." Her lifelong interest in clothing design, however, encompassed a number of careers on both American coasts. Growing up in California, Cashin worked as an apprentice in a series of dressmaking shops owned and operated by her mother, Eunice. In her teens she worked as a fashion illustrator and dance costume designer. Between 1943 and 1949 she costumed more than sixty films at Twentieth Century-Fox. It was not until midcentury, when she was over forty years old, that she began designing the ready-to-wear for which she became best known.

Cashin favored timeless shapes from the history of clothing, such as ponchos, tunics, Noh coats, and kimonos, which allowed for ease of movement and manufacture. Approaching dress as a form of collage or kinetic art, she favored luxurious, organic materials that she could "sculpt" into shape, such as leather, suede, mohair, wool jersey, and cashmere, as well as nonfashion materials, including upholstery fabrics. Cashin's aim was to create "simple art forms for living in, to be re-arranged as mood and activity dictates" (Interview 1999).

As a girl moving along the California coastline, Cashin developed a love for travel and a keen eye for the clothing of different cultures, which would underpin her later professional work. This interest in "why people looked the way they did" placed her in good stead to begin work in 1924, alongside Helen Rose, as a costume designer for the Los Angeles dance troupe Fanchon and Marco. In 1934 her producers took over performances at New York's Roxy Theater and asked Cashin to join them as costumer for the Roxyette dance line, the precursors and rivals to the Rockettes.

In 1937 the Harper's Bazaar editor Carmel Snow, an admirer of Cashin's costume designs, encouraged Bonnie to work in fashion and arranged for her to become the head designer for the prestigious coat and suit manufacturer Adler and Adler. Owing to the wartime focus on American fashion design, she became so well recognized that she was commissioned to design World War II civilian defense uniforms and was featured in a Coca-Cola advertisement. By 1942, however, Cashin felt boxed in by wartime restrictions. She returned to California to sign a six-year contract as a costume designer with Twentieth Century-Fox.

Cashin designed costumes for the female characters in more than sixty films. Her favorite projects, Laura (1944), A Tree Grows in Brooklyn (1945), and Anna and the King of Siam (1946), also became American cinematic classics. Designing for the lavish productions that typified Hollywood's golden age, she was expected to make innovative use of the day's finest materials to create historical, fantasy, and contemporary wardrobes. She used the resources at the Fox studios to experiment with designs for "real" clothing that she wore and made in custom versions for her leading ladies' offscreen wardrobes.

Cashin returned to New York, and to Adler and Adler, in 1949. She received the unprecedented honor of earning both the Neiman Marcus Award and the Coty Fashion Critic's Award within the same year (1950). Displeased, however, with her manufacturer's control over her creativity, she decided to challenge the setup of the fashion industry. Working with multiple manufacturers, she designed a range of clothing at different price points, thereby specializing in complete wardrobes for "my kind of a girl for a certain kind of living."

In 1953 Cashin teamed with the leather importer and craftsman Philip Sills and initiated the use of leather for high fashion. She made her name through her unconventional choices in materials as well as her inexhaustible variations on her favorite theme of adapting the flat, graphic patterns of Asian and South American clothing to contemporary global living. Through her work for Sills and Company, she is credited with introducing "layering" into the fashion lexicon. In turn, she credited the Chinese tradition of dressing for, and interpreting the weather as, a "one-shirt day" or a "seven-shirt day." Her layered garments snugly nestled within one another and were easily converted to suit different temperatures and activities by donning or removing a layer. Cashin's objective was to create a flexible wardrobe for her own globe-trotting lifestyle, wherein seasonal changes were only a plane trip away. Frustrated by the categorization of sportswear designer, she declared that travel was her "favorite sport."

Coach and the Cashin Look 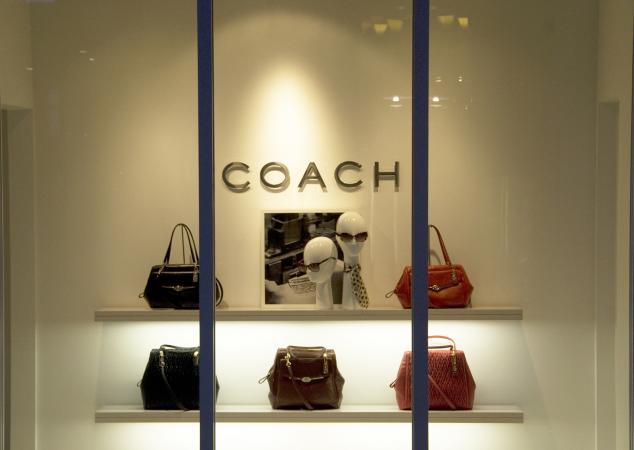 In 1962 Cashin became the first designer of Coach handbags and initiated the use of hardware on clothing and accessories, including the brass toggle that became Coach's hallmark. She revolutionized the handbag industry. Unlike contemporary rigid, hand-held bags, her vividly colored "Cashin-Carries" for Coach packed flat and had wide straps, attached coin purses, industrial zippers, and the famous sturdy brass toggles, the last inspired by the hardware used to secure the top on her convertible sports car.

Without licensing her name, Cashin designed cashmere separates, gloves, canvas totes, at-home gowns and robes, raincoats, umbrellas, and furs. She also ran the Knittery, a consortium of British mills that produced oneof-a-kind sweaters knit to shape, rather than cut and sewn. Among many other industry awards, she received the Coty award five times and entered their hall of fame in 1972; in 2001 was honored with a plaque on the Fashion Walk of Fame on Seventh Avenue in New York City.

Cashin worked until 1985, when she decided to focus on painting and philanthropy. Among several scholarships and educational programs, she established the James Michelin Lecture Series at the California Institute of Technology. Cashin died in New York on 3 February 2000 from complications during heart surgery. In 2003 the Bonnie Cashin Collection, consisting of her entire design archive and endowments for design-related lecture series and symposia, was donated to the Department of Special Collections within the Charles E. Young Research Library at the University of California, Los Angeles.