Charles Wilson Brega James was born 18 July 1906, in Camberley, Surrey, England. He was described by a friend, Sir Francis Rose, as temperamental, artistic, and blessed even in childhood with the ability to escape the mundane chores of life like a trapeze artist. His mother's family was socially prominent in Chicago and his father was a British military officer, so young Charles experienced an international upbringing. He was educated at Harrow, a British public school, where he met the fellow fashion enthusiast and fashion photographer Cecil Beaton, whose images later defined James's work.

While still in his teens James initiated his design career in Chicago, where friends of his mother supported him. He began by making patterned scarves that he modeled and sold from his office desk at the architectural division of a utilities company, where he was employed. When he was fired from his job, he turned to millinery. He sculpted hats directly on the heads of clients in the shop he had named after a school friend, Charles Boucheron. In 1928 James left Chicago in a swirl of financial confusion and relocated in New York City. He was there long enough for Diana Vreeland to observe and comment on his hats, to have his hats merchandised through a prominent department store of the time, and to begin designing dresses before heading to London in 1929. For the next ten years he divided his time between London and Paris, with brief promotional journeys to Chicago and New York. During this period he opened his first salon in London, located in Mayfair, but he quickly declared bankruptcy. In 1933 he reopened the business.

James, who was never afraid to try new materials, spiraled a zipper around the torso in 1929, thus designing his famous taxi dress. The taxi dress and several other of his designs were licensed in the early 1930s so that manufacturers in both England and the United States could copy them. Marketed in famous department stores of the day-most notably Best and Company, Marshall Field's, and Fortnum and Mason-these garments gave his designs, if not his name, wide visibility. Friends of James's mother on both sides of the Atlantic were counted among his most enthusiastic clients for his increasing output of couture garments, at least until her death in 1944. Additionally, his designs intrigued actresses such as Gertrude Lawrence and women with artistic leanings such as Anne, countess of Rosse, and Marit Guinness Aschan. By this time, however, the twin nemeses of James's career were obvious: his desire to receive outsized financial rewards for his designs, coupled with perfectionism and his insistence on total control, eventually destroyed him.

The late 1930s were a period of great and lasting creativity for James. He produced the Corselette or L'Sylphide evening dress (1937); the two-pattern piece halter gown (1937); La Sirène evening dress with a pleated front panel (1938); a raised, pouf-fronted gown (1939); and the Figure-8 wrapped skirt (1939). In 1937 James held his first showing in Paris; included among the garments were striking wraps made of old silk ribbons from the firm of Colcombet. For the remainder of his design career, James produced variants of the ribbon gowns he first fashioned for this Paris show. The gowns were initially in two pieces, bodice and skirt, with the winglike skirt featuring tapering tips of ribbon ending in infinity at the waistline; later examples featured one-piece skirts constructed of cut fabric terminating in a much less graceful manner. Indeed, James continually reused many of the designs that he first created in the 1930s. For example, the garment made for Austine Hearst that James himself identified as his thesis in dressmaking, the 1953 Clover Leaf or Abstract gown, actually evolved from a trilobed, skirted gown created in 1938 and a cloverleaf crown hat designed in 1948. Excluding mass-produced designs of the 1930s, for which no records are known to exist, James created just over one thousand designs during his career. Only a few of James's designs are titled; those that generally identify a unique cut rather than a single garment.

Because of various financial escapades that skirted the limits of legality, James found himself in 1939 no longer welcome in England. The next year he opened Charles James, Incorporated, at 64 East Fifty-seventh Street, New York City. Virtually ignoring wartime rationing, he began designing collections for Elizabeth Arden and redesigning her couture collection in 1944; their relationship was severed in 1945 because of financial overruns. However, the Arden-James partnership spawned a Cecil Beaton drawing of several of James's greatest designs, including a variant of the Sirène gown, which is associated with the collaboration.

Following his year-long stint at Arden, James established himself at 699 Madison Avenue, the address where he remained longer than any other in his career. One observer quipped that it was James's perpetual house of torture, not couture. The majority of extant James couture creations came from the Madison Avenue workrooms. James did not let go of his creations easily. He made his clients pay, sometimes twice for the same gown, and sometimes for a garment he had also promised another client. He was notorious for not having garments delivered on time. He was known to cut completed garments off of clients because he was unhappy with either the product or the client. Despite his volatile and often outrageous behavior, his clients acknowledged his genius for cut and color, and many of them supported him financially until the end of his career. 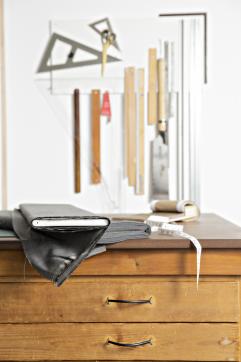 James was obsessed with understanding exactly how clothes worked on the body. He spent thousands of dollars in 1950 and 1951 trying to understand how a sleeve worked. The result was an arced sleeve that drew an editorial observation that James's interest in a sleeve was equivalent to an engineer's interest in a bridge. The writer had it right, for James worked not only with tools associated with dressmaking but also construction tools like calipers, a compass, and a plumb line, among others. During his later years James tried teaching his theories, which related to the proportion of the female figure and how it intersected with apparel construction. In the end, some of his clients found his clothes a joy to wear, while others were tortured. One even bought two opera seat tickets, one for the skirt of her "Butterfly" gown, the other for its sweeping, layered tulle back panel.

So sure was James of the cut of his garments that only rarely does one find him using either patterned fabrics or surface embellishment. Indeed, one of the joys of looking at a James creation is following the flow of seams, seams that seem to go in previously unexplored directions. He made this indulgence easy by selecting contrasting fabrics, such as silk jersey, satin, and taffeta or velvet, organdy, and satin to meld in skirts of black, garnet, and tobacco brown or rose red, white, and ruby. He enjoyed blending cool celadon and celery greens, as well as contrasting warm moss and cool bottle greens. When combinations of purple, pink, and green were all the rage in the mid-1940s, James never blended such colors; rather, he would meld dusty rose and pale gold; mustard and maroon; and oranges and blacks in different materials. On a garment's surface he treated the two sides of the fabric equally, playing the color and texture of the one against the other.

For roughly a decade, from 1947 to 1954, James achieved success and recognition. His garments were acquired by many of the fabled socialites of the period, including Mrs. William (Babe) Paley, Mrs. William Randolph (Austine) Hearst Jr., Mrs. Harrison (Mona) Williams, Mrs. Cornelius Vanderbilt Whitney, Mme. Arturo Lopez-Willshaw; by fabled theatrical personalities such as Gypsy Rose Lee and Lily Pons; and by notable collectors of art such as Dominique de Menil. But the most important client of his career was Millicent Huddleston Rogers, a Standard Oil heiress. In her he found a perfect figure to dress, a client with whom he could discuss art and design. Moreover, she was able to pay his inflated prices. She arranged an exhibition of James's work at the Brooklyn Museum in 1948; the show featured the garments he had made for her during the previous ten years. These formed the nucleus of the unequaled collection of Charles James material at this institution, which includes not just garments but half and full toiles and card patterns. Of all James's clients, Rogers is the only one with whom he is known to have codesigned a garment, an eighteenth-century inspired, open-robe gown. 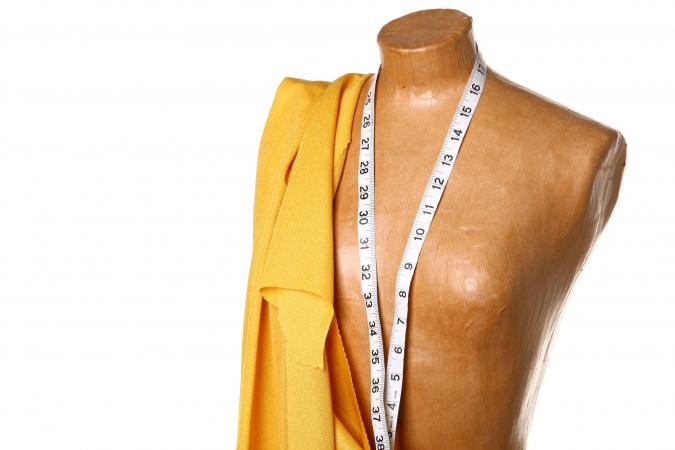 Even while the manager Kate Peil was keeping his dress salon on an even keel, James was becoming restless and demanding more recognition of his talents as well as increased financial reward. To this end he rapidly entered into contractual arrangements with a variety of manufacturers. In 1951 he began by working with the Cavanaugh Form Company, a mannequin manufacturer, to produce his uniquely proportioned, papier-mâché dress form that he called Jenny. In 1952 he began designing collections of dresses and separates for Seventh Avenue's Samuel Winston and suits and coats for William Popper that were retailed by Lord and Taylor. In 1953 James designed furs for Gunther Jaeckel and belts for Bruno Belt based on his "floating line" principle-that is, the waist is not a true oval but has depth as well as dimension. In 1954 he added a line of jewelry to be manufactured by Albert Weiss and agreed to design for another Seventh Avenue concern, Dressmaker Casuals. By the time this last contract was signed, however, previously signed agreements were unraveling due to James's inability to deliver designs on time and his convoluted business practices. Two Coty awards in 1950 and 1954 for "great mystery of color and artistry of draping" and "giving new life to an industry through his sculpturesque ready-to-wear coats designed for Dressmaker Casuals" did nothing for the ensuing courtroom battles that effectively ended the most productive and potentially profitable period in James's career.

He tried in 1956 to design a line of Borgana synthetic fur coats with Albrecht Furs as well as a coat for off-the-rack distribution by E. J. Korvette. Most astonishingly, he designed a line of infant wear to be manufactured by Alexis Corporation of Atlanta. James married Nancy Lee Gregory in 1954 and soon had a young family. His success with the baby garments surely lay in the fact that once again he had at his disposal a live model on which to experiment, his son, Charles Junior. As with so many other early designs that evolved over the years, James transformed some of the baby clothes into adult attire.

By 1958 James was a beaten man, unwelcome on Seventh Avenue, and mentally, physically, and financially drained. His marriage ended in 1961, and in 1964 he moved into New York's bohemian hotel, the Chelsea. Here he worked with the illustrator Antonio to document his career. Old clients joined with his protégé Halston in 1969 in a bravely attempted salute to his career. James attempted to document the creations of a lifetime, whether they were in public or private holdings. He accomplished some design work with Elsa Peretti and Elizabeth de Cuevas. Above all, during those final years of his life, Charles James was fanatical about securing his proper place in the history of twentieth-century fashion.

His fellow fashion designers, potentially his most severe critics, left no question regarding their assessment of his talent. Poiret passed his mantle to James, and Schiaparelli and Chanel dressed in his clothes. Dior praised him for being the inspiration for the New Look, and Balenciaga saw James as the greatest and best American couturier; moreover, he believed that James was the only couturier who had raised dressmaking from an applied to a pure art form.