Domenico Dolce was born in Polizzi Generosa (near Palermo, Sicily) on 13 September 1958. His family owned a small clothing business, where Domenico worked from childhood. Stefano Gabbana was born in Milan on 14 November 1962. He studied graphics but soon turned to fashion. After a brief period working as assistant designers, they founded the Dolce & Gabbana label, which had its first runway show as part of the New Talent group in Milan in 1985, upon the invitation of Italian fashion promoter Beppe Modenese.

In 1986 they produced their first collection, called "Real Women." In 1987 they launched their knitwear line and in 1989 their beachwear and lingerie lines. Beginning in 1988 they produced their ready-to-wear line in Domenico Dolce's family-owned atelier, located in Legnano, Milan. The first Dolce & Gabbana men's collection appeared in 1990. In 1994 they launched the D&G label, inspired by street style and a more youthful look. The clothes were produced and distributed by Ittierre.

The company launched several fragrances, including Dolce & Gabbana Perfume, By Dolce & Gabbana, and Dolce & Gabbana Men. One of their perfume ads was directed by the Italian film director Giuseppe Tornatore, with whom Dolce and Gabbana developed a close relationship, going on to act in his 1996 film The Star Maker. They introduced a line of eyewear under the Dolce & Gabbana and D&G labels and produced music CDs.

In 1996, for their tenth anniversary, they published Ten Years of Dolce & Gabbana, which included their most important advertising images and texts. In 1999 D&G Junior was created, their collection for children, which was presented at the children's fashion show Pitti Bimbo in Florence.

In 2003 their newest store, covering three floors, opened in Corso Venezia in Milan, in the former home of Brigatti, perhaps Milan's best-known luxury sportswear store. The store is designed in the round from a central piazza and includes a bar, a traditional barber-shop, and an ultramodern spa. The individual stores are illuminated by lamps of Venini glass, made according to designs by Domenico Dolce.

In a 1995 interview Dolce and Gabbana recalled their first professional foray into fashion during the Milan collections as eliciting "one of the strongest emotions we have ever experienced" (Gastel, p. 238). The show marked the occasion of the birth of the Dolce & Gabbana label, which was destined to play a fundamental role in the history of Italian ready-to-wear. The designers showed full-length garments of stretch jersey, silk jackets, and oversize shirts that could be worn with casual sandals. The collection, characterized by fluidity and difference, soon found an enthusiastic public.

The Dolce and Gabbana Style 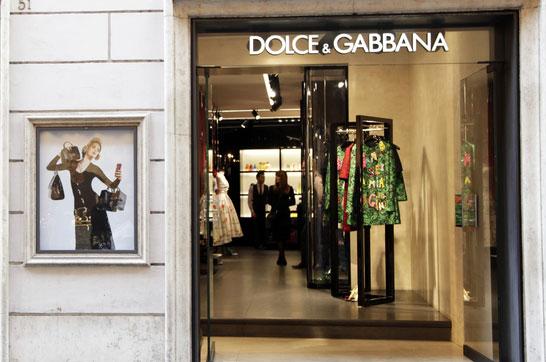 Dolce and Gabbana are considered the inventors of a Mediterranean style that draws its inspiration from the Sicily of Luchino Visconti's 1963 film The Leopard and the women of Italian realism, sensual and austere like Anna Magnani, to whom they dedicated a collection whose key element was the 1940s slip. At the beginning of their career, the designers also turned to Sophia Loren, Claudia Cardinale, and Stefania Sandrelli for inspiration. The Dolce & Gabbana woman is unbiased and brazen, but fearful of God and devoted to church and family, an attitude typical of southern Italian Catholicism. A woman who simultaneously reveals and conceals brassieres and corsets, lace, lingerie, and veils, and who is disturbing in her impetuous sensuality-a provocative woman proud of her body. The designers' models are soft, round, and full-figured. "Dark girls with dark eyes evoke the women of the south-carnal, provocative, yet austere and proud at the same time" (Sozzani, p. 5). At a time when fashion saw women as executives in two-piece suits with padded shoulders, Dolce & Gabbana's first collection included tulle and angora, twin sets in jersey lace, and soft, wide, extravagant skirts. Their favorite materials were crocheted lace, wool, and silk.

They were not looking for a retro look; however, Dolce & Gabbana turned to the past for innovation. The designers remarked, "We want to use the past to project it into the future" (Sozzani, p. 11). And making it modern involved the creative use of fabrics and colors, and the ability to blend various sources of inspiration, primarily those whose origins could be traced to the heterogeneous world of the Mediterranean.

The elements of Italian culture are reinforced through their meticulous attention to their image, and their publicity campaigns have always been handled by the world's finest photographers. Every shot is organized as if it were a film set. Their first campaign was photographed by their friend, the Sicilian photographer Ferdinando Scianna, who, with Dolce and Gabbana, was just getting started in fashion. Besides Scianna, other photographers who have worked with the label include Fabrizio Ferri, Steven Meisel-famous for his pictures of the Italian film star Monica Bellucci and the supermodel Linda Evangelista-Peter Lindbergh, and Helmut Newton.

The journalist Nicoletta Gasperini of Donna, the Italian fashion weekly that gave them their first cover- the model Marpessa photographed by Giovanni Gastel- helped define their image. "We convey to them how we feel and they give us back a mediated image of culture" (Gastel, p. 241).

The turning point in their international success began with their friendship with Madonna. The pop star ordered from their New York showroom a guêpière (corset) made of gemstones and a jacket to wear at Cannes to launch her film Truth or Dare: In Bed with Madonna by Alek Keshishian (1990). Madonna's participation in the 1992 D&G party and runway show publicized their friendship. Shortly after, the singer asked them to design the fifteen hundred costumes for her 1993 "Girlie Show" tour.

Dolce & Gabbana's Mediterranean style is not a rigid framework but the template of an imaginary world through which they draw inspiration. The collection changes for every season, ranging from the baroque to the plastic, from aristocratic to working class, brazen to bourgeois, from animal prints to a cardinal's cloak. In 1994, for example, after producing corsets, girdles, T-shirts, and styles emphasizing breasts and revealing cleavage, Dolce & Gabbana introduced a "Sapphic chic" masculine style for women characterized by short hair slicked down with brilliantine, which was exemplified by one of their earliest fans, Isabella Rossellini. In 2003 for their Milan men's show, they took their inspiration from contemporary soccer stars. The darlings of the Italian and international press, according to Suzy Menkes, a journalist for the International Herald Tribune, the two designers have the ability of being able to mix periods and countries, masculine and feminine looks, fabrics and styles.

Dolce & Gabbana is one of the best examples of the explosion in Italian ready-to-wear that occurred during the mid-1980s. Creativity and versatility, the union of the press and the star system, a range of products and clothing lines, and careful attention to distribution are all elements that contribute to the realization of an integrated system of communication.