Franco Moschino was born in Abbiategrasso, Italy, in 1950. He attended art classes at the Academia di Belle Arti di Brera in Milan until 1969. Although he expected to be a painter, he pursued opportunities as a fashion illustrator for a variety of periodicals. He was a keen observer of the current art phenomena, from avant-garde to contemporary styles. Until 1983, Moschino collaborated with other manufacturers as a creative consultant with Aspesi, Blumarine, and Cassoli. Rather than inventing new styling, he combined existing elements in unexpected ways. His expertly tailored and classic styles, punctuated with whimsical detailing, were already apparent at the inception of his company, Moschino S.n.c., which became Moon Shadow S.r.l. in 1983. In 2000, the company was again renamed as Moschino S.p.A.

Moschino, a fashion show produced by the highly regarded Aeffe SpA, attracted media attention for the designer's persistence in appropriating garments as sign boards of irreverence and irony. In 1989, Moschino's signature line, Couture, was introduced during the "XX Olympics of Fashion." His second line, labeled Cheap and Chic, was introduced in 1988. During that unforgettable runway presentation, safety pins adorned evening clothes and garbage bags replaced woven fabric, reflecting surrealism and dadaism. Moschino previewed his Uomo menswear in 1986 and followed it with his Diffusion line in 1999. Superbly cut styling for Jeans Uomo arrived in 1996.

The introduction of each of Moschino's lines featured accessories, fragrances, swimwear, eyewear, men's and women's clothing, and most notably jeans. Designs were provocatively and playfully posed in artistic vitrines, store interiors, showrooms, and even a corporate office. Vignettes are still represented as formidable instruments of communication for Moschino's acerbic wit, passions, and politics.

Theatrically dressed troubadours and character actors heralded the opening of Moschino's first boutique in Milan, in 1989. At the opening of the Cheap and Chic store, canvases painted by Moschino transformed the retail space into a fine art gallery, Una Galleria d'Arte Finta. By 1991 he had opened boutiques in Rome, Los Angeles, and New York City. The displays that launched his New York store and his Milan store, with its controversial windows, in 1992 brilliantly expressed his opinions on environmental issues, drug addiction, racism, animal causes, and violence. Stores in Bangkok and Osaka opened in 1997.

In 1999, skilled designers and artisans revisited Moschino's iconographic themes; using unorthodox methods, they updated the decor of the original showroom and the retail store. Aware of the company's historic sense of humor and irreverent approach to design, designers enlarged and renovated the Milan office space-including the corporate office, showroom, and design studios-and installed amusing sculpture and artistic, structural detailing.

Since Moschino's death in 1994, due to complications from AIDS, the company's creative force, Rossella Jardini, has preserved the Moschino traditions and message in the global market, with an emphasis on trade. In 1999, ownership of the company was transferred to the manufacturer Aeffe SpA. 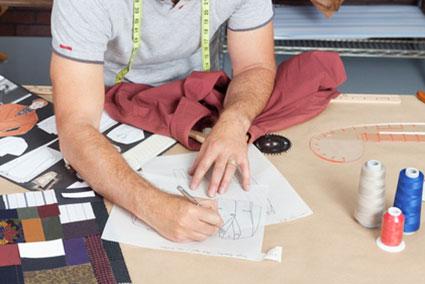 Moschino called himself half tailor, half artist; although he did not cut or sew, he drew frequently, quickly, and spontaneously. His cuts were meticulously constructed and traditional, as well as sexy and flattering to the wearer. Yet he claimed he was in conflict with the system that produced fashion because it shamefully disregarded modern society. Moschino chose a life surrounded by mere essentials, while he provided financial support to his favorite charities, including drug rehabilitation programs and a pediatric hospice for children suffering with HIV/AIDS. In 1995, Fondazione Moschino established an organization called Smile, which offers assistance to children in developing countries.

Zany theatrics have always distinguished Moschino's memorable fashion presentations, events, performances, and happenings. He produced wildly imaginative seasonal presentations, radically changing how fashion shows are conceived. The designer once bounded on stage to interrupt a runway show, exclaiming that fashion was over, although a videotape of the show kept running, all to the bemusement of journalists and buyers. On another occasion, he displayed garments on easels and orchestrated a party inspired by the atmosphere of an open-air market. Once, he paraded models on their hands and knees down the runway, all featuring his unconventional ideals of beauty, such as a crooked nose or frizzy hair. Many Moschino models have assumed the roles of clowns, madonnas, nuns, and fairies in his unusual shows.

In 1985, a sampling of his defining silhouettes was the subject of Italia: the Genius of Fashion exhibit at the Fashion Institute of Technology in New York. Moschino's impassioned messages appeared printed, embroidered, and otherwise stitched on garments. The strategy behind his activism can also be regarded as an ingenious ploy to motivate the customer to buy. Advertising campaigns throughout the 1990s proclaimed "Stop the Fashion System," while the clothes were brazenly printed or otherwise appliquéd with hilarious slogans and resonant symbols, including peace signs, hearts, spaghetti stains, and bar codes. Moschino's clothing has always reflected a sense of humor together with a strong sense of social justice through words and iconic patterns such as mortar and bricks, exotic opera characters, or cowboy stereotypes. In his Ecouture line he labeled fake fur as ecological and promoted "friendly garments," colored with natural dyes, since he was concerned that dress was becoming detached from humanity and nature.

Throughout the 1990s, Moschino used an abundance of props to make statements and visual puns. In his store windows he displayed mannequins in straight jackets bearing the stenciled text "For Fashion Victims Only." He posed a regal figure regally, wearing a crown fashioned from dried macaroni, illustrating his distrust for authority. Another window featured models posed among open, suspended scissors, making scraps of glamorous materials. Once he embellished a gown with the silhouette of a duck bubbling a balloon message from its beak, "I love Fashion," and through fishnet-draped windows, Venus on a Half/Shell revealed a white bathing suit stenciled with the words "Save Our Sea." A retrospective exhibition, titled XX Years of Kaos, at the Museo della Permanente, exhibited the enterprising history of Moschino. The pages of the 1993 publication, including a video, opened with an acerbic quote describing the designer's "ten years of stupidity, fantasy and me."

The city of Milan paid tribute to the designer through an exhibition titled Moschino Forever in 1995. Universally recognized trademark symbols, including a cow, a heart, the peace sign, and a happy face, were placed all over the city. In 1996, the New Persona, New Universe exhibition featured a larger-than-life, heart-shaped labyrinth created for the occasion by the design studio within Moschino's company. This exhibition formed part of the Biennale di Firenze, a celebration that combined art and dress for the first time in the galleries, museums, and alternative spaces of the city of Florence, Italy. A selection of Moschino designs was included in the 1998 Fashion and Surrealism exhibition by Richard Martin, guest curator, at the Victoria and Albert Museum in London.

Throughout his life Moschino exhibited a remarkable ability to laugh at himself. He delighted in appropriating universal symbols, playing with them as elements of dress design, and simply having fun with fashion. He claimed fashion did not exist, and if it did, its true significance would embody the freedom to wear anything.