Geoffrey Beene was born Samuel Albert Bozeman Jr. in Haynesville, Louisiana, on 30 August 1927, into a family of doctors. He dutifully enrolled in the premed program at Tulane University in New Orleans in 1943. Three years later he dropped out of Tulane and enrolled in the University of Southern California, Los Angeles, to pursue his lifelong interest in fashion design. However, he never attended classes as he decided to accept a job working in the display department of the I. Magnin department store, and then moved to New York to study at the Traphagen School of Fashion. By 1948 Beene had moved to Paris, where he attended the École de la Syndicale d'Haute Couture, the traditional training ground for European fashion designers. He then served a two-year apprenticeship with a tailor from the couture house of Molyneux. Beene returned to New York in 1951 and worked for a series of Seventh Avenue fashion houses before being hired by Teal Traina in 1954. He remained at Teal Traina until 1963, when he decided it was time to strike out on his own, opening Geoffrey Beene, Inc., offering high-quality ready-to-wear women's clothing. Beene's business partner was Leo Orlandi, who had been the production manager for Teal Traina. 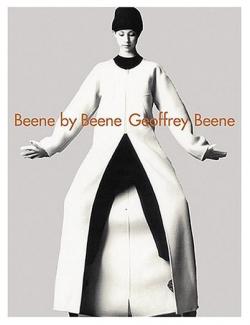 Beene started his career during the era when Parisian designers still dominated the fashion world and Americans were expected to look to them for inspiration. However, though Beene was trained in the traditional manner, educated in New York and Paris, he broke out of the mold after his training and apprenticeship working for other designers. His creativity and skill were soon rewarded with a Coty award in 1964, after just one year in business, thus beginning one of the most award-winning careers in American fashion. His first collection made the cover of Vogue, and he has been regarded as a dean of American design ever since. His high-profile clients have included several First Ladies, and he designed the wedding dress of President Lyndon B. Johnson's daughter, Lynda Bird Johnson, in 1967.

Beene's distinctive creative vision manifested itself fully in 1966 when he designed ballgowns using gray flannel and wool jersey. He went on to design a series of dresses inspired by athletic jerseys, most notably a sequined full-length football-jersey gown in 1968. Generally, his clothes did display a respect for traditional dress-making, which manifested itself in details such as delicate collars and cuffs, and minutely tucked blouses, applied to a paired-down silhouette.

By the mid-1970s Beene had a number of licensing agreements for products as diverse as eyeglasses and bed sheets. The Beene Bag line of women's wear, introduced in 1971, used the same silhouettes as his couture line, but he employed inexpensive fabrics such as mattress ticking and muslin. Everyday fabrics continued to make their way into his higher-priced line as they had since the late 1960s, as he used sweatshirt fabric and denim for evening dresses in his 1970 collection.

Beene considers the years 1972-1973 as a turning point in his career. It was then that he set aside traditional Parisian tailoring methods and began to explore softer silhouettes. He commented on these years in the catalog to a 1988 retrospective of his work at the National Academy of Design:

"At that time there was so much construction in my clothes they could stand alone. I believed inner structure and weight were synonymous with form and shape. My sketches were dictating the design, not the fabric. When I became aware that my clothes lacked modernity, I began to experiment more with fabric, working with textile mills abroad, commissioning new weights, textures and fiber mixes. (Beene 1988, p. 4) "

By 1975 Beene had been awarded a fifth Coty and had launched Grey Flannel, one of the first and perennially most successful designer men's fragrances. He was able to buy out his partner and obtain complete control over his business by the early 1980s.

In 1976 Beene became the first American designer to show in Milan, Italy, set up manufacturing facilities there, and successfully compete in the European fashion market. This success led to his sixth Coty in 1977, which was awarded for giving impetus to American fashion abroad. It is the Coty award that he treasured most, as the challenge of success in Europe was significant to his development as an artist-he proved to himself that his designs and his unique American vision had validity in the international arena. The European success also brought the added benefit of prestige and significantly increased sales of the couture line in the United States. But by this point in his career, Geoffrey Beene Couture, Beene Bag, and two fragrances accounted for only one-third of Beene's sales; the remainder was from licensing royalties for Beene-designed men's clothes, sheets, furs, jewelry, and eyeglasses.

While Beene has always been regarded as a master of form silhouette, it has been his use of color and fabric mixtures that garner the most comment. In a 1977 article for The New Yorker, Kennedy Fraser stated: "The distinctive quality of Geoffrey Beene's work which at the same time reflects an immediate sensuous response to the color and texture of beautiful fabrics must be characterized as a variety of intellectualism" (Fraser, p. 181). His ability to push experiments with color and texture was remarked upon again by the Cleveland Plain Dealer in 1987: "In the hands of a less adept designer, a collection that encompasses everything from bedspread chenille and gold spattered faille or silver leather to monk's cloth would be a nightmare" (Cullerton, p. 181). Beene consistently revealed hidden characteristics of the fabrics that he chooses.

In 1982 Geoffrey Beene received his eighth Coty award-the most awarded to any one designer as of the early 2000s-and professional recognition continued through the 1980s as he was named Designer of the Year in 1986 by the Council of Fashion Designers of America.

The vocabulary of sportswear appeared consistently in Beene's work as he strove for a balance between comfort and style. During the 1980s, when jumpsuits began to appear frequently in his women's collection, he stated that "the jumpsuit is the ballgown of the next century." Neither hard-edged nor futuristic, Beene's jumpsuits emphasize the comfort and versatility of this form of garment. The same is true for his use of men's wear influences in women's wear-bow ties, vests, and suiting fabrics are used with whimsy.

In 1988 a retrospective at the National Academy of Design opened to coincide with the anniversary of Beene's twenty-five years in business. During this time, an article appeared in the Village Voice by Amy Fine Collins, who took on the role of Beene's muse through the 1990s. In analyzing Beene's work as an artist, she focused on his seemingly contradictory combinations of materials and influences, praising his courage to "regularly descend into the depths of taste in order to reemerge with his vision replenished" (Fine Collins, p. 34). In 1988 the Council of Fashion Designers of America gave Beene a newly created award, the Special Award for Fashion as Art.

Beene continued his innovations with fabric, treating humble textiles regally and using luxurious materials with throwaway ease. For example, a 1989 sheared mink coat for the furrier Goldin-Feldman in a bathrobe-like silhouette was created in fur dyed hot pink, edged with electric blue ribbon in a giant rickrack pattern, and lined with an abstract print in coordinating colors.

The year 1989 saw the opening of Geoffrey Beene on the Plaza, Beene's flagship retail shop on Fifth Avenue. He envisioned the shop as a design laboratory where he could "put in something new and in a few days have enough feedback to know if it's a success or if it has to go back to the drawing board" (Morris, p. B11).

Beene had shown a special interest in lace, for its combination of sheerness and strength along with its ability to stretch. In the late 1980s he began utilizing strategically placed sheer and cutout panels, especially in his evening clothes, culminating in the matte-wool-jerseyand-sequins lace-insertion gowns of 1991, which exemplify the exacting cut and technical intricacy of his work. His spiraling designs, which consider the body in the round rather than using flat pieces and treating the front and back as separate entities, reveal his admiration for and study of the work of the French couturier Madeleine Vionnet.

In 1994 Beene was honored again with an exhibition at the Fashion Institute of Technology to celebrate thirty years in business and was awarded the first-ever Award of Excellence by the Costume Council of the Los Angeles County Museum of Art. In 1997 and 1998 exhibitions of his work were featured at the Toledo Museum of Art, the Philadelphia Museum of Art, and the Rhode Island School of Design Museum.

Beene's clothes have consistently been praised for their individuality and wearability. In a 1994 interview with Grace Mirabella he explained his philosophy of design:

"The biggest change in fashion and the world has probably come in the past and present decade-the collapse of rules and their rigidity. This had to happen. There were too many illogical rules. I have never wished to impose or dictate with design. Its meaning for me is to affect people's lives with a certain joy, and not to impose questions of right and wrong. (Mirabella, p. 7) "

Beene's lifetime achievement awards include the Smithsonian's Cooper-Hewitt National Design Museum's American Original award, presented in 2002. In 2003 he became the first recipient of the Gold Medal of Honor for Lifetime Achievement in Fashion from the National Arts Club. He received a career excellence award from the Rhode Island School of Design, which awarded him an honorary doctorate in 1992.

Beene weathered a famous seventeen-year feud with Women's Wear Daily, during which the publication refused to mention his name. By early 2002, Geoffrey Beene pulled his couture line out of retail stores; he continued to produce clothing for a select group of private clients.