Gianni Versace (1946-1997) was a defining figure in the world of design in the 1980s and 1990s. He dressed the independent spirits, celebrities, and the rich, young, and fearless. His exclusive clique personified his ideals of men's and women's ready-to-wear and couture clothing. He also created accessories, linens, and a collection for the home inspired by his preference for the baroque style. Versace's knowledge was encyclopedic and his sense of history prophetic; his genius was the successful linkage of fashion and culture.

Following Versace's tragic death in July 1997, his sister Donatella was catapulted into the international limelight. Only three months later, no longer her brother's muse and collaborator, she assumed creative direction over the development of a dozen highly demanding collections. An earlier agreement between brother and sister had established that she would be the one to carry on his work if it were ever necessary. As a result the signature Versace Atelier collection was presented as usual in Paris in 1998.

Donatella Versace was born in Reggio Calabria, in southern Italy in 1955. She was one of four children born to a businessman and an accomplished seamstress. During Donatella's childhood, Gianni designed clothing for his younger sister, who became the embodiment of his standards. After she completed her studies in Italian literature at the Università di Firenze to supplement her sense of culture, she followed Gianni to Milan, where he had established his career. Initially he sketched his first ready-to-wear collections for the manufacturing firms of Genny, Complice, and Callaghan.

Donatella arrived with the intention of shaping her brother's public image through deft management of his public relations. When he established his signature company in 1978, she became his spirited muse-in-residence. Santo Versace, an older sibling, assisted in the organization of the business, which he continues to direct.

As the house's driving creative force since 1997, Donatella has forged on to energize her international team of fashion designers. Her entrance-making gowns, as well as practical, elegant ready-to-wear clothes and men's wear maintained a high profile in her design studios and corporate offices in the center of Milan. The Versace family estates are located in nearby Como, within an hour's drive from the Milan corporate headquarters.

Donatella's larger-than-life approach to creating fashion mirrored her brother's maxim that fashion must fuse with the media, the performing arts, celebrity, vitality, and sexuality. Donatella staged the audacious, high-powered Versace runway shows after Gianni's death, enlisting the friendship and devotion of many of the supermodels. Her brother had initiated successful advertising campaigns with photographers and artists beginning in the late 1970s: Richard Avedon and Andy Warhol, among others, shared his flamboyant taste for self-promotion. Donatella continued in this vein, preferring to work with such photographers as Steven Meisel and Bruce Weber. The company continued to unleash dynamic, sexually charged media campaigns in the early 2000s as it expanded its share of the luxury trades.

Gianni Versace's penchant for extreme styling and unconventional choices of sumptuous and radiant fabrics combined themes from his studies in art history with new technology. The Versace label was more focused on the modern career woman in the early twenty-first century, a change reflected in the variety of garments it produced. Donatella's hallmarks included flashy materials fluidly draped. She presented herself on the international stage as the model of an invincible woman. Donatella also launched the fragrance Versace Woman in 2001. 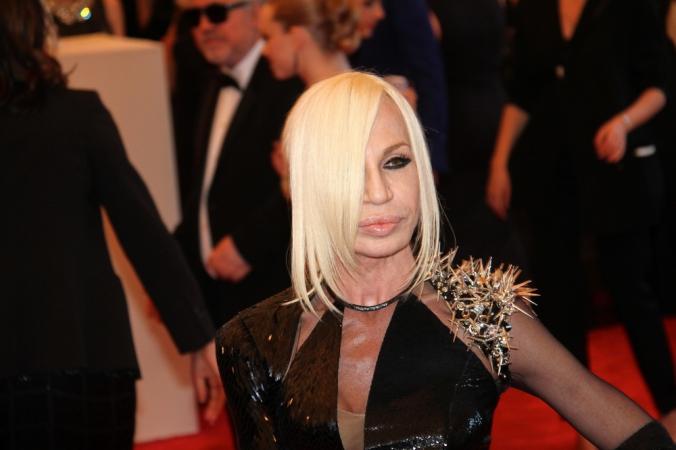 During their adolescence and early adult years, brother and sister remained loyal to each other. Gianni created vibrant garments for Donatella that embodied his personal rationale of expression. The freedom to dare, to make personal choices, was one of the Versace duo's resonant manifestos. During their nineteen years of collaboration, Versace consulted his younger sibling in all important decisions. Her bravura and dedication made her an integral part of the company as it developed. In early 2000 she epitomized the liberation he sought as a designer. Gianni paid tribute to Donatella when he named his 1995 perfume Blonde to honor her trademark long, platinum locks. Surrounded by revelers, her frequent tours of nightspots provided her with access to the younger generation. In due course, Donatella became chief designer for Versace's Versus collection, where she further empowered her success with their dual vision of bold patterns and high glamour infused with sex appeal, designed for a younger clientele. While Donatella was independent in her thinking, she was also committed to her brother's enduring legacy. She continued to style flashy and extreme ready-to-wear clothing as well as a couture line, as she did during her apprenticeship with Gianni and in her position as an accessory designer and creator of a line of children's clothing in 1993.

Donatella's camaraderie with celebrities, including Elton John, Elizabeth Hurley, and Courtney Love, reflected her belief in the significance of uncompromising friendships. Madonna, Jon Bon Jovi, Sting, and Trudy Skyler were among her closest confidantes. Like her older brother, she combined music with the media and the spectacle of contemporary urban life. Donatella's designs affirmed sensuality, employing short skirts and plunging necklines as devices of freedom. "Fashion can be freedom or it can be a way to live with no freedom," she avowed in Interview.

Donatella married the former model Paul Beck, with whom she had two children-Allegra, her uncle's beneficiary, born in 1986, and Daniel, born in 1991.

Donatella Versace reveled in the attention she received in fashion and popular lifestyle magazines. She pursued visibility at all levels of society and was always ready to convey the glamorous extravagance that identified her company. Her fashion edicts remained consistent: "If I want to be blonde, I am not going to be a medium blonde. I am going to be totally blonde. If I am going to wear heels, they are not going to be two inches high. They are going to be much higher than that. It's the freedom of extremes that I love" (Interview). Her confident design ethic mirrored that of her late brother, who became a creative genius in high-end apparel and of bold gestures in the media.