Hussein Chalayan's fascination with architecture, spatial dynamics, urban identity, and aerodynamics is expressed in garments based on concepts, technological systems, historical dress, and theories of the body. His clothes are minimal in look but maximal in thought.

Chalayan was born in the Turkish community of Nicosia on the island of Cyprus in 1970. His parents separated when he was a child. At the age of eight, he joined his father, who had moved to the United Kingdom. Chalayan was sent to a private school in London when he was twelve, but returned to Cyprus to study for his A-level examinations. He went back to London and attended Central Saint Martin's College at the age of nineteen to study fashion. Chalayan rose to fashion fame soon after he received his B.A. degree from Central Saint Martin's in 1993. His graduating collection, titled The Tangent Flows, was the now infamous series of buried garments that were exhumed just before the show and presented with a text that explained the process.

The rituals of burial and resurrection gave the garments a dimension of reference to life, death, and urban decay in a process that transported the garments from the world of fashion to the kingdom of nature. Since then, Chalayan has collaborated with architects, artists, textile technologists and aerospace engineers; has won awards; and has been recognized as an artist in numerous museum presentations of his work.

The genius of Chalayan's work lies in his ability to explore visual and intellectual principles that chart the spectral orientations of urban societies through such tangibles as clothing, buildings, vehicles, and furniture and through such abstractions as beauty, philosophy and feeling. Chalayan's Aeroplane and Kite dresses (autumn- winter 1995) used the spatial relationship between the fabric and the body to reflect the relative meanings of speed and gravity. The dresses became dynamic interfaces between the human body and its surroundings; the Kite dress actually flew and was reunited with its wearer when it returned to earth.

In Chalayan's eyes, all garments are externalizations of the body in the same way that vehicles and buildings are proportioned to contain the human form. "Every-thing around us either relates to the body or to the environment," Chalayan explained. "I think of modular systems where clothes are like small parts of an interior, the interiors are part of architecture, which is then a part of an urban environment. I think of fluid space where they are all a part of each other, just in different scales and proportions" (Quinn, p. 120). These sentiments were amplified in the Echoform collection (autumn-winter 1999) in dresses that mimicked airplane interiors. Chalayan attached padded headrests to the shoulders of the garments, evoking thoughts on the role of clothing as a component of a larger spatial system. 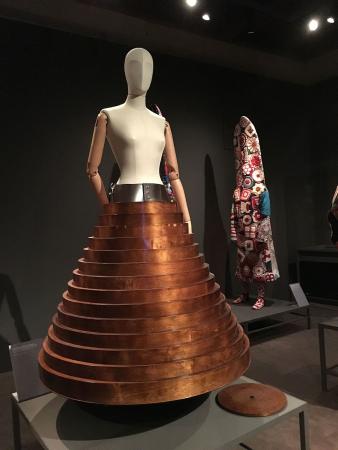 Likewise, the Geotrophics collection (spring-summer 1999) made chairs into wearable extensions of the human form. The chair dresses represented the idea of a nomadic existence facilitated by living within completely transportable environments. Determined to express "how the meaning of a nation evolves through conflict or natural boundaries," Chalayan explored the body's role as a locus for the construction of identity, highlighting the ways in which its appropriation by national regimes would orient and indoctrinate it according to the space in which it "belongs."

The relationship between space and identity was further explored in the groundbreaking After Words (autumn-winter 2000) collection. Chalayan based the collection on the necessity of evacuating one's home during wartime and having to hide possessions when a raid was impending. The theme evoked the 1974 Turkish military intervention that displaced both Turkish and Greek Cypriots from their homes and led indirectly to Chalayan's emigration to Britain several years later. The collection introduced the idea of urban camouflage through clothing, whereby fashion functions as a means of hiding objects in obvious places. After Words featured dresses-cum-chair covers that disguised their role as fashionable garments while simultaneously concealing the furniture beneath them. The collection included a table designed to be worn as a skirt, with chairs that were transformed into suitcases and carried away by the models.

For his before minus now collection (spring-summer 2000), Chalayan returned to the architectural theme expressed in Echoform and Geotrophics, designing a series of dresses in collaboration with an architectural firm. The dresses featured wire-frame architectural prints against static white backgrounds generated by a computer program designed to draw three-dimensional perspectives within an architectural landscape. The renderings' geo-metric dimensions suppress the depiction of real space and create a reality independent of the shapes and textures found in the organic world. Such absolute symmetry and concise angles create the illusion of a realm that is carefully ordered and controlled, yet the architectonic expressions correspond to physical registrations of surfaces and programmatic mappings.

The Remote Control Dress, which was commissioned in 2000 by Judith Clark Costume in London, was designed by means of the composite technology used by aircraft engineers, mirroring the systems that enable airplanes to fly by remote control. Crafted from a combination of fiberglass and resin, the dress was molded into two smooth and glossy pink-colored front and back panels fastened together by metal clips. The facade-like structure of the dress forms an exoskeleton around the body, arcing dramatically inward at the waist and out-ward in the hip region, echoing the silhouette produced by a corset. This structure gives the dress a well-defined hourglass shape that incorporates principles of corsetry into its design, emphasizing a conventionally feminine shape while creating a solid structure that simultaneously masks undesirable body proportions.

While Chalayan's work continues to question traditional readings of dress and to generate exciting interdisciplinary collaborations, he also opens new frontiers for other designers to explore. As many of his groundbreaking ideas begin to influence wider trends, Chalayan's work is gaining recognition in the mainstream fashion market while continuing to receive acclaim in fashion circles. Since Chalayan signed a licensing agreement with the Italian manufacturing company Gibo in 2002, his label has grown into a strong retail brand. The designer's appointment as creative director of fashion for the classically inclined British luxury retailer Asprey brings his conceptual oeuvre to a wider public. But the garments still require an audience with the confidence to carry off clothes heavy with the thought processes behind them.