Issey Miyake was born in Hiroshima, in the southern part of Japan, in 1938. In 1965 he graduated from Tama Art University in Tokyo, where he majored in graphic design. Following graduation, he went to Paris just three months after Kenzo Takada, the first Japanese designer to became successful in France, arrived there. Miyake and Kenzo had known each other in Tokyo, and they studied together at a tailoring and dressmaking school, l'Ecole de la chambre syndicale de la couture. In 1966 Miyake worked as an apprentice under the French couturier Guy Laroche, and two years later he apprenticed at Givenchy.

He then went to New York to work with the American designer Geoffrey Beene before returning to Tokyo, where he founded the Miyake Design Studio in 1970. One of Miyake's New York friends took some of his design samples to Vogue magazine and a major department store, Bloomingdale's. Both Vogue and Bloomingdale's were enthusiastic about his work, and Bloomingdale's was so impressed that Miyake got a small section in the store. His first small collection in New York included T-shirts dyed with Japanese tattoo designs and sashiko-embroidered coats (Sashiko is a Japanese sewing technique that gives strength to the fabrics used in clothing designed for workers). In 1973, when French ready-to-wear was institutionalized for the first time as prêt-à-porter, Miyake was invited to Paris to join a group show with such other young designers as Sonia Rykiel and Thierry Mugler. He opened a boutique there two years later and continued to show his collection in Paris. Miyake later became an official member of the French prêt-à-porter organization.

Miyake laid the foundation in Paris for avant-garde designers worldwide, the Japanese ones in particular. He was showing in Paris long before other Japanese designers, and his presence was further pronounced by the emergence of two influential, norm-breaking designers.

Rei Kawakubo, working under the label Comme des Garçons, and Yohji Yamamoto began to present their collections in Paris in 1981 along with the already-established Miyake, who is considered the founding father of the new fashion trend. These three effectively started a new school of Japanese avant-garde fashion, although it was never their intention to classify themselves as such. Kawakubo said in an interview with Olivier Séguret in Madame Air France, "We certainly have no desire to create a fashion threesome, but each of us has a strong urge to design new, individual clothes which are recognizably ours" (pp. 140-141). Similarly, Miyake is quoted in Dana Wood's article in Women's Wear Daily as follows: "In the Eighties, Japanese fashion designers brought a new type of creativity; they brought something Europe didn't have. There was a bit of a shock effect, but it probably helped the Europeans wake up to a new value" (p. 32).

Miyake was the first to redefine sartorial conventions. His clothing patterns were very different from the Western styles in that he restructured the conventional construction of a garment. As the Time magazine writer Jay Cocks observed:

"Issey," asks one of his friends, standing in the middle of a bustling hotel lobby, "how do I work this?" … "I made it like this," says the designer … He unbuttons a half-cape that spans the sleeves, and puts the loose ends around his friend's neck. (p. 46)

A student who worked as a dresser backstage at one of Miyake's show in the late 1980s recalled the intricate construction of his garment:

"There was a garment that was totally out of shape and had four holes. You could hardly tell which holes are supposed to be for the arms to go in or the neck to go in. During the rehearsal, Issey's patternmakers would be going around the dressers making sure we knew which hole was for which part of the body. Models usually come running back from the stage to get changed to the next outfit, and it is our job to help them get dressed as quickly as possible with the right shoes, the right accessories and so on. It's a madhouse at the back during the show. At that point, you have no time to think which hole goes where! Some dressers couldn't match the neck to the right hole. It was totally wrong. But who can tell? "

In other words, it is up to the wearer to be creative and decide how to wear it. Miyake claims that simplicity is often the key to wearing his clothes, which are versatile enough to be worn in a variety of ways.

Western female clothes have historically been fitted to expose the contours of the body, but Miyake introduced large, loose-fitting garments, such as jackets with no traditional construction and a minimum of detail or buttons. His dresses often have a straight, simple shape, and his large coats with sweepingly oversized proportions can be worn by both men and women. He challenged not only the conventions of garment construction, but also the normative concept of fashion. All of this came at a time when women's clothes by most traditional Western designers were moving in the opposite direction, toward a tighter fit and greater formality. The avant-garde Japanese view of fashion was opposed to the conventional Western fashion. It was not Miyake's intention to reproduce Western fashion, as he pointed out in his speech at the Japan Society in San Francisco in 1984: 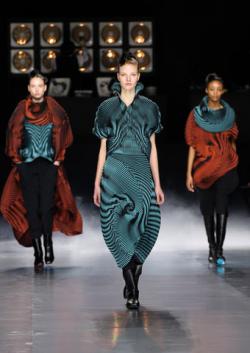 Miyake is best known for his original fabrics. He collaborates with his textile director, Makiko Minagawa, who interprets his abstract ideas. With Minagawa and the Japanese textile mills, he introduced his most commercially successful collection, Pleats Please, in 1993. Traditionally, pleats are permanently pressed before a garment is cut, but he did it the other way round. He cut and assembled a garment two-and-a-half to three times its proper size. Then he folded, ironed, and oversewed the material so that the straight lines remained in place. Finally the garment was placed in a press between two sheets of paper, from which it emerged with permanent pleats (Sato 1998, p. 23).

"I am neither a writer nor a theorist. For a person who creates things to utter too many words means to regulate himself, a frightening prospect."

"When I first began working in Japan, I had to confront the Japanese people's excessive worship for foreign goods and the fixed idea of what clothes ought to be. I wanted to change the rigid formula of clothing that the Japanese followed."

As early as 1976 Miyake began his concept of APiece-of-Cloth (A-POC), or clothes made out of a single piece of cloth that entirely cover the body. He introduced the line, which evolved from his earlier concept, in 1999.

The A-POC clothes consist of a long tube of jersey from which individuals can cut without wasting any material. A large variety of different clothes can be made in this manner; the tubes are manufactured with an old knitting machine controlled by a computer and can be made in large quantities. His objective was to minimize waste by using all leftover material. These garments allow the buyer to size and cut out a small hat, gloves, socks, a skirt, or a dress. Depending on the way the dress is cut, it may appear in two or three pieces. In addition to Miyake's APOC project, new techniques of sewing garments, such as heat taping and cutting by ultrasound, were also featured in his Making Things exhibition at the Fondation Cartier pour l'art contemporain in Paris in 1999.

No history of fashion is complete without the mention of Issey Miyake, as he has made a major contribution to the world of fashion. Miyake retired from the Paris fashion scene in 1999, when Kenzo also decided to withdraw from his own brand. The Issey Miyake brand was taken over by Naoki Takizawa, who had been designing Miyake's Plantation Line since 1983 and Issey Miyake Men since 1993. Many of Miyake's former assistants, such as Yoshiki Hishinuma and Zucca (Akira Onozuka), now participate in the Paris Collection.

Every convention carries with it an aesthetic, according to which-what is conventional becomes the standard by which artistic beauty and effectiveness is judged. The conception of fashion is synonymous with the conception of beauty. Therefore, an attack on a convention becomes an attack on the aesthetic related to it. By breaking the Western convention of fashion, Miyake suggested the new style and new definition of aesthetics. It could have been taken as an offense not only against the Western aesthetic, but also against the existing arrangement of ranked statuses, a stratification system in fashion, or the hegemony of the French system.

Miyake's cutting-edge concept that there is beauty in the unfinished and the neglected has had a major influence on today's fashion. Miyake says, "I do not create a fashionable aesthetic … I create a style based on life" (Mendes and de la Haye 1999, p. 233). He is opposed to the words "haute couture," "mode," and "fashion," because they imply a quest for novelty; he stretched the boundaries of fashion, reshaped the symmetry of clothes, let wrapped garments respond to the body's shape and movement, and destroyed all previous definition of clothing and fashion. His concepts were undoubtedly original, especially when compared to the rules of fashion set by orthodox, legitimate Western designers such as Coco Chanel, Christian Dior, and Yves Saint Laurent. It was Miyake who set the stage for the Japanese look in the fashion establishment.