A key figure in the revival of the Paris fashion industry after World War II, Jacques Fath (1912-1954) created colorful and inventive designs catering to a young and sophisticated international clientele who identified with the vitality of his label. Though Fath was regarded as one of the "big three" Paris designers in the early 1950s-along with Christian Dior and Pierre Balmain-his untimely death at the age of forty-two meant that the impact and importance of his work was often overlooked in comparison to that of his contemporaries. While Fath's designs were right on the mark of the glamorous postwar look, it was his attitude toward business and his understanding of the power of publicity and marketing that helped to place this charismatic and flamboyant designer apart from his peers.

Fath was born just outside Paris into an artistic family in 1912. His grandfather was a successful artist named René-Jacques Fath. Although Fath's great-grandmother had also been an artist who occasionally worked in fashion illustration, the designer did little to suppress the rumor that she had been a couturière to the Empress Eugénie. Encouraged by his family to enter the business world, Fath worked for a stockbroker for two years upon finishing his education. After completing a required year of military service, however, he realized that a more creative career lay in store. He spent some time in drama school and also took evening courses in drawing and pattern cutting. During this period Fath met Geneviève Boucher de la Bruyère, a photographer's model and fellow drama student, who became his wife in 1939. She modeled many of Fath's early creations and came to epitomize the elegantly finished style of the Jacques Fath woman.

At the end of 1936, Fath established a couture house in the rue de la Boetie and showed his first collection of just twenty garments in the spring of 1937. The collection was well received and enabled Fath to build up a steady clientele, although he still had something of a hand-to-mouth existence in the 1930s. Guillaune notes that in later years Fath recalled how he often used the money from a deposit on a garment to purchase the fabric to make it.

Fath served in the French Army during World War II. After he was demobilized following the fall of France to the Germans in 1940, however, he continued to run his house on a small scale. Having already moved once, Fath secured a permanent home for his label in an imposing eighteenth-century building on the avenue Pierre Premier de Serbie. In 1945 he created four designs for the Théâtre de la Mode, a traveling exhibition of fashion dolls that showcased the work of the top Parisian couturiers.

An astute businessman, Fath decided to add a line of perfumes to his fashions. He launched his first perfume, Chasuble, in 1945 and his second, Iris Gris, a year later. Recognizing the incredible potential to expand his business in the United States, he signed a contract with the New York manufacturer Joseph Halpert in 1948. Fath contracted to provide two collections a year, each comprising about twenty models to be marketed in large department stores throughout the United States. His popularity in America was further increased when Rita Hayward chose him to design her wedding dress and trousseau for her marriage to Prince Aly Khan in 1949. Fath had a loyal following in Hollywood, and designed the costumes for several movies both in the United States and Europe. His costumes for Moira Shearer in the celebrated film The Red Shoes (1948) were considered classics.

An attractive and gregarious person, Fath recognized the importance of associating his label with fantasy and marketing images of a lavish lifestyle that his clients could share. He was often photographed with his beautiful wife at evening events in Paris or basking in the sun on the Riviera. He threw large, sumptuous, themed costume parties at his château, inviting an international mix of socialites, actors, and fellow couturiers-which ensured maximum publicity in the press. 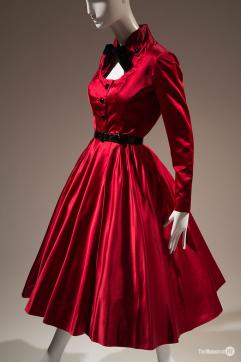 The year 1950 was eventful for the designer, with both the launch of his perfume Canasta and the opening of his boutique. Fath's boutique offered more affordable items, such as accessories, scarves, ties, and stockings. He was also chosen by the Chambre Syndicale de la Haute Couture to become one of five designers, alongside Carven, Desses, Paquin and Piguet, to make up a group of associated couturiers. Later that same year he set up a separate company, Parfums Jacques Fath, to market his growing line of scents. In 1953, preempting similar moves from other designers to target a larger market, Fath made the decision to launch a ready-to-wear collection. The Jacques Fath Université range was inspired by the fast and efficient mass-production methods that the designer had seen in the United States.

Fath's love of the dramatic was evident in his clothes. He drew much of his inspiration from historic costume, the theater, and the ballet. These influences are apparent in his use of the bustle and corsetry as recurring motifs, and in his playful and undulating lines. He perfected a clean and tailored hourglass shape, enhancing it with plunging necklines, sharp pocket details, or dramatic pleats. Fath experimented with asymmetry, pleating, and volume, designing huge voluminous skirts for both day and evening attire. These skirts cascaded from beneath his signature constricted waistline, or appeared as explosions of fabric under large enveloping coats and jackets. Fath's clever use of color ran from discreet juxtapositions of soft colors to loud prints in strong shades. His designs often featured a tartan patterned fabric and a plain fabric combined in one garment and he was unafraid to use bold modern prints to add an extra dimension to the controlled lines of his tailored garments.

Fath's collections of 1948 were notable for rejecting the full New Look silhouette in favor of severe tubular skirts and dresses cut along diagonal lines. His spring collection of 1950 caused a sensation when it was displayed, with dresses featuring a plunging décolletage accompanied by starched wing collars fastened with a bow tie-a suggestive look that later became identified with Playboy bunnies. Fath was extremely fond of fine wool tweed and jersey fabrics for daywear, often draping these materials directly onto a mannequin to create a new design. Rich satins, taffetas, and fine chiffons were his fabrics of choice for evening gowns, and he often used fur, both in trimmings and as full garments, to dramatic effect.

Leaving Behind an Empire

In 1954 Jacques Fath died tragically early at the age of forty-two. He left behind him a fashion empire at the height of its success, with over six hundred employees. Geneviève Fath valiantly took over the business for a few years, but closed the clothing line in 1957. The Fath name continued as a perfume label until 1992, when it was acquired by a succession of different companies. The most recent owner of the Fath label was the France Luxury Group, who resurrected the clothing line in 2002 in an attempt to restore the success of this once great house.

Pierre Balmain. My Years and Seasons. London: Cassell and Co.,1964.