Born in Liverpool, England in 1899, James Laver was a dress historian who worked at the Victoria and Albert Museum in London as a curator from 1922 to 1959. His initial interest in dress grew out of the need to date accurately the pictures in his care. His instrumental relationship to costume quickly changed, and, as he writes in his autobiography, "Having studied the What and the When, I began to wonder about the How and the Why" (1963, p. 240). Laver became one of the most prolific authors in the English-speaking world to write on the history of dress and fashion as well as on the sociology of those topics. Not only did he recast the conventional narratives of European high fashion, but he also wrote about nonfashionable forms of attire, such as school and military uniforms, children's dress, and sporting clothes. He died in 1975.

Laver was fascinated by the effects that the passing of time has upon people and their works. He was greatly influenced in his theory of time by a notion of zeitgeist, or "time spirit," a concept taken from nineteenth-century German philosophy. Zeitgeist proposes the existence of a collective psychological, or spiritual, entity that imparts a distinctive pattern of aims and emphases to a culture, nation, or historical epoch. Drawing on this idea of cultural unity, Laver concluded that every aspect of social life is permeated by the emotional and intellectual dispositions lodged within the zeitgeist. He broadened the scope of the original idea of the "time spirit" by aligning it to a theory of modernity, arguing that all things human are increasingly subject to dictates of "time consciousness." Clothing is one of the things most sensitive to changes in the zeitgeist. In dress is found an immediate physical manifestation of the patterns of the time spirit (style), while in their rapid changes (fashion) can be observed the ever widening influence of the modern form of time. As Laver observes, "Nothing illustrates the Triumph of Time more clearly than the growing dominance of fashion" (1933, p. 132).

Laver's approach to the forms of clothing was based upon his belief that there are "no accidents in the history of dress" and that "all clothes are inevitable" (1949, p.6). He explains this assertion so:

"In every period costume has some essential line, and … [when examining previous fashions] … we can see quite plainly what it is, and can see … that the forms of dresses, apparently so haphazard, so dependent on the whim of the designer, have an extraordinary relevance to the spirit of the age (1945, p. 250). "

The task is to understand the meanings of this "essential line" as it insinuates itself into the dress styles of a culture or epoch. Some of Laver's most controversial assertions are to be found in the connections he makes between the social and political structures of an age and in the details of its dress, as indicated in Taste and Fashion from the French Revolution until To-day:

"The aristocratic stiffness of the old regime in France is completely mirrored in the brocaded gowns of the eighteenth century. …Victorian modesty expressed itself in the multiplicity of petticoats; the emancipation of the post-War flapper in short hair and short skirts (1937, p. 250). "

Laver wrote a book about the French physician and astrologer Nostradamus (1942) and also A Letter to a Young Girl on the Future of Clothes (1946). At times, he came close to seeing the interpretation of clothing and its changes as being akin to clairvoyance. He names this apparent ability of clothing to anticipate the future "the wisdom of forms." When, later in life, he became a media personality, he would shock audiences by asserting that links exist between the fluctuations of the stock market index and a propensity for women to abandon corsets. In his book Style in Costume (1949), Laver describes his method for drawing these conclusions as "to take some dominant shape of dress-a hat, a trouser-leg, or whatever it may be-and to place it beside some form of architecture or interior decoration of the same epoch, and to note the parallelism, if such exists, between them" (p. 7). 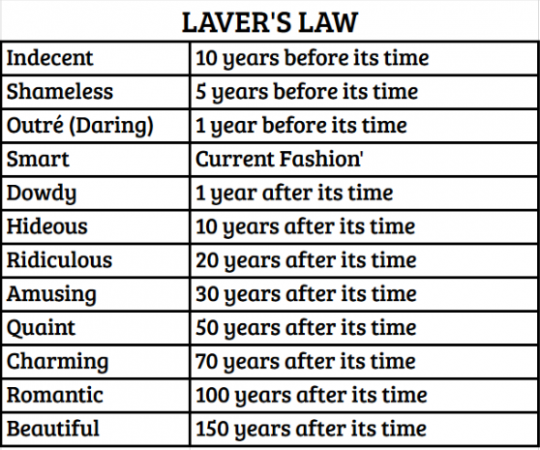 Laver stressed that in modern life things are increasingly subject to change, and the existence of dress fashions is evidence of the extent to which time has displaced place as the major influence on clothing. He saw the process of fashion as having two aspects. There are the broad, objective rhythms of style change in dress and the subjective, but shared, aesthetic dispositions (taste) that incline groups to prefer one type of clothing to another. Laver was convinced that neither of these sorts of change is accidental or arbitrary, and in his book Taste and Fashion: From the French Revolution to the Present Day (1945), he attempted to describe and explain the regularities he noticed in both these areas.

Laver's approach to taste is novel because, rather than focusing on why certain types of clothing are deemed fashionable, he instead asks the question: How can it be that what was thought of as fashionable becomes grotesque and can then start to appear charming as time passes? The answer is his list of the stages (Taste and Fashion, p. 258) undergone in the decay of chic.

Laver wrote or edited seventy books between 1921 and 1972, at least twenty-seven of which had to do with dress or costume. He explored a variety of topics, from poetry to art to the theatre. He was also the author or coauthor of seven plays.

Laver encountered more serious intellectual difficulties in explaining the objective shifts in dress styles. As he investigated forms of attire such as uniforms and professional dress, he realized that not all clothing changed at the same rate. To explain these different rates of change or, in some cases, their complete absence, he began to supplement his ideas about the relation between zeitgeist and dress with those of Thorstein Veblen and J. C. Flügel.

When Laver published his book Dress in 1950, he explained changes in dress styles using a version of the "three motives" model of the nineteenth century. Laver argued that clothing both expresses and is shaped by three fundamental principles: the hierarchical principle, the attraction or seduction principle, and the utility principle. The seduction principle plays the most significant role in fashion change, particularly as it affects women's clothes. Laver theorizes that the seduction principle is the most important because "our clothes are dictated by the fundamental desires of the opposite sex." (1950, p. 15). He goes on, "Men still choose their mates by their physical allure; that is why women's clothes follow what might be called the Attraction Principle; they are designed to make their wearers as physically attractive as possible" (1950, p. 15).

Women, according to Laver, have to compete with one another through their appearance, and wherever there is sartorial competition there will also, he argued, be fashion.

A Letter to a Girl on the Future of Clothes. London: Home and Van Thal, 1946.

Dress: How and Why Fashions in Men's and Women's Clothes Have Changed during the Past Two Hundred Years. London: John Murray, 1950.

Museum Piece; or, The Education of an Iconographer. London: Andre Deutsch, 1963.