Jeanne Lanvin (1867-1946) was born in Paris, France, and spent much of her youth as a seamstress and millinery apprentice. In 1883 she was employed to trim hats in the workshop of Madame Felix at 15, rue du Faubourg Saint-Honoré. Lanvin established her own millinery workshop at the age of eighteen in 1885. With just forty francs in cash and three hundred francs in credit, Madame Lanvin opened her millinery house in a modest apartment at 16, rue Boissy-d'Anglas in 1889.

Lanvin married the Italian aristocrat Emilio di Pietro in 1895. Although their marriage was brief, ending in 1903, the union produced a single child, Marguerite Marie-Blanche, who was born in 1897. This child inspired and supported one of the greatest design careers of the twentieth century. In 1907 Lanvin married Xavier Melet, a journalist. Lanvin's daughter married for the second time in 1925; her husband was the comte Jean de Polignac, and she became known as Marie-Blanche, comtesse de Polignac.

History of the House of Lanvin

In 1908 Lanvin opened a children's clothing department in the millinery shop, inspired by the wardrobe created for her own daughter, and just one year later she opened departments for ladies and girls as well. Becoming a full-fledged couturière, she joined the Syndicat de la Couture, the ruling body of the haute-couture industry. Her first dress designs followed the lines of the chemise frock, a long, slender, empire-waist design that offered ease of movement. By 1910, a mere two years after opening her children's department, her designs appeared in Les modes, a French fashion periodical.

By 1925 twenty-three ateliers operating under the Lanvin name employed up to eight hundred people. That year, branches of Lanvin were opened in Cannes and Le Touquet. Through the years the house continued to grow, with several other boutiques opening in foreign locales: In 1927 alone, additional shops were opened in Deauville, Biarritz, Barcelona, and Buenos Aires. Lanvin created departments for menswear, furs, and lingerie in 1926 and then launched several successful fragrance lines, including Arpège (1927), Scandal (1933), and Rumeur (1934).

When Jeanne Lavin died in 1946, her daughter, Marie-Blanche, became the chairman and managing director of Lanvin and Lanvin parfums; she remained at the helm of the businesses until her death in 1958.

In 1950 Marie-Blanche invited Antonio Canovas del Castillo to design the haute-couture collection. This position passed to Jules-François Crahay in 1963; to Maryll Lanvin, the wife of Jeanne Lanvin's nephew, in 1985; and, finally, to Claude Montana in 1990. He presented five haute-couture collections, two of which won the Golden Thimble Award from the Chambre Syndicale de la haute couture parisienne. By 1993 the House of Lanvin had withdrawn from haute couture to concentrate on their image as a luxury goods house. 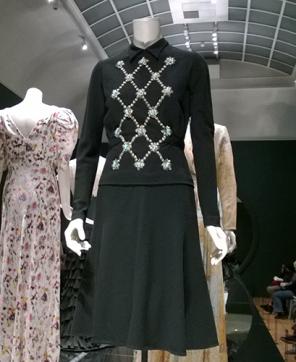 The design career of Madame Lanvin survived sixty-one successful and productive years. Lanvin is the oldest surviving couture house in continuous existence, from 1909 to 1993. In the early 2000s, Lanvin continues to focus on ladies' ready-to-wear clothes and luxury accessories. Collections for men and made-to-measure sportswear are also produced. Fragrance remains part of the Lanvin offerings, releasing Oxygene to the masses. L'Oreal, the parent company, sold Lanvin to an unidentified Chinese owner in 2001 who focused on finding a designer who could put a modern edge on the historic, antiquated company; among designers employed during this period were Ocimar Versal Oto and Christine Ortiz. In 2003, Alber Elbaz began designing the luxury collection and has been making considerable progress in reviving the Lanvin name, gaining a more youthful clientele of models and celebrities.

For the sole purpose of advertisement and publicity, Madame Lanvin employed the innovative technique of dressing the highly social demimondaines and actresses. Informally modeling the latest creations of the couture house, they created great interest among the social set. Demimondaines were a less respectable group of women who had lost their social standing-although they were highly social and extremely fashionable-due to sexual promiscuity or other ethically questionable activities (such as prostitution). Their male companions gave them the money to buy the finest fashions and accessories; in fact, demimondaines were notably the most fashionable women in town.

Unlike her successful contemporaries, Madame Lanvin shunned the spotlight. She avoided large social settings, preferring her small, creative circle of artists, musicians, designers, and writers. On rare occasions Madame Lanvin could be seen at horse races for the sole purpose of research. Her attendance at these events enabled her to see what women were wearing, what looked good and what did not, how fabrics moved, how silhouettes looked, what was cumbersome, and what was ridiculous. In addition, by observing what the women were wearing, she could deduce what they would next be desiring to add to their wardrobes. Lanvin downplayed her image and personality, maintained a discreet background position, and rarely socialized with her clients. These habits contributed to her anonymity in the years following her death.

The originality of Lanvin garments, constructed in such a masterly fashion, lay in their surface detail and embellishment. Madame Lanvin extracted inspiration from various objects to be translated into viable, modern, functional design. For example, her signature color, "Lanvin blue," was inspired by the fifteenth-century Italian frescoes of Fra Angelico. Her desire to create the perfect colors for her designs prompted her to establish her own dye factories in Nanterre in 1923. This shrewd move ensured the originality and exclusivity of her colors, and, indeed, competitors who tried could never successfully duplicate them.

The beading and embroidery patterns on her designs were inspired by various exotic elements and destinations. Lanvin was an avid traveler and methodical collector of objects from various cultures around the globe; they later served as a personal library of inspiration.

The House of Lanvin was a fashion leader and innovator in the 1920s, utilizing extraordinary beading techniques; and in the 1930s, with technically innovative surface treatment ensuring the singularity of her creations. Versatility contributed to the longevity of the couture house, as the Lanvin image was clearly defined and redefined from season to season. Marie-Blanche was her mother's muse and lent her youthful perspective to the designer's creative ideas. Consequently, the House of Lanvin forever maintained its image of youth, femininity, and beauty.

Lanvin women typically began their association with the house as debutantes and maintained their loyalty through their weddings, motherhood, and widowhood. The youthful silhouette of the robe de style, synonymous with Lanvin, experienced great success, as it was offered in every collection. It flattered every figure at every age for all occasions. The robe de style was inspired by eighteenth-century fashions and consisted of a quasi two-dimensional silhouette created by the use of a pannier, or basket-like structure on either hip. This silhouette achieved great success during the 1920s as an option to the slender, cylindrical silhouettes promoted by other couturiers.

Madame Lanvin successfully combined romanticism and historicism in the most modern way. "Modern clothes need a certain romantic feel," she remarked (Vogue, 1 June 1942, p. 66). The youthful, elongated torso and romantic full skirts created a large surface that served as a canvas for any tasteful combination of beading, embroidery, or appliqué.

While the success of the vast Lanvin empire was a substantial accomplishment in itself, Madame Lanvin applied her skills to other creative areas as well. Pooling her talents with Armand Albert Rateau, a great French architect, in 1922, she completed several interior design projects, including her own homes, shops, and the Théâtre Daunou. She also opened her first interior decoration store, Lanvin Décoration. In addition, she shouldered the enormous responsibility of organizing and executing the couture exhibits at many of the great world expositions. For these efforts she was created chevalier of the Légion d'honneur on 9 January 1926. In 1938 Madame Lanvin was made an Officier of the Légion d'honneur.

"The longevity of this couture house may be attributed to the untiring force and determination of a woman driven by the relentless need to create, succeed, and excel within her chosen field among many worthy, predominantly male, contemporaries." -- Dean L. Merceron

Lanvin's legacy to the world of fashion is youth, beauty, and feminity-modernity softened with romance; beautiful colors in feminine silhouettes that blur the lines of age. The robe de style was a dress that could be worn literally by everyone. Lanvin was primarily an artist, and a businessperson second. She was guided by her artistic sensibility and supported by her fair sense of business and strong work ethic. She was an innovator and a leader, working for the industry as a whole, not just for the house of Lanvin. As one who "had it all," she was a role model for women: She started her own business, married, and had a child. Even as a single mother, she continued to run her empire and raised her daughter to be an inspirational success.