Lawrence Dion Steele has been known since 1994 for his feminine and unapologetically sexy designs, produced in Milan, Italy. Lawrence Steele was the second of four children, born in 1963 to an Air Force family in Hampton, Virginia. Although Steele was raised in Rantoul, Illinois, he traveled extensively with his family. Working for a jeans company helped finance his education at the School of the Art Institute of Chicago. He graduated from the school with honors and a bachelor of fine arts degree in 1985.

After graduation Steele worked in Japan as an anonymous designer during the 1980s. He always knew, however, that he wanted to establish a business in Milan. Consequently he directed his attention toward Italy's fashion capital, where he lived and worked in the early 2000s.

Steele began his career in Italy by assisting the design team of Jan and Carlos, known for minimalist design and fine machine-made knitwear. As manager of several collections for designer Franco Moschino from 1985 through 1990, Steele gained valuable experience translating the designer's riotous and radical ideas into actual designs. He was present when Patrizio Bertelli and Miuccia Prada expanded their vision of adding a ready-to-wear line to the Prada luxury leather goods company between 1990 and 1994. Steele recognized the value of their formidable personalities through collaborating with them.

Steele began defining his own fashion philosophy in the early 1990s. In 1994 he launched the Lawrence Steele label with the descriptive title of Platinum s.r.l., produced by Casor SpA in Bologna. The fashion press and industry gave Steele's first collection of 120 garments a particularly favorable response. This initial collection, however, did not reflect the minimalist construction and attention to details that became the hallmarks of his later style. Instead he paraded interpretations of Russian and Eskimo dress down the runway.

Beginning in 1998, Lawrence Steele's knitwear was produced by Miss Deanna SpA in Reggio Emilia. The most outstanding models of the early twenty-first century displayed his 1999 collection, "exalting feminine dress" (Lenoir, p. 27) in New York City. In the same year, Steele introduced LSD as a collection of urban active wear for men and women, made with innovative technical fabrics and produced by Alberto Aspesi and Company SpA. A Platinum s.r.l. spokesman announced an agreement with the Legnano-based manufacturer to produce and represent the Lawrence Steele label.

The Lawrence Steele label was available in designer salons in department stores and high-end boutiques around the world in the early 2000s. During his association with Casor, Steele motivated the Bolognese factory to implement new and unusual methods for treating materials. To accommodate their exacting client, Casor's staff perfected gold-leaf finishing on baby alpaca, stretch cashmere, oil-slick neoprene, gold suede, sequin detailing on silk, and multiple zippers on satin. Steele also created ensembles of leather with Lycra at the request of the DuPont Corporation. This exclusive product gives exceptional elasticity to natural leather.

Steele collaborated with the artist Vanessa Beecroft, known for her living compositions and photographic documentation, in a public event in July 2001. Steele identified the event as an aesthetic presentation as opposed to a political protest. Thirty black female models stood motionless for several hours in the Palazzo Ducale of Genoa. The women had been made uniform in color with body paint and identical wigs, and were dressed in black two-piece bathing suits detailed with clear plastic straps. Designer Manolo Blahnik produced the models' spike-heeled footwear according to Steele's suggestions. 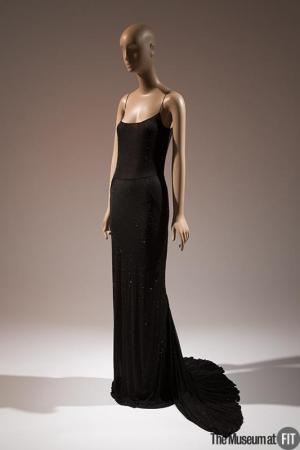 While Steele's demeanor in interviews was calm and sweet, his intensity and ambition radiated through his descriptions of his clothing. "I make the clothes modern women will find utterly desirable; my vision is glamorous, sensuous and a little dangerous and it includes breasts!" (Specter, p. 98).

The on-screen glamor of Diana Ross in the film Mahogany dazzled Steele as a boy; as an African American, he proudly acknowledged her as his muse. His ideal female of the early 2000s had a long neck, even longer legs, and a slim, vibrant body. Marlene Dietrich, Marilyn Monroe, and Josephine Baker were the film sirens who appeared on his inspiration boards. Copies of line drawings by Madeleine Vionnet, Cristóbal Balenciaga, Coco Chanel, and Charles James were tacked to the walls of his atelier above random stacks of international periodicals.

Steele's memorable runway presentations attracted the interest of such stylish celebrities as Jennifer Aniston, Naomi Campbell, Erin O'Conner, Lauryn Hill, Meg Ryan, Oprah Winfrey, and Julia Roberts. The atmosphere at his shows compared with the electric excitement of a rock concert. Steele designed a "red carpet" gown in layers of black chiffon with a plunging back and twisted halter detail displaying the shoulder area, which he consided an erogenous zone. He watched Aniston walk down the aisle wearing the gown he designed for her wedding in 2001-hand-stitched and seed-pearl-encrusted with a 28-yard skirt of silk tulle. "I wanted the effect of a cloud around her feet" (Alexander, p. 29).

During the development of a Steele collection, swatches of sequined animal prints and paillette-strewn sheer fabrics may be arranged for inspection on the work-room floors of an uncluttered but busy atelier. Press releases described Steele's pieces as modular and precise, insulating and industro-luxe in such colors as metal, bark, and dust. Textures were described in terms of weightless quilting and padded taffeta. Themes derived from popular culture inspired bomber jackets molded in mink and track suits edged in gold braid. Program notes listed such directions as Refined versus Primitive. One collection contained references to "straightforward," "clean," and "necessary."

The designer's philosophy of modern minimalist design was embodied in such themes such as Smoking in Bed, Hand Finished, and New Volume. He mixed tuxedo detailing with lingerie that included oversized crepe pants and camisoles. Steele's floral patterns capitalized on the recognition of computer-generated patterns. Steele persisted in editing and refining his ideas, beginning with the concept of "elegance as refusal" (Singer 1998, p. 358).