Main (after his mother's Scottish maiden name and pronounced like the New England state) Rousseau Bocher (his French Huguenot surname was pronounced Bocker) was born in 1891 on Chicago's West Side. Artistically inclined from childhood, he attended the Chicago Academy of Fine Arts and had moved to New York City by 1909 to study at the Art Student's League. Broadening his pursuits to include classical voice training as well, he departed for Paris and Munich, where he celebrated his twenty-first birthday. While studying music, he began sketching dresses for fashion designers to help support his mother and sister, who had joined him abroad. They returned to America at the onset of World War I in 1914, but not before three of Main Bocher's drawings were included in an exhibition at the Paris Salon des artistes decorateurs. In New York he financed his studies with the career-building vocal coach Frank LaForge through the sale of his sketches to another Chicago transplant, ready-to-wear manufacturer Edward L. Mayer. This marked the true beginning of his fashion career.

Back abroad in 1917 with a volunteer hospital unit, Bocher enlisted in the United States Army in the Intelligence Corps. Demobilized in France in 1918, he remained there and returned to singing. A vocal failure during a pivotal audition finally forced him to abandon his operatic aspirations and to focus all of his creative attentions on fashion. He applied to the Paris office of Harper's Bazaar as a sketcher, then joined French Vogue in 1923 as the Paris fashion editor, became editor-in-chief in 1927, and resigned over a salary dispute in late 1929. With the financial backing of a discreet group of compatriots that included Mrs. Gilbert Miller, daughter of the American banker and art collector Jules Bache, he now turned his seasoned eye and editing skills toward the realization of his own fashion vision.

At a time when American designers had yet to establish credibility on their native soil, Mainbocher, his name now contracted in the manner of Paris-based couturiers Louiseboulanger and Augustabernard, opened his salon at 12, avenue George V. The impeccable designs and pristine dressmaking of this American-in-Paris proved irresistible, especially to the coterie of international hostess and taste arbiter Elsie de Wolfe. Through her influence Mainbocher was introduced to the most celebrated client of his young career, Mrs. Wallis Warfield Spencer Simpson. The international publicity surrounding the austerely classic dress he devised for her Château de Cande wedding to the Duke of Windsor in June 1937 catapulted him to celebrity status, spawning a frenzy for "Wally" dress copies and the color "Wallis blue." His couture models were imported into the United States by elite establishments, including Hattie Carnegie, I. Magnin California, Saks Fifth Avenue's Salon Moderne, and Jay Thorpe. By decade's end Mainbocher had become a pillar of the world of couture and in the process secured the adoration of a clientele who followed him back across the Atlantic upon his departure from occupied Paris in 1939.

Throughout his forty-year career, Mainbocher's beliefs regarding the purpose and nature of clothing were inseparable from his work and were routinely incorporated into press coverage, providing a running philosophical commentary on his collections:

"Between the beautiful classical that has proved its worth and some new stunt, I always choose the tried and true. I like persuasive dresses that have manners and I hate aggressive ill-bred concoctions (Bocher, 1938, p. 102). A woman who has to remember to arrange any part of what she is wearing, simply cannot be smart. A well-dressed woman always appears to have forgotten what she is wearing.… To me, repose and natural ease are among the inimitable and essential attributes of the well-dressed woman (Bocher, 1950, p. 1). "

The fashion press celebrated the opening of Main-bocher's reincarnated salon at 6 East Fifty-seventh Street and his first American-designed collection late in 1940. The November 1941 Harper's Bazaar applauded his rigorous attention to maintaining all the traditions of his Paris house. Innovating ingeniously around daunting governmental restrictions (his invoices stating that his designs met with L-85 standards), his work remained fresh and appealing throughout the balance of World War II. During this period he featured glamour belts, aprons, and overskirts to vary the look of concise short or long black evening dresses. He launched a sensation for plunge-backed evening gowns and "Venus pink" with his Grecian designs for the 1943 Broadway production of One Touch of Venus starring Mary Martin. His surprising English cashmere sweaters, lined either in fur or coordinating silk, or jeweled, elegantly addressed wartime fuel conservation. 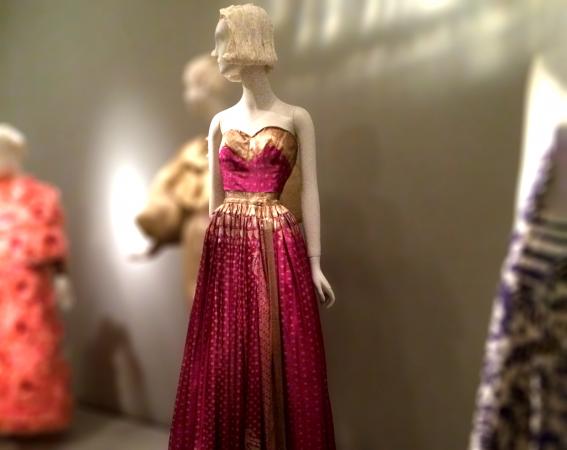 The steadfast loyalty of his patrons and press withstood the challenge of the postwar return of French fashion and Christian Dior's triumphant "New Look" (a silhouette Mainbocher himself had presaged with his 1939 Victorian cinch-waist.) Mainbocher was as passionate about fabric as he was fastidious about craftsmanship and design. The opulent simplicity of his clothes weathered the ephemeral. His silhouettes nodded to trends yet remained true to Mainbocher. His archetypal vision of pedigreed, meticulous clothing was as readily transcribed into his polished 1950s designs as it was interpreted in architectural fabrics to relate his minimalist eloquence to the space-aged spirit of the 1960s.

Mainbocher closed the doors of his salon at 609 Fifth Avenue in 1971. Returning to Europe, he alternated his final years between Paris and Munich, where he died in 1976.

Although a self-described quiet innovator, Mainbocher succeeded in incrementally altering the complexion of contemporary fashion. As a fashion editor he initiated the "Vogue's Eye View" feature and introduced the terms spectator-sports clothes and off-white. As a couturier he promoted the nontraditional use of cotton gingham and lingerie crepe and glamorized cloth coats for evening use. His was the first strapless evening dress, which he executed in black satin in 1934. His wartime civilian and military contributions included "day length" evening dresses and adorned sweaters as well as uniform designs for the WAVES, the women's auxiliary of the Marine Corps, and the American Red Cross. In 1948 he designed the intermediate Girl Scout uniform.