Although Mariano Fortuny considered himself a painter, he pursued various critical and aesthetic interests. He is primarily remembered for remarkable layers of dyed and patterned fabrics, which he created between 1906 and 1949. Born in Granada, Spain, to an upper-class family of distinguished painters, Mariano Fortuny y Madrazo (1871-1949) is more often associated with the city of Venice, Italy, where he lived and worked most of his life.

As a child, Fortuny was surrounded by eclectic assemblages of ephemera: antique textile remnants, carpets, costumes, vestments, furniture, armor, and implements of war collected as art objects. Following the untimely death of his father, the painter Mariano Fortuny y Marsal, in 1874, young Mariano, his mother, and his sister moved to Paris in 1875. Although he considered himself self-taught, he was guided toward the arts by his uncle Raymundo, a painter, and informally by the sculptor Auguste Rodin. He later expanded his education in Germany, where he studied physics and chemistry. In 1889 the Fortuny family traveled to Venice; finding it a romantic and artistic center, they moved there permanently in 1890.

Fortuny's garments and textiles fuse history, anthropology, and art. By blending various dyes he achieved luminous, unique colors. Resurrecting the ancient craft of pleating fabric, artistically symbolizing a reflection of the sun's rays, Fortuny developed his own interpretation of this craft and registered his heated pleating device in 1909. Between 1901 and 1933 he registered twenty-two patents, all of which related to garments and printing methods. Prolific in artistic pursuits, he printed etchings, invented a type of photography paper, designed lamps and furniture, bound books, and maintained an extensive, private reference library. He displayed his own artistic creations in the ground floor showroom of his residential palazzo.

An interest in Richard Wagner's operatic productions drew Fortuny to Bayreuth, Germany, in 1892. Fascinated by the dramatic spectacle unfolding before him, he developed a revolutionary, indirect lighting system that transformed cumbersome stage scenery and obsolete gas lamps, significantly changing the atmosphere onstage. Commissioned by an art patron, he constructed two enormous, vaulted quarter spheres of cloth, expanded over a collapsible metal frame, which amplified color and sound. The spheres were 225 square meters (269 square yards) in area and 7 meters (7.6 yards) high. His first theatrical costume was a figure-enveloping, border-printed scarf titled the Knossos, presented in a private theater in 1907. Isadora Duncan was the first to wear the Knossos scarf. At the home of his patron Cotesse de Bearn in 1906 in Paris, his stage lighting system first appeared as well as his first textile creation printed with geometric motifs. This theatrical endeavor transformed his awareness and appreciation of materials into a tactile form, quite separated from his representational works.

Fortuny preferred working alone to avoid conflict, illustrating his theory that an artist must control all aspects of the creative act, but he did allow collections of his fabrics, gowns, and accessories to be sold in a Paris boutique operated by Paul Poiret. His gowns were also available at Liberty of London and his shops in Paris, London, and New York.

Throughout his life Fortuny maintained a striking figure, dressing in artistic combinations, even regional and ethnic dress. He married Henriette Negrin, an accomplished French seamstress who designed patterns for his garments. Together, they developed methods and practices in the atelier of their Palazzo Orfei residence. Driven by spirited curiosity rather than training as a couturier, Fortuny depended on ancient and regional styles that became the foundation of his modern and comfortable styles for women, costumes for the theater, and yardage for interiors.

In an atmosphere of antiquated splendor, Fortuny dressed Venice's artistic community at the turn of the century, where Americans and Europeans-including the actress Sarah Bernhardt, the dancer Isadora Duncan, and the poet Gabriele D'Annunzio-were among those who sought cultural legitimacy with the notion that the classical and the beautiful were one. Artists of the theater and American travelers were the first to wear his gowns in public. 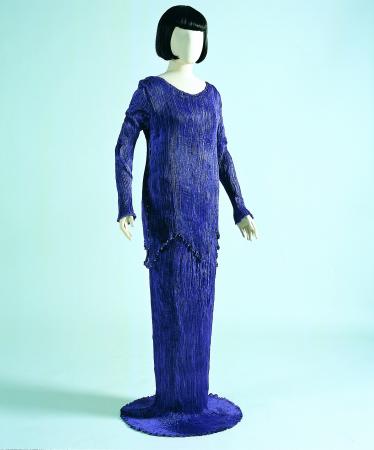 Among the garments viewed in museum collections, the loosely twisted, pleated gowns labeled Delphos and Peplos, of Greek origin, are exhibited more frequently than any others. His diagrams of the Delphos and the wooden structure fitted with ceramic tubes that heat-set his signature pleats are also popular museum exhibits. Similar avant-garde dresses, referred to as tea gowns, enhanced Fortuny's popularity with the wave of orientalism that dominated the arts in the years before World War I.

Echoing his knowledge of textile history, Fortuny produced his imaginative manipulations through printed and applied methods, freeing him to experiment. His vertical pleating and undulating silk and cotton yardage yielded natural elasticity, flowing effortlessly over the contours of female forms. Delicate Murano glass beads were laced onto silk cording and hand-stitched along hems, seams, and necklines, giving weight to an even edge, similar to the ancient Greek method of weighting fabric with metal. His method was to piece-dye cut lengths, frequently layering natural and, later, aniline dyes and occasionally incorporating agents to resist previously applied colors, which resulted in random, transparent irregularity. Clients were required to return the garment to the island factory of La Giudecca in order to clean and pleat the material.

For his imported silk, cotton, and velvet surfaces, Fortuny studied Japanese and Southeast Asian methods of hand-printing, including the pochoir method, for precise color transfer to cloth. Block printing and silk screening, positioned on seams in central areas of a garment and along edges, provided striking effects. Fortuny combined metal powder with pigments to simulate shimmering metallic thread, inspired by sixteenth-century velvets. On occasion, more than a dozen processes-including paintbrushes, sponges, and decolorization-were implemented on each unique length. The paintbrushes and sponges were used to create a marbled effect, already a method known in Lyon, to create the same effect of patchiness. Artisans were directed to incorporate various methods to correct or retouch the yardage. Textile patterns and motifs reflected his studies in the art museums of Venice, where he made note of the dress depicted in canvases. When he adapted the traditional practice of goffering, realizing a relief in velvet pile, he may have used block-printing methods and silk screening. His pattern adaptations of regional dress, hand-stitched with one of three labels (Mariano Fortuny Venise, Fabriqué en Italie, or Fortuny de Pose), can be identified as variations inspired by ancient Greek dress for men or women, dress of the Renaissance and the Middle Ages, the Moroccan djellaba, North African bournous, Arabic abaia (a kind of caftan), Japanese kimono, Coptic tunic, and Indian sari.

Fortuny in the Twenty-First Century

In 1922 Fortuny, Inc., was established in collaboration with the American interior designer Elsie Lee McNeill, later Countess Gozzi. Henriette remained in the palazzo to oversee the production of silk and velvet garments, while Fortuny moved production to a factory on the island of La Giudecca. After his death in 1949, garments were no longer produced. Gozzi continued to promote the mysteries of his textiles for almost forty years, until she sold her rights to printing yardage to her friend and attorney, Maged Riad, in 1998. In the early twenty-first century, Riad's children became responsible for the firm in New York, and his brother took over as the artistic director of production on La Giudecca. Appointments for research in the Palazzo Fortuny are limited, though the building is frequently the venue for art exhibitions, managed by the city of Venice.

The company's contemporary collection of yardage contains approximately 260 original patterns and color combinations printed on silk, velvet, and Egyptian cotton, including irregular application by artisans, who give each length an aged and artistic patina. Antique textile dealers and international specialists represent original yardage.

Since Fortuny creations were originally an attraction for travelers, interpretations of his artistry have been faithfully recovered by Venetia Studium, directed by Lino Lando and available to the visitor to Venice. Connoisseurs, collectors, historians, and antique dealers agree that Mariano Fortuny achieved an elegant, impressive balance, fusing art and science. His legacy proves his relevance.