Martin Margiela (1957- ) was born in Hasselt, Belgium. He studied fashion design at the Royal Academy of Fine Arts in Antwerp-at the same time as Ann Demeulemeester-followed by a three-year apprenticeship with Jean-Paul Gaultier (1984-1987). He established the Maison Martin Margiela in Paris in 1988, together with Jenny Meirens, a boutique owner. Margiela was categorized more than once as the deconstructivist par excellence in a period when the term was applied indiscriminately to designers whether or not it was appropriate. Margiela was probably one of the few designers in the early 2000s whose work could be fairly described as deconstructivist. His investigation into the different aspects underlying any article of clothing, such as form, material, structure, and technique, were central to his entire body of work. His work was deconstructivist because he took not only the garment itself into consideration, but also the system that produced it. Ideas about haute couture, tailoring, high or low fashion, innovation, and commercialism do not arise from any apolitical standpoint, nor are they formulated as criticisms of established fashion assumptions. Margiela's work began from a set of analyses questioning the established theories of what already exists in order to search for alternatives that can be brought to life, both within and outside the system.

Margiela's attention to tailoring often exposed the production process behind the clothing, or revealed techniques that traditionally remain hidden in its production. The experimental aspect of his clothes in fact did not take place at the expense of ease in wear or aesthetic considerations. Margiela's summer collection for 2004 included blouses and dresses whose forms were no longer determined by classic lines or cut, but rather by small black stitches that stood out sharply against the fabrics he selected. The pleating and folding techniques that formed the starting point for his 2002 and 2003 collections were further developed in the 2004 garments. The tiny stitches were applied with surgical precision in order to achieve the correct fit. The result was elegant, slightly aggressive, yet simultaneously a tribute to the work of the many professionals in the field of fashion who remain literally unseen.

The study of form was equally central to Margiela's 1998 summer collection, which was a series of "flat garments." When the pieces are not being worn, they seem to preserve the two-dimensional structure of the paper pattern. The armholes were not placed at the sides of these garments, but rather cut out of the front section. Only when the flat garments are put on does their actual three-dimensional form appear. A second collection worthy of note in this regard was Margiela's summer 1999 collection. The basic idea was to reproduce a series of doll clothes enlarged to human size. The designer retained the disproportions and finishing details, however, resulting in rather alienating pieces with giant buttons and zippers.

In 1997 Margiela based two successive semi-couture collections on an old Stockman tailor's dummy. Various elements that pointed to subsequent stages of the production process, such as the sections of a toile, for example, were permanently pinned to the bust as part of a jacket. Other jackets assumed a masculine shoulder line, with the inside of the prototype replaced with a second structure and with a feminine shoulder line. Removing the sleeves revealed both the masculine and the feminine tailoring. Shoulder pads were sometimes placed on the outside of the garment or used as a separate accessory: the inside became the outside.

This process of reversal also applied to other aspects of the designer's work. The use of recycled materials was particularly evident in Margiela's early collections. In his first winter collection, displayed in 1988, shards from broken plates were worked into shirts. Plastic shopping bags were cut to form tee-shirts and held together with brown cellophane tape. In the summer 1991 collection, secondhand ball gowns from the 1950s were dyed gray and given new life as waistcoats; old jeans and denim jackets were reworked to become elegant, full-length coats.

Margiela's reversals were more frequently a source of confusion. In his 1996 summer collection, photographs of garments, knitted goods, sequined evening wear and different fabrics were printed onto lightweight cloth with a subtle fall, which was in turn worked into simply cut designs. The very realistic printing created a trompel'oeil effect or optical illusion and suggested tailoring that the actual pieces did not have. The models wore cotton voile during the show to cover their faces and hair. Hiding the physical features that make a person unique increases the desire for identity and uniqueness evoked by the clothing itself. 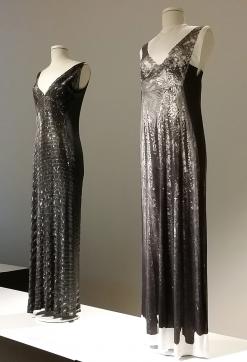 The most noteworthy detail in Margiela's clothing was the nameless, somewhat oversized white label, identifiable on the outside of the garment by four white stitches attaching its corners. The label itself carried neither brand identification nor size indication, and therefore seemed utterly extraneous. The conspicuousness of the white stitches increased the visibility of something that at first did not seem intended to attract attention. The phenomenon of merchandise branding was thus referenced in all its complexities and ambiguities. Margiela's refusal to supply his designs with a brand name produced the opposite effect, a select in-crowd who recognized his "brand." In similar fashion, Margiela the designer wished to disappear behind his work in a decade characterized by extreme narcissism, in which other designers attained superstar status. No photographs of the designer were distributed. Communications concerning the collections consistently took place only through Maison Margiela. Interviews were allowed only by fax, and were always answered in the first person plural. This created an ambiguous result as well. Margiela's refusal to appear in person resulted in the creation of a personality myth.

Maison Margiela seemed to rebel against the rhythm of production that the economic system imposes on designers, not by radically rejecting the system but by filling it in with its own table of contents. In the strictest sense, the house's collections and its various sideline activities are not bound to trends or seasons. Consequently, the tabi boot-a Japanese-inspired shoe in the form of a hoof-reappeared with each new season, albeit in slightly modified form. Moreover, not only were existing garments reworked into new creations, but also the "success items"-or favorite pieces from previous collections-were repeated. This method led to the evolution of different lines, each of which was given a number that referred to differences in content, working method, and technique. All the lines except 1-the main line for women-bore labels printed with a line of numbers from 0 to 23 and the relevant number was circled.

Margiela was engaged in 1997 as the in-house designer for Hermès, one of the greatest luxury houses of France, with an established reputation for quality and finishing. Here, too, Margiela succeeded in further developing the achievements of his characteristic investigations into tailoring, although he worked entirely within the Hermès atmosphere and tradition. The interpretation that Margiela contributed to Hermès was a guarantee of absolute quality and excellence in luxury productions in leather and cashmere. No busy prints were to be found, but rather a return to the article's essence, and the core of true luxury, that is, the stripping away of everything that is not essential.

Where the inside was brought outside in more experimental fashion in Margiela's own collections, the inside was also central to flawless finishing in his work for Hermès. Maison Margiela introduced line 4 in 2004, which appeared to be an in-between collection that bridged Margiela's work for his own house and his work for Hermès. Collection 4 represented a reworking of a number of pieces from line 1, with inside finishing placed on the outside of the garment but now executed in more traditional and luxurious form, as was customary in the Hermès tradition. Only the neck and shoulders of these garments were provided with a lining. Margiela left Hermès after the 2004 spring-summer collection.