Mary Quant was born in London on 11 February 1934. A self-taught designer, she cut up bedspreads to make clothes when she was only six; as a teenager, she restyled and shortened her gingham school dresses.

She recalled admiring the appearance of a child at a tapdancing class who wore a black "skinny" sweater, pleated skirt, and pantyhose with white ankle socks and black patent shoes (Quant: 1966, p. 16). From the mid-1950s she transformed styles like these into amusing and sexy clothes for young women, and paved the way for London to become a center of irreverent youth-oriented fashion.

Quant's parents would not accept her attending a school of fashion design, but compromised by allowing her to go to art school. She met Alexander Plunkett Greene while she was studying illustration at Goldsmith's College of the University of London. Plunkett Greene later became her business partner and husband. After leaving art school, Quant was apprenticed to Erik of Brook Street, a Danish milliner working in London. In 1955 Quant's husband purchased Markham House in London's King's Road to start a shop named Bazaar, and open a restaurant called Alexander's in the basement. Mary was responsible for buying the stock for Bazaar, Alexander for sales and marketing, while Archie McNair, an exsolicitor who ran a photography business, handled the legal and commercial side of the business. Quant designed a black five-petaled daisy logo during this period; it eventually became her worldwide trademark.

Quant sourced innovative jewelry from art students and bought clothes from various wholesalers to stock the boutique. One of the items designed for Bazaar's opening was a pair of "mad" house-pajamas, which were featured in Harper's Bazaar and purchased by an American manufacturer to copy. Encouraged by her success as well as dissatisfied with the styles on the market, Quant decided to design her own stock. After attending a few evening classes on cutting, she adjusted some Butterick patterns to achieve the look she wanted. Quant was designing for Butterick by 1964; some of her pattern designs sold over 70,000 copies. Each day's sales at Bazaar paid for the cloth made up that evening into the next day's stock. As business took off, Quant employed a dressmaker to help her, and then another, and another, and so on. 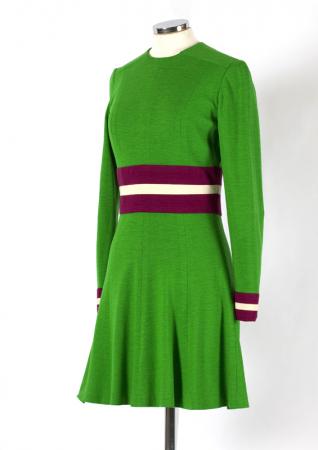 Quant brought a groundbreaking approach to fashion retailing by providing an informal shopping experience. In contrast to traditional fashion retail outlets, which ranged from high-class couturiers through staid town-center department stores and chain stores such as C and A Modes to High Street dress shops, Bazaar set out to make shopping for clothes enjoyable: loud music played, wine flowed, and the boutique stayed open until late in the evening. Most importantly, the stock was constantly replenished with new and highly desirable designs. "The clothes were very simple. Basically tunic dresses, and very easy to wear, unlike the couturier clothes which were very structured. And put together with other things-tights and knickers in ginger and prune and a grapey colour, that people weren't used to" (Harris, 1994). Quant persuaded theatrical costume manufacturers to make the tights she sold, as there were no panty-hose in the color that Quant required on the market. While Quant's prices were reasonable in comparison to those of the traditional fashion houses, her clothes were made to a high standard-many were silk-lined-and were not cheap.

Quant was probably the first designer to acknowledge the influence of youth subcultures, and she credits the Mods as an important source of inspiration. Mods were a sub-cultural youth group characterized by their immaculate dress-their 'sharp' tailoring and love of Italian sportswear, and the parka coat that they wore to protect their clothes whilst traveling by scooter. One of her most successful early designs was a white plastic collar to be added to a sweater or dress. One of Quant's trademark innovations was the mini skirt: by 1960 her hemlines were above the knee and crept up the leg to reach thigh level by the mid-1960s. She also derived inspiration from school uniforms and menswear, especially traditional country clothes-knickerbockers, Norfolk jackets, "granddaddy" tab-collared shirts, Liberty bodices or combinations (one-piece garments), and traditional children's underwear. Quant undertook much of her research at London's Victoria and Albert Museum. She bought her fabrics, notably Prince of Wales checks and herringbone weaves, from Harrod's, and persuaded knitwear manufacturers to make their men's cardigans 25 centimeters longer so that they could be worn as dresses. Whereas fashion designers had traditionally looked to Paris for stylistic guidance, Quant and her husband watched youth programs on television and attended fashionable London nightspots to identify new trends.

One example of Quant's work from 1956/57 was a dress in black-and-white checked wool cut in a sleeveless balloon style and teamed with a skinny-rib black sweater. For the winter of 1957/58 Quant designed an ensemble comprised of a rust-red Norfolk-style jacket, Harris tweed knickerbockers-she favored knickerbockers-, and a pinafore dress. Another pinafore of the same year, made of striped menswear suiting, featured two bold pockets at the bust. Her popular hipster pants were based on the styles that her husband had the fashionable tailor Dougie Hayward make for him. Quant was the first designer to use Polu-Vinyl-Chloride (PVC) in fashion; the first to introduce pantyhose in stunning colors to match her knitwear; and the first to introduce "fashion" lingerie-her seamless brassieres were called "booby traps," and her uplifting brassieres "bacon savers."

Quant also exerted a profound influence upon the representation of fashion by designing and commissioning young-looking animated mannequins and staging witty window displays. In her 1966 autobiography, she recalled one display in which "we had all the figures in bathing suits made of Banlon stretch fabric with madly wide coloured stripes like rugger sweat shirts. … The models were sprayed completely white with bald heads" (p. 8). In 1957 the trio (Mary, Alexander, and Archie) opened a second branch of Bazaar, designed by their friend Terence Conran, in London's Knightsbridge neighborhood. At the launch party, Quant's models danced to loud jazz music with glasses of champagne in their hands, "and floated around as if they had been to the wildest party or looking dreamily intellectual with a copy of Karl Marx or Engels in the other hand. … No one had ever used this style of showing. … At the end, the place just exploded!" (Quant, 1966, p. 95). 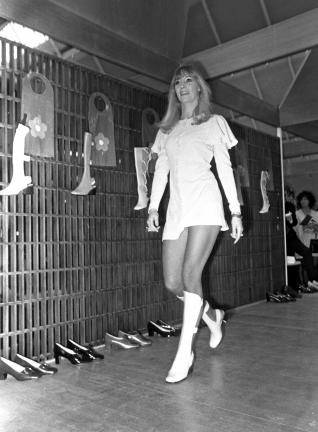 In 1962 Quant entered into a lucrative design contract with J. C. Penney, which had 1,700 retail outlets across the United States; and in 1963 she launched her own cheaper diffusion line, called the Ginger Group. Her talent was acknowledged that same year by the Sunday Times, which gave her its International Award for "jolting England out of its conventional attitude towards clothes" (Quant, 1966, p. 96). In 1966 she was awarded the Order of the British Empire and in 1967 she won the Annual Design Medal of the Royal Society of Arts. In the same year she opened her third shop, designed by Jon Bannenberg, in London's New Bond Street. Quant was awarded the Hall of Fame Award for Outstanding Contribution to British Fashion by the British Fashion Council in 1969.

Quant remained in fashion's vanguard throughout the first half of the 1970s. In 1971 she designed a spotted summer playsuit in cotton jersey called "Babygro," named after the ubiquitous babies' romper suits, and a long flared skirt printed with dots and daisies called "Sauce," which was teamed with a matching "Radish" bra-top. Summer evening dresses with plunging necklines, puffed sleeves, and ruffled skirts were made in pretty Liberty floral prints-once again borrowed from childrenswear-and glamorous striped Lurex. Quant's sporty styles for 1975 included brightly colored and striped jumpsuits, many with drawstring waists and ankle ties, and sailor-inspired slit-sided tunic dresses worn over pants. In 1978 she introduced her own range of childrenswear. She has also designed furnishings and bed linens since the 1980s, and won numerous awards for her carpet designs.

Mary Quant always wanted to create a total fashion look-her own geometric hairstyle, cut by Vidal Sassoon, was widely copied. As an art student she had used Caran d'Ache crayons and a box of watercolors for her own makeup. In 1966 she startled the cosmetics industry by offering makeup in a staggering choice of wild colors as well as a more natural palette. The range was advertised using top model Penelope Tree, and photographed by Richard Avedon. Her book Colour by Quant was published in 1984, followed by Quant on Make-Up in 1986, and the Classic Make-Up and Beauty Book in 1996.

In 1990 Quant was awarded the British Council's Award for Contribution to British Industry, and in 1993 she became a Fellow of the Society of Industrial Artists and Designers. Her cosmetics business is thriving as of the early 2000s; she has over 200 shops in Japan as well as outlets in London, Paris, and New York City.

--. Quant by Quant. London: Cassell and Company, Ltd., 1966. An entertaining and informative autobiographical insight into London's postwar youth scene and the rise of Quant's fashion empire.