Madame Demorest (1824-1898) created one of the most important and influential fashion empires in the late nineteenth century. She was born Ellen Louise Curtis in Schuylerville, New York, on 15 November 1824. After graduating from Schuylerville Academy at the age of eighteen, Ellen moved to Saratoga Springs, where she opened a millinery shop with the financial help of her father, a hat factory owner. She apparently achieved some success and decided to move to New York City with her business. There she met a widower, William Jennings Demorest, a dry goods merchant who had recently opened Madame Demorest's Emporium of Fashion on Broadway. Ellen Curtis and William Demorest married in 1858. A perfect embodiment of the new Madame Demorest's Emporium, Ellen was pivotal to the expansion and diversification of her husband's business and became one of the most influential arbiters of fashion of her era.

Madame Demorest's entrepreneurial success can be attributed to her astute understanding of the American fashion business as a combination of creativity, marketing, distribution, and brand identity. She claimed a number of innovative products, including a line of comfortable corsets, an affordable hoopskirt, the Imperial Dress-elevators (loop fasteners enabling skirts to be raised), and a sewing machine that could sew backwards; moreover, she developed the Excelsior Dress Model drafting system, a tool for making dress patterns. However, her mass-produced and marketed paper dress patterns remain her most important contribution. Madame Demorest's foray into paper patterns came at a time of great social change, when a growing middle class was clamoring for access to affordable fashions and technical advances like the sewing machine were becoming increasingly common in the home, making these fashion ambitions possible. Madame Demorest's paper patterns reached women across America and Europe, bringing them up-to-date fashions, a feat of no little importance.

A Madame Demorest tissue-paper pattern for a boy's jacket was advertised in Frank Leslie's Ladies Gazette as early as March 1854. These early patterns were unsized and sold for twenty-five to fifty cents. Starting first with children's garments, Demorest moved to women's dress. The aim was to sell patterns for separate garments- bodices, sleeves, mantles, basques-that could be used in combination with others. Madame Demorest later made custom patterns by special order available. It was not until the early 1870s (nearly a decade after her archrival Ebenezer Butterick) that Madame Demorest was mass-producing sized patterns. The business burgeoned into an international enterprise within a few short years. In 1876 Madame Demorest sold over 3 million paper patterns throughout America and Europe. 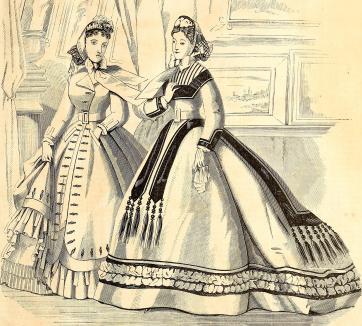 In addition to marketing through the magazines, the paper patterns were sold through a nationwide network of shops called "Madame Demorest's Magasins des Modes." In the mid-1870s there were 300 shops employing 1,500 (mainly women) sales agents. In addition to the paper patterns, the Excelsior drafting system was also showcased and sold at these satellite stores, which were located in major cities in the United States, Canada, Europe, and Cuba.

Madame Demorest continued to use the flagship Emporium store on Broadway to merchandise the full array of Demorest products. In the earliest years, Madame Demorest's Emporium of Fashion was located at 375 Broadway near Lord and Taylor and Brooks Brothers; then the business was moved to 473 Broadway in 1860. In 1874 the Emporium moved farther uptown, to 17 East Fourteenth Street, and catered to an increasingly fashionable set. The Emporium provided custom dressmaking services to wealthy clients, as well as ready-made accessories and undergarments; Demorest's unique line of cosmetics and perfumes; and, of course, the monthly magazines and paper patterns. Although it was only a small part of their overall business, the custom dressmaking service at the Emporium lent prestige and luxury to their name, a marketing tool that Madame Demorest was savvy enough to harness.

Madame Demorest's participation in numerous national and international exhibitions cemented her reputation as a fashion arbiter. A frequent exhibitor at London and Paris shows, she is noted as having created a large display at the Philadelphia Centennial Exhibition in 1876 in which she installed several women's and children's fashions; her drafting tool, "Dress Model"; and a huge case filled with paper patterns.

In the 1880s Madame Demorest's fashion empire began to decline. Unlike her competitor Ebenezer Butterick, Madame Demorest had never filed patents for her paper patterns and eventually lost out in this arena. The paper pattern business was sold in 1887. In later years both Ellen and her husband, William, turned their attention to social causes that had always been of interest to them. William was deeply committed to the temperance cause, which often found expression in the pages of the Demorest Monthly magazine. Ellen increasingly supported women's causes. Both Demorests were strong advocates of abolition and deserve particular recognition for their unusually progressive business policy of hiring African American women agents who were treated equally with their white employees, sharing workplaces and receiving equal pay.

One of Madame Demorest's most newsworthy custom dressmaking projects was the wedding trousseau she designed for Mrs. Charles Stratton, née Miss Lavinia Warren, in 1863. The Strattons were better known at the time as General and Mrs. Tom Thumb, midgets who toured with P. T. Barnum's circus. After their wedding in New York City, which was attended by 2,000 people, Mr. and Mrs. Stratton headed to Europe on a world tour that included reception at several royal households. The Madame Demorest reception dresses, worn by Mrs. Stratton at these functions, were widely publicized.

At the height of her career in the 1870s, Madame Demorest could rightly claim to be one of the most influential fashion disseminators of her era. Her paper patterns and fashion magazines reached millions of women in America and Europe, bringing sophisticated yet affordable fashions to the masses. At the same time, Madame Demorest created brand identity through her innovatively named lines of accessories and cosmetic products, while burnishing her reputation for quality through her luxury dressmaking establishment. While it could be said that she appeared at the right place at the right time when a population of women had the inclination and means, via the sewing machine, to make fashions at home, Madame Demorest was singularly astute in her comprehension of women's fashion needs and her ability to market to them through the widely read Demorest publications.