Madame Alix Grès is widely regarded as one of the most brilliant couturiers of the twentieth century. She employed innovative construction techniques in the service of a classical aesthetic, creating her hallmark "Grecian" gowns as well as a wide range of simple and geometrically cut designs based on ethnic costume. Her garments are noted for their three-dimensional, sculptural quality.

Mme. Grès's life, like the creation of her gowns, was unconventional. Born Germaine Emilie Krebs on 30 November 1903 in Paris, France, she became a couturier after her bourgeois Catholic parents discouraged her desire to pursue a career first as a professional dancer and then as a sculptor. Around 1933, during a brief apprenticeship of three months at the couture house of Premet, she learned the basics of dressmaking and changed her first name to Alix. That same period she began to work for a couturier named Julie Barton, who renamed her house Alix to reflect the astounding success of her assistant.

On 15 April 1937 Grès married a Russian-born painter, Serge Anatolievitch Czerefkow. It was then that she became Alix Grès, Grès being an anagram of her husband's first name, which he used to sign his paintings. In August 1939 their only child, Anne, was born. Months earlier, however, Serge had left France and relocated to Tahiti.

In the spring of 1940 the Nazis occupied Paris. After a falling out with Barton, Grès fled the city, like many other Parisians, and moved south with her infant daughter. The one enduring legacy of her exile was the donning of a turban; she took to wearing the headdress initially because she could not go to a hairdresser. It became her personal trademark.

In 1941 Grès returned to Paris and opened her own salon. After refusing to accommodate the Nazi's insistence that she reveal her trade secrets and adhere to the regime's fabric restrictions, she was forced to close the shop in January 1944. Finally, in the early summer of 1944, she was authorized to resume her business in time to show a final collection before the liberation of Paris. This now legendary group of garments was made using only the red, white, and blue of the French flag.

The most famous and recognizable design of Mme. Grès was her classically inspired floor-length, pleated gown. In the 1930s these "Grecian" garments were primarily white in color, made from uncut lengths of double-width matte silk jersey, most often sleeveless, and cut to enhance the female body without physically restricting its movement. By the onset of World War II, because of textile restrictions, Grès focused on the manipulation of the bodices, sleeves, and necklines of much shorter garments.

In the late 1940s Grès resumed the use of larger quantities of fabric as well as a tighter and finer style of pleating. She also employed inner reinforcement or corseting. By the 1970s Grès has eliminated the corset and, simultaneously, cut away portions of the bodice, thus exposing large areas of the nude torso.

In the 1950s and 1960s Mme. Grès's business and her designs thrived. She engaged in several licensing agreements, the most successful of which was her perfume, Cabochard, released in 1959. Literally meaning "pigheaded," it describes the tenacity of the couturier. Madame Grès's ethnic-inspired garments were an important part of her oeuvre during this time. Non-Western art was a major source of inspiration to her beginning in the 1930s, with the proliferation of exhibitions and expositions that displayed the products of France's colonies. Although her output of such garments was to drop off significantly during the 1940s and 1950s, she responded to a strong revival of ethnic influences during the mid-1960s, creating caftans, capes, and pajamas for "couture hippies." These gowns were different from her prewar creations in that Grès relied on construction techniques she observed in non-Western dress. This change occurred after a 1959 trip to India, where Grès studied ethnic costume and took note of Eastern cultures' aversion to the cutting of textiles. She also experimented with fabrics, using faille and brocaded silks as well as more pliable materials such as fine wool knits and djersakasha, a cashmere jersey that could be woven as a tube, eliminating the need for seams.

In 1972 Mme. Grès was unanimously elected president of the Chambre Syndicale de la Couture. Four years later she became the first recipient of the Dé d'Or (Golden Thimble award), the highest honor given by the Chambre Syndicale. By the mid-1980s, however, the house of Grès had fallen into decline. After entrusting both her business and her trademark to a businessman-cum-politician named Bernard Tapie, Grès lost both. In April 1986 Maison Grès was expelled from the Chambre Syndicale for nonpayment of dues. Difficulties continued until the official retirement of Madame Grès, after the presentation of her 1988 spring/summer collection. The exit of one of the greatest figures in the world of haute couture took place quietly, with no official press release from the house of Grès. She died in the south of France on 13 December 1994. 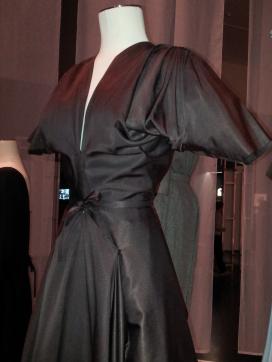 No figure in French couture used the elements of classicism so completely or so poetically as Madame Grès, who used this aesthetic in her creation of seemingly limitless construction variations on a theme. Often referred to as the great "sculptress" of haute couture, Grès used the draping method to create her most dramatic designs, often consisting of puffed, molded, and three-dimensionally shaped elements that billowed and fell away from the body. Examples included capes made with yards of heavy wool manipulated into deep folds, taffeta cocktail dresses that combine finely pleated bodices balanced with full balloon-shaped skirts puffed sleeves, and evening gowns with enormous circular sleeves and trains that could rise like sails. Although volumetric, her sculpted garments are supple and pliable and have no reinforcement such as an attached inner facing. The end result was sensual fashions that stood away from the body rather than falling next to it.