British designer Raymond (Ossie) Clark (1942-1996) was born on 9 June 1942 in Liverpool, England. He was known by his nickname Ossie, after Oswaldtwistle, the Lancashire village to which the family was evacuated during World War II. Clark started making clothes at the age of ten for his niece and nephew. Although he was not regarded as academically promising-he went to a secondary modern school where he learned building skills-he began to draw and developed a love of glamour and beauty, encouraged by his art teacher and mentor, who lent him copies of Vogue and Harper's Bazaar. For Clark, Diana Vreeland was always "top dog." 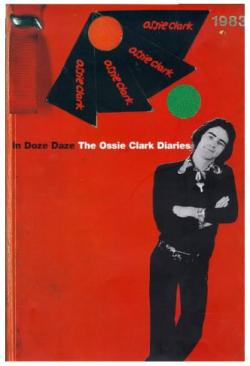 Clark's copies of fashion pictures and ballet dancers showed skill. In 1958 he enrolled at the Regional College of Art in Manchester, where he was the only male student in the fashion course. The college emphasized technical training, so that Clark learned pattern cutting, construction, tailoring, and glove making-skills in which he excelled and which formed the basis of his distinctive style. In 1959 he saw a Pierre Cardin collection in Paris; he was struck by chiffon "peacock" dresses cut in what he described as a "spiral line," which influenced his later work. In 1960 Clark became friends with Celia Birtwell, who was studying textile design at Salford College, and with the artist Mo McDermott, through whom he met David Hockney in 1961. Clark began a postgraduate course in fashion design at the Royal College of Art in London in 1962, under the aegis of Professor Janey Ironside.

The Royal College of Art produced not only such leading artists as Peter Blake and David Hockney, but also fashion designers who became well known in their own right: Janice Wainwright, Marian Foale, Sally Tuffin, Leslie Poole, Bill Gibb, Zandra Rhodes, and Anthony Price. Textile designer Bernard Nevill taught the students the history of fashion, taking them to the Victoria and Albert Museum, where they observed the collections, particularly those of clothing from the 1920s and 1930s. The students were introduced to the Gazette du bon ton, and Neville had them produce illustrations in the styles of George Georges Barbier Lepape, and other artists of the period. Clark became an admirer of Madeleine Vionnet and Charles James; both designers influenced him, as did Adrian, who had designed the costumes for the film version of The Women (1939). "Bernard Nevill … opened all the students' eyes to the fact that fashion wasn't about rejecting what your parents stood for … . the glamour of the thirties and the satin bias; we thought, why can't people on the street wear them?"

Clark graduated from the Royal College in 1965, the only student in his class to complete the course with distinction. He was photographed by David Bailey for Vogue, with the model Chrissie Shrimpton wearing his Robert Indiana op art-print dress. His degree collection was sold at the Woollands 21 boutique; he also began designing for Alice Pollock, part owner of the boutique Quorum in Kensington, close to Barbara Hulanicki's Biba and the Kings Road. Quorum quickly became part of "the most exciting city in the world," as described by writer John Crosby in a 1965 article that discussed youth, talent, and sexual freedom in "swinging London." The new post-Profumo society had a Labour government; unemployment was low, exports were high, and young working women were wearing Mary Quant's miniskirts. Clark and Pollock articulated the new freedom through their clothes. In 1966 Clark's Hoopla dress, a short shift cut to fit without darts and influenced by John Kloss, was featured in Vogue.

In 1967 Clark's Rocker jackets and culottes defined the look of "Chelsea Girls" like Patti Harrison, Anita Pallenberg, Marianne Faithfull, Amanda Lear, and Jane Rainey, who was married to Michael Rainey, the proprietor of the Kings Road boutique Hung On You. All were friends for whom Clark made clothes. At this time Alice Pollock suggested to Celia Birtwell that she should design fabrics for Quorum, especially for Clark's styles. Birtwell's floral patterns were influenced in color and design by the work of the Russian artist Leon Bakst as well as by flowers, naturalistic early imagery from manuscripts, and the textiles from collections at the Victoria and Albert Museum, consisting of printed silk chiffon, marrocain crepes, and velvets. Birtwell's fabrics were discharge-printed at Ivo Printers, and used to create such dresses as "Acapulco Gold" or "Ouidjita Banana." Clark cut chiffons and crepes on the straight and turned them to fit the body on the bias, to form the "spiral line" that he had seen at Cardin's show. He also experimented with alternatives to zippers, in particular ties or numerous covered buttons. His versatility in the period from 1967 to 1968 was best illustrated by his use of a range of materials as well as by the clothes themselves. Clark made use of snakeskin and leather as well as chiffon, satin, crepe, tweed, and furs. In 1967, the year in which the film Bonnie and Clyde was released and marked a return to nostalgia in fashion, Clark dropped his hemlines, shifting the focus to the wearer's bosom and shoulders, back, or waist to "find a new permutation and erogenous zones," he said. In 1968 Vogue featured his tailored redingote in a new "maxi" length. At the end of the same year he launched his "Nude Look," transparent chiffon dresses worn with little or no underwear. His couture pieces, made for such friends as Kari-Anne Jagger, had small hidden pockets, just big enough to hold a key and a five- pound note to pay the cab fare home. At the same time, a Clark menswear range was launched, which included ruffled shirts and printed chiffon scarves that were worn by the Rolling Stones, David Hockney, and Jimi Hendrix. 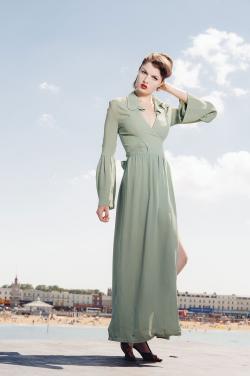 Both Quorum and the Ossie Clark name were sold to a middle-market company, Radley Gowns, in 1968. There were now three Clark lines: a couture line, Ossie Clark for Quorum, and Ossie Clark for Radley-which retailed at an accessible price not only at Quorum, which had relocated to the Kings Road, but also at other boutiques and department stores. In 1969 Clark and Birtwell were married when she became pregnant with their first child. Prudence Glyn, the fashion editor of The Times, chose a nude-look ruffled top and matching satin trousers made in Birtwell's trefoil print as the dress of the year for the Museum of Costume in Bath. "Ossie Clark is I believe in the world class for talent; in fact I think that we should build a completely modern idea of British high fashion around him," she wrote. Clark's contemporary Leslie Poole argued his importance at this point in his career: "He liberated women by constructing the low neckline with a bib front, tied at the back that could fit anybody. He borrowed lots of things like pointy sleeves and bias cut, but he effectively altered fashion through this new construction."

In 1970 Clark was invited to design a ready-to-wear collection by the French manufacturer Mendes, to be distributed in France and the United States. It was launched at the musée du Louvre on 22 April 1971 to high acclaim. Clark's collection featured top-quality chiffons, velvets, and silks, cut into frills and parachute pleats, 1940s-in- spired panels and plunging necklines, floating shapes and tightly tailored wools. He produced one collection, for reasons still unclear, but continued to show and work in London, dressing Mick Jagger in jumpsuits based on anatomical drawings by Leonardo da Vinci, and making trouser suits for Bianca Jagger. David Hockney's portrait Mr and Mrs Clark and Percy (1970-1971) commemorated one of the most famous couples in fashionable London- and their pet cat.

Clark's early success did not last. In 1974 he separated from business partner Alice Pollock, and was divorced by Birtwell, who had grown tired of his affairs with men. In October 1974, Clark was the featured speaker at a fashion forum at the Institute of Contemporary Arts in London; he discussed marketing opportunities for the future on that occasion while admitting that he was living the lifestyle of a rock star. Unfortunately his work became disjointed by depression and alcohol abuse in the mid-1970s and appeared in magazines only intermittently. A relaunch in 1977 was not a success because Clark's clothes were not in touch with the London of Vivienne Westwood and punk style. Clark had little business sense, and declared bankruptcy in 1981. Shortly before his death however, he had started to make clothes again. Clark was stabbed to death in October 1996 by a former lover, Diego Cogolato. Designers working today influenced by Clark include Anna Sui, John Galliano, Christian Lacroix, Dries van Noten, Marc Jacobs and Clements Ribeiro.

Ossie Clark. Recording of Ossie Clark at the Institute of Contemporary Arts, 16 October 1974, possession of this writer and with thanks to Ted Polhemus, host of the event.

--. Recording of Ossie Clark lecture at the Royal College of Art, 1996, courtesy of Dr. Susannah Handley and the RCA.

Green, Jonathon. All Dressed Up: The Sixties and the Counterculture. London: Jonathan Cape, 1998.