Paco Rabanne (1934-) was born Francisco Rabaneda y Cuervo in Pasagès de San Pedro in the Basque region of Spain. His family fled to France in 1939 after his father was captured and executed by Francisco Franco's troops. Rabanne studied architecture at the École nationale supérieure des Beaux-arts in Paris from 1951 to 1963. In 1963 he won an award at the Biennale de Paris for an inhabitable garden sculpture, which was exhibited at the Musée d'art moderne de la ville de Paris.

Rabanne's drawing skills made it possible for him to enter the world of fashion as early as 1955; indeed, to finance his architecture studies, he regularly supplied drawings of handbags for Roger Model and shoes for Charles Jourdan until 1963. In 1959 Women's Wear Daily published seven sketches of dresses signed "Franck Rabanne." Though this was the first time the designer's name appeared in public, he chose "Franck" because the number of letters in the first and last names totaled a lucky thirteen. (He did not begin using the name Paco professionally until 1965.) These dresses bore the imprint of the style of Balenciaga, whose work was familiar to the young Rabanne through his mother, a former chief seamstress in the master's workshop in San Sebastián in Spain.

Rabanne put his artistic gifts and the skills of his family to good use between 1962 and 1966: together they hand-produced unusual buttons and embroideries for the houses of haute couture. His clients at the time included Nina Ricci, Cristóbal Balenciaga, Maggy Rouff, Philippe Venet, Pierre Cardin, and Hubert de Givenchy.

In 1965, Rabanne's creation of oversized rhodoïd jewelry in various geometric forms and bright colors brought him his first major commercial and media success. It also established one of the principles of his style: the use of rigid divisible materials held together by metallic rings or rivets.

Paco Rabanne's first show took place on 1 February 1966 at the Hotel George V. This collection, which the designer called "Twelve Unwearable Dresses in Contemporary Materials," was worn by barefoot models parading to the sounds of Pierre Boulez's Le marteau sans maître, which Rabanne chose to reflect modernity and to shock the audience. It was a veritable fashion manifesto and helped to establish Rabanne's reputation as a revolutionary. On 21 April 1966, the dancers of the celebrated Parisian cabaret, the Crazy Horse Saloon, presented Rabanne's collection of beachwear made of rhodoïd disks or leather. The dancers modeled the unconventional clothes in the form of a strip tease, creating another scandal. Rabanne also set up his workshop in 1966 at 33, rue Bergère, with a black décor accented with industrial scaffolding and bicycle seats for chairs.

Following the example of contemporary artists who had given up the traditional media of paint and canvas, Paco Rabanne chose to base his fashion experiments on a systematic challenge to the art of cutting and sewing. His work was characterized from the beginning by a complete rejection of traditional couture techniques in favor of the exploration of unusual materials and methods of assemblage. 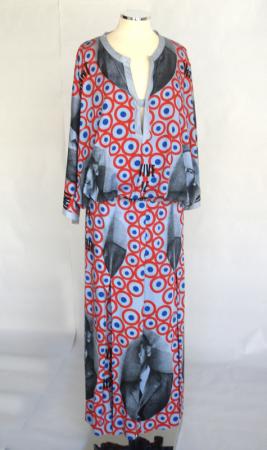 Rabanne followed up his experiments in rhodoïd with garments made of metal, making metal something of a distinctive signature. He used it from one collection to the next in all its forms: disks and rectangles normally used to make protective aprons for butchers, coats of mail, hammered plates, aluminum jerseys, or elements of jewelry or decoration used as modified ready-mades. This work led Coco Chanel to call him "the metal worker." Rabanne readily acknowledged that the recycling of ready-mades was very much in the tradition of the dadaists, such as his acknowledged master Marcel Duchamp.

He experimented with other materials, whether previously unknown to fashion or reimagined and redirected from their original purposes. Among Rabanne's most notable creations were: paper dresses, which were presented in his collections in 1967, 1988, and 1992; molded clothing known by the name of the patented Giffo process, in which all the individual parts, including the buttons and pockets, were molded in a single block (1968); designs made from knitted fur (1967); and several made entirely of buttons (1970), wood (1977), coconuts (1993), or laser discs (1988). Far from being incidental, these experiments were developed according to a rigorous artistic and ideological perspective. In the process, they helped to free the art of clothing design from its strictly utilitarian context, and they inspired many other designers to adopt their current positions.

The innovative and nonconformist character of Rabanne's work was recognized in avant-garde artistic circles. The gallery owner Iris Clert exhibited Paco Rabanne's creations in 1966 among those of other artists she supported, like Lucio Fontana. Salvador Dalí referred to his young compatriot as the second Spanish genius for his Unwearable Dresses collection. Rabanne's clothes also appealed to such 1960s icons as Brigitte Bardot and Françoise Hardy. It was also in this period that the cinema made the most frequent use of his dresses, so singular in appearance and so photogenic.

In the 1960s and 1970s Rabanne was in great demand as a costume designer for theatrical productions and ballets as well as films. His many noteworthy contributions to the cinema include: Two or Three Things I Know About Her, directed by Jean-Luc Godard (1967); The Adventurers (Les aventuriers) also known as "The Last Adventure," directed by Robert Enrico (1967); Two for the Road, directed by Stanley Donen (1967); Casino Royale, directed by John Huston (1967); and Barbarella, directed by Roger Vadim (1968).

In addition to Rabanne's work in costume design, he produced a series of sophisticated perfumes. Calandre, launched in 1969 by the Spanish company Puig (which bought out Paco Rabanne in 1986), has proven to be one of the most successful contemporary fragrances. Subsequent fragrances have sold well also. Rabanne's perfumes, as well as his numerous licenses for other products around the world, have made it possible for the designer to continue his fashion experiments without suffering unduly from the low profit margins of haute couture.

In 1999, Rabanne decided to put an end to haute couture activity, while the ready-to-wear sector that he had developed since 1990 experienced new growth, particularly with the arrival in 2000 of Rosemary Rodriguez as the head of Rabanne's creative studio. Rodriguez has developed several collections in harmony with the very particular stylistic grammar of Paco Rabanne.

On the occasion of Rabanne's thirtieth anniversary as a designer, the first retrospective exhibition of his fashions was presented in 1995 at the Musée de la Mode in Marseille, followed in 1996 by the bilingual publication of the first monograph devoted to his work.

Paco Rabanne has been involved since the late 1980s in several artistic projects beyond the confines of fashion, including the production of Mira Nair's film Salaam, Bombay! The film was awarded the Caméra d'Or at the Festival de Cannes in 1988.

In 1991 Rabanne published his first book, Trajectoire. He has since written several other works of reflection on mystical subjects and practices.