During the last half of the twentieth century, Pierre Cardin (1922-) became a prominent and widely admired designer as well as a highly successful businessman. Cardin is known for his acute intuition, which often made him a trendsetter and design leader. Cardin has expanded his design operations far beyond fashions for both men and women to encompass all aspects of modern living. The name Cardin has become synonymous with his brand as he has expanded his commercial operations through timely licensing. As of the early 2000s, Cardin's corporate empire held 900 licenses for production in 140 countries.

Born in Italy of French parents on 2 July 1922, the designer was originally named Pietro Cardini. After several years in Venice, however, his family relocated to France. As a young man Cardin briefly studied architecture before joining the house of Paquin in 1945. His tenure there gave him the opportunity of working with Christian Bérard and Jean Cocteau on the 1946 film La Belle et la bête, for which he created the velvet costume for the Beast, played by Jean Marais. After a brief stint with Elsa Schiaparelli, Cardin worked under the auspices of Christian Dior from 1946 until he went out on his own in 1950. Cardin honed his superb tailoring skills heading up Dior's coat and suit workroom. Cardin's own business was first located on the rue Richepanse (renamed rue du Chevalier de Saint-George), but later moved to the famed rue du Faubourg Saint-Honoré, where the designer launched his first couture collection in 1953. In 1954 Cardin opened a boutique called Eve, followed by Adam for men in 1957.

From the beginning, Cardin showed himself to be an innovator and a rebel. He was quoted as saying, "For me, the fabric is nearly secondary. I believe first in shape, architecture, the geometry of a dress" (Lobenthal, p. 151). His experimentation with fabrics embraced geometric abstraction without losing sight of the human figure.

Cardin's ability to sculpt fabric with an architectural sensibility became his signature. Making garments with impeccable craftsmanship, Cardin possessed the skills and vision to make his dreams a wearable reality. Even during the 1970s, when his dresses shifted from a sculpted look to a more draped silhouette, the fluidity of his work remained formal. Cardin was highly successful as a couturier, but he also sought to redefine the field of fashion design commercially. For his efforts in launching a ready-to-wear line alongside his couture collection, however, Cardin's membership in the prestigious Chambre Syndicale was revoked in 1959. Cardin was soon reinstated, but voluntarily resigned from the Chambre in 1966.

Cardin's early training as a tailor's apprentice shaped his approach to fashion design for men as he matured throughout the 1950s. Cardin deconstructed the traditional business suit. He subtracted collars, cuffs, and lapels, creating one of the most compelling images of the early 1960s. This look became instantly famous when Dougie Millings, the master tailor who made stage outfits for numerous British rock musicians, dressed the Beatles in his version of matching collarless suits.

Cardin's men's wear line was housed in a separate building on the Place Beauvau by 1962. He was inspired by his travels; after seeing the traditional high-collared jacket of India and Pakistan, he distilled its form into another popular innovation in men's fashions of the 1960s, the so-called Nehru jacket. Cardin further disrupted men's customary suiting by heralding the wearing of neck scarves in place of ties, and turtlenecks instead of button-down shirts. Yet he also was capable of designing men's clothing in the classic tradition, such as the costumes worn by the character John Steed in the British television series The Avengers. 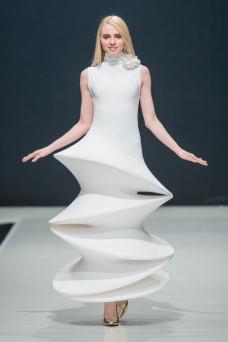 Advances in fabric production and technology during the 1960s coincided with a widespread fascination with space exploration. Cardin's Space Age or Cosmocorps collection of 1964 synthesized his streamlined, minimal dressing for both men and women. This body-skimming apparel resembling uniforms featured cutouts inspired by op art. Cardin was innovative in his use of vinyl and metal in combination with wool fabric. Not just unisex, Cardin's clothing often seemed asexual. Unlike such other fashion minimalists as Rudi Gernreich and André Courrèges, Cardin did not promote pants for women. He often used monotone-colored stockings or white patterned tights to compliment his minidresses. The "Long Longuette," which was dubbed the maxidress, was Cardin's 1970 response to the miniskirt. In 1971, Cardin obtained an exclusive agreement with a German firm to use its stretch fabric, declaring that "stretch fabrics would revolutionize fashion" (Weir, p. 5). Continuing his reputation as a trendsetter, he showed white cotton T-shirts paired with couture gowns on the runway in 1974 and introduced exaggerated shoulders in 1979.

Cardin learned much about the business side of fashion from his mentor Christian Dior. Dior had been very successful in trading on his name to license his designs internationally. Cardin took this approach further when he sought and found a global acceptance of his designs in countries as diverse as the Soviet Union, India, and Japan. Cardin was an exponent of what is now called branding long before other fashion designers followed suit. He was the first designer to sell ready-to-wear clothing in the Soviet Union as early as 1971. While Cardin's men's wear lines were ultimately more successful than his women's fashions in the United States during the 1970s, he still owned more than two hundred American retail outlets. Cardin was embraced by the Japanese market with special enthusiasm. At the peak of his expansion in 1969, Cardin boasted of having 192 factories throughout the world.

Cardin's fashion empire spanned the globe with his trademark licensing as of the early 2000s. Products identified by the Cardin brand ranged from accessories and handbags to home interiors, luxury cars, and luggage, as well as to such personal items as Fashion Tress wigs, introduced in 1973. The ubiquitous brand name was recognized around the world. As Caroline Milbank stated, "It is difficult to name something that Pierre Cardin has yet to design or transform with his imprint" (Milbank, p. 338). In 1971, Cardin transformed the former Théâtre des Ambassadeurs into L'Espace Cardin to promote new talent in performance art and fashion design. Cardin capitalized again on his fame in 1981 by purchasing Maxim's, the famous Paris restaurant, and using its name to build a worldwide chain of restaurants in the mid-1980s.

During the early 1960s, Cardin was a pioneer in designing clothing conspicuously adorned with his company's logo. This trend was picked up by many other designers from the 1970s onward. Cardin's logos, consisting of his initials or a circular bull's eye, were often three-dimensional vinyl appliqués or quilted directly into the garment. Cardin's unrestrained licensing, while symbolic of his success, may have resulted in untimely diluting his name brand image.

"The job of fashion is not just to make pretty suits or dresses, it is to change the face of the world by cut and line. It is to make another aspect of men evident."

Many fashion writers criticized Cardin for overexposure, especially given the very rapid expansion of his product lines during the 1980s and 1990s. Nevertheless, Cardin's name was known throughout the world, and identified by the public with quality and high standards. Cardin stood out as one of the most complex designers of the twentieth century because he was one of a handful who understood that fashion is above all a business. His skills as an entrepreneur, and especially his creative licensing, made Pierre Cardin one of the richest people in the fashion world. 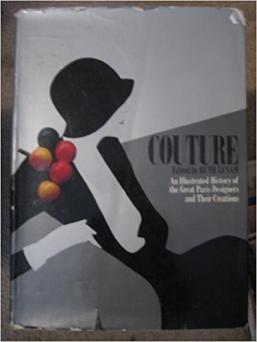