Rei Kawakubo was born in Tokyo in 1942, the daughter of a senior academic at Keio University. She studied fine art (both Japanese and Western) at Keio and, after graduating in 1964, joined the advertising department of the Japanese chemical company Asahi Kasei, which produced acrylic fabrics. From 1967 she worked as a freelance fashion stylist, but, critical of the selection of clothes available in Japan, she started designing them herself.

"I wanted to have some kind of job to earn money because at that time, having money meant being free. I never dreamt of being a fashion designer like other people. When I was young, it was just a way of earning a living by doing something I found I could do: making clothes and taking them around the shops to sell them. (Frankel, p. 8) "

By 1969 she was producing clothing under the label Comme des Garçons, and in 1973 she formed a limited company. The moniker was typically enigmatic; named after the title of a French soldier's song meaning "Like the Boys," she designed clothes that eschewed conventional sexuality.

In 1975 Kawakubo showed her first collection in Tokyo, and in 1976, in a collaboration with the architect Takao Kawasaki, who has since designed most of Comme's typically calm and austere outlets, the first Comme des Garçons shop opened in the Minami-Aoyama district. The first shop did not even have mirrors, because Kawakubo wanted women to buy clothes because of how they felt rather than the way they looked. In 1978 Kawakubo introduced the Homme line; she followed it with Tricot and Robe de Chambre in 1981 and Noir in 1987. In 1981 Kawakubo launched her first women's collection in Paris at the same time as her compatriot Yohji Yamamoto, and soon afterward she joined the Chambre Syndicale du Pret-a-Porter.

Although the West was aware of other Japanese designers, such as Kenzo Takada and Issey Miyake, who had trained in Paris and New York, Kawakubo's vision was uncompromisingly severe and challenging. Her early shows made an indelible impression on the fashion world with their monochrome palette and distressed fabrics, with exposed seams and fraying edges influenced by Japanese work wear. Rather than echoing the contours of the body, she enclosed it in oversized swathes of fabric. The voluminous, layered, asymmetrical forms were accessorized with flat footwear, and the cosmetics and hair styles seemed apocalyptic to many, but the influence of her clothes soon spread, particularly for those who were prepared to be challenged by clothing, "I think that pieces that are difficult to wear are very interesting, because if people make the effort and wear them, then they can feel a new form of energy and a certain strength. I want to give people that chance" (Petronio, pp. 154-155).

Early supporters included Joan Burstein, proprietress of Browns, who stocked Comme des Garçons beginning in 1981, and more recent enthusiasts from the art and media world include contemporary art gallery owner and collector Charles Saatchi, furniture designer Tom Dixon, chef Ruth Rogers, Lucy Ferrry (rock-star Brian Ferry's wife), the actress Miranda Richardson, the rock star Sting, and Sting's wife, Trudi Styler. Kawakubo has explored color, and her silhouettes tend to be more fitted, but her work continues to be typified by complex patternmaking and experimentation with natural and man-made textiles. For those uncomfortable with overt sexuality in fashion and intrigued by her cerebral approach to material and form, Kawakubo's work offers an alternative aesthetic language to mainstream Western fashion. Kawakubo's clothes are architectonic, concentrating on structure rather than surface. A black pullover with holes in it in the Victoria and Albert Museum's collection of 1982 is an essay on deconstruction of form and the contained chaos that it inhabits. 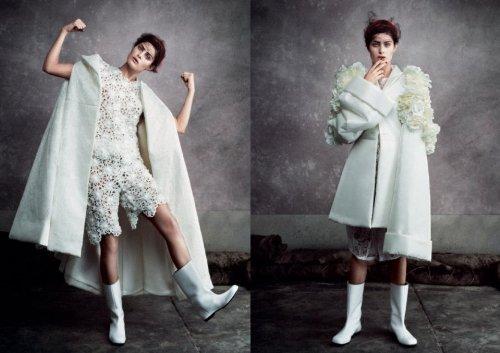 Kawakubo's aesthetic vision extends beyond clothes to embrace every facet of her company, giving consistency to her image all around the world. The controlled presentation of her clothes within the architecture of her shops includes photography, graphics, and packaging. She explains, "Everything that I do or that is seen as the result of Comme des Garçon's work is the same. They are all different ways of expressing the same shared values, from a collection to a museum, a shop or even a perfume" (Petronio, pp. 154-155). (Rather than having a name, each fragrance is simply numbered, based on its chemical components, and then vacuum packed like coffee in a plastic sachet.) Kawakubo's innovative graphics have been evident from early on in her career in a series of photographic catalogs of the collections and numerous brochures, posters, greetings, and announcement cards.

In 1988 she launched the biannual magazine Six, which is characterized by having little text, for Kawakubo prefers the images to speak for themselves. Six mixes images of clothes with portraits, photographic features, and shots of things that she finds beautiful, such as wildflowers growing beside a road or plastic sheeting flapping in the wind. This aesthetic was emulated in the photographic essay she designed for the exhibition catalog of the Victoria and Albert Museum's exhibition Radical Fashion (2001).

Kawakubo's creativity has extended to many events and collaborations, from museum and gallery exhibitions to performances to collaborations with architects, photographers, graphic designers, and even a floral artist. She has worked with the artists Cindy Sherman and Jean-Pierre Raynaud, and in 1997 she designed the set and costumes for Merce Cunningham's work Scenario, performed at the Brooklyn Academy of Music and the Palais Garnier in Paris. Kawakubo said that fashion and modern dance are

"really the same. With a collection presentation, I think about the total concept, the environment, the lighting and the make-up as well as the clothes. And the pressure to create something new and beautiful is similarly the same. Of course, the added dimension is the dancers' movements which was the risk. When I saw the rehearsal for the first time, I was fascinated how the shapes changed and came alive with the movements of the dancers. (Johnson, p. 49) "

The designs for Scenario derived from Kawakubo's spring 1997 collection, Body Becomes Dress, Dress Becomes Body, in which she used feather padding to produce bulges under the clothes, an effect that altered the natural silhouette of the body. Kawakubo said, "It is always stimulating to do new things. The goal of my work for 'Scenario' is the same as my goal for everything: to create something strong, and beautiful and new" (Johnson, pp. 48-53).

Although Kawakubo's clothes are typified by an independence from mainstream fashion, the collections often obliquely reflect current styles. For example, she included strips of camouflage (which was fashionable at the time) in her Optical Shock collection of 2001. Her autumn- winter 2002 collection parodied overtly provocative clothing with large, tulle, 1950s skirts and bras with squashed-in cups worn on top of jackets or even slung around the posterior, while the back seams of billowing trousers gaped open to reveal an arc of flesh. This was really modern erotica. She remarked,

"What I would love to transmit and tell people isn't so much in my working method or creative approach, but more in the values in which I believe. It wouldn't be interesting if everyone wore the same clothes or worked the same ways. I would want to convince people to be courageous and try things differently. (Petronio, pp. 154-155) "

Kawakubo's spring-summer 2004 collection featured skirt after skirt shaped like inverted flowers, teamed with a simple gauze top over bared breasts, radical because of its insistence on presenting only one form. The effect was to make the viewer focus on the variations on form and cloth, which varied from beige cotton to bright, bold patterns, completed with tricorn fabric headgear. Kawakubo described the collection as abstract excellence. Suzy Menkes described it as "an expression of artistry, imagination and a certain sweet elegance. And it represented the power of Paris to accommodate ideology in the industry." 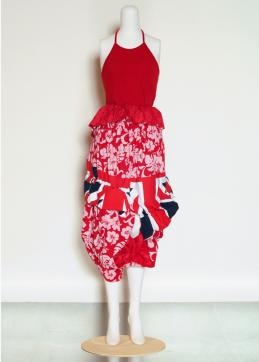 Kawakubo has received many honors in recognition of her achievements. They include the following: Night of the Stars award from the Fashion Group, New York (1986); the Mainichi Newspaper award (1988); the Business Woman of the Year award from Veuve Clicquot (1991); and Chevalier de l'Ordre des arts et des lettres, awarded by the French Ministry of Culture (1993). In 1997 she received an honorary doctorate from the Royal College of Art, London, and in 2000, the Excellence in Design Award from the Harvard University Graduate School of Design, Cambridge, Massachusetts. Her work has also been celebrated in many museum and gallery exhibitions, such as Mode et photo, an exhibition of Comme des Garçons photography at the Centre Georges Pompidou, Paris (1986), and Three Voices: Franco Albini, Kris Ruhs, Rei Kawakubo, Paris (1993). She has had a furniture exhibition at the Galleria Carla Sozzani, Milan, and the Essence of Quality exhibition of Comme des Garçons Noir with the Kyoto Costume Institute, Kyoto, Japan. In 1995 she participated in the Mode and Art exhibition in Brussels, Belgium. In 1996 she participated in the Art and Fashion exhibition at the Florence Biennale Internazionale dell' Arte Contemporanea in Italy. She featured in the Three Women: Madeleine Vionnet, Claire McCardell and Rei Kawakubo exhibition at the Fashion Institute of Technology, New York, and in Radical Fashion at the Victoria and Albert Museum in 2001.

Since Rei Kawakubo's first show in Paris, Comme des Garçons clothes have continued to be characterized by complex patternmaking and an unmistakable mix of the hand-crafted and technology. Her role in the history of twentieth- and twenty-first-century fashion is about the creative fusion of two cultures and two audiences. In her words, "If my ultimate goal was to achieve financial success, I would have done things differently, but I want to create something new. I want to suggest to people different aesthetics and values. I want to question their being" (Frankel, p. 158).