Roberto Capucci was born in Rome on 2 December 1930. He attended the Liceo artistico and the Accademia di Belle Arti di Roma, undecided as to whether to become an architect or a film director. He began designing clothing when he was still quite young and soon turned to fashion as his primary activity.

In 1950 Capucci opened his first atelier on the via Sistina in Rome; in 1951 he presented his designs in a fashion show organized by Marchese Giovan Battista Giorgini in Florence. On this occasion, Capucci showed overcoats lined with ermine and leopard, capes edged in dyed fox fur, garments of violet wool with brown and silver brocade-clothing that immediately won for him a loyal following. In reality, Capucci was still too young in 1951 to put together his own shows. The English-speaking fashion press referred to Capucci at this time as the "boy wonder" because he was not yet twenty when he opened his first atelier. Giorgini came up with a plan in which his wife and daughter modeled Capucci's clothes during the show; the buyers literally went wild for the talented young designer. By 1956 Capucci was acclaimed as the best Italian fashion designer by the international press; that same year, he was publicly complimented by Christian Dior. In 1958 he was awarded the Filene's of Boston "Fashion Oscar," given for the first time to an Italian. Capucci was given the American award for his collection of angular clothing, which was part of his linea "ascatola" or "white boxes" project. The so-called box look was invented at the end of the 1950s by Capucci, to introduce the concept of architecture, volume, and project; an idea of tailoring related to the dress only. Consuelo Crespi was named the world's most elegant woman wearing one of Capucci's dresses.

In 1962 Capucci opened a workshop on the rue Cambon in Paris, a city he loved and where he was well received. He lived at the Hotel Ritz and was on friendly terms with Coco Chanel. Capucci was the first Italian designer asked to launch a perfume in France. After six years in Paris, Capucci returned to Italy permanently in 1968 and opened an atelier on the via Gregoriana in Rome, which became his headquarters.

Capucci designed costumes for films and theatrical productions from the late 1960s through the 1970s. He believed that this experience was fundamental to his later artistic development. In 1968 Capucci designed the costumes for Silvana Mangano-in his opinion the most elegant woman he ever met-and Terence Stamp in Pier Paolo Pasolini's film Teorema (1970). In 1986 he designed the priestess's costumes for a production of Vincenzo Bellini's opera Norma in the Arena di Verona, in "Omaggio a Maria Callas." In 1995 Capucci was invited to China as a visiting lecturer in fashion design at the Universities of Beijing, Xi'an, and Shanghai. 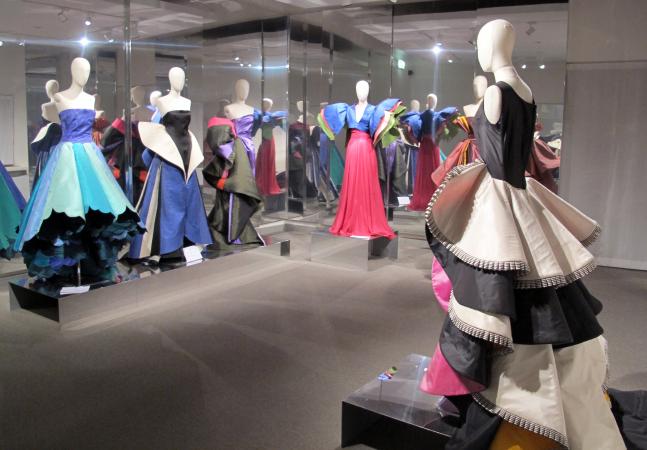 Capucci is most often associated with haute couture, oneof-a-kind garments, and experimentation with structure. His garments are studies in volume, three dimensional in conception. His research followed both the abstract shape of geometry and the shape inspired by nature. He searched for an individual solution, a style, but he was primarily interested in the shape of the finished garment. He worked with meticulous attention to detail when designing a collection, preparing sometimes as many as a thousand sketches, always in black and white to better evaluate forms and their metamorphoses and avoid being directly influenced by color. The preparation of a garment could require several months of work. Capucci used yards and yards of fabric, seeking out the most precious materials: taffeta, the softest satin, raw silk, mikado, georgette, and dyed silk from Lyon. It was not so much the rarity of the materials that interested him as the infinite possibilities for their use.

During the 1960s Capucci experimented with commonplace materials like raffia, plastic, straw, sacking, and Plexiglas. But throughout his career Capucci remained faithful to his primary interests-geometry, form, naturalism, and botany. The art critic Germano Celant wrote that his designs might be described by a historian as "soft medieval armor" (Bauzano 2003). Capucci traveled often and drew inspiration from his frequent travels. This influence was reflected in his designs or, as he described it, "the transposition to paper of emotions, ideas, and forms that I see around me when I travel" (Bauzano and Sozzani, p. 40). One of his favorite countries was India.

When ready-to-wear clothing and consumer fashion took hold in Italy during the 1980s in response to the demands of the marketplace, Capucci decided to withdraw from a system he considered unsuited to his way of working. In the beginning of the 1980s he resigned from the Camera Nazionale Della Moda Italiana, translated as the No Profit Association, which was founded in 1958 to discipline, coordinate, and protect the image of Italian fashion. Among other activities the Camera Della Moda is in charge of the organization of four events a year concerning prêt-à-porter: Milano Collezioni Donna (February- March and September-October) and Milano Collezioni Uomo (January and June-July). He decided to show his work no more than once a year, at a time and at a rhythm that suited him, often in museums, and always in a different city-the one that most inspired him at the moment. Clearly, Capucci was not part of Italian ready-to-wear design, a field from which he quickly distanced himself because he felt its logic of mass production was foreign to his creative needs.

Capucci was opposed to the "supermodel" phenomenon, which, in his opinion, obscured the garment, as did all other aspects of contemporary fashion. He preferred to make use instead of opera singers, princesses, the wives of Italy's presidents, and debutantes from the Roman aristocracy. These women were called "capuccine" by the journalist Irene Brin. However, for more solemn occasions, he often turned to the famous and the beautiful: Gloria Swanson, Marilyn Monroe, Jacqueline Kennedy, Silvana Mangano, and the scientist Rita Levi Montalcini, whom he dressed for the Nobel Prize ceremony in 1986.

Capucci's designs are often based on twentieth-century artistic movements: futurism, rationalism (the focus on pure shape for which he searched), and pop art. Referred to as the "Michelangelo of cloth," Capucci claimed, "I don't consider myself a tailor or a designer but an artisan looking for ways of creating, looking for ways to express a fabric, to use it as a sculptor uses clay" (Bianchino and Quintavalle, p. 111). He considered himself a researcher more than a designer. His designs rarely seem to have dressing as their immediate goal. In this sense his creations can be appreciated for their intrinsic beauty and uniqueness. His designs are sculptural and architectural, which the body does not wear but inhabits; they are objects that blur the boundaries between art and fashion.

Capucci's designs have been shown in the world's leading museums, including the Galleria del costume in the Palazzo Pitti in Florence, the Museo Fortuny in Venice, the Victoria and Albert Museum in London, and the Kunsthistorisches Museum in Vienna. He has had many exhibitions of his work in Italy and around the world. In May 2003 the FAI (Fondo Italiano per L'ambiente) at Varese Villa Panza held an exhibition of Capucci's work. Giuseppe Panza di Biumo wrote in the introduction to the exhibition's catalog: "Capucci expresses his personality in a way that distinguishes him from everyone else. He is an artist in the fullest sense of the word, just as the painters who adorned their models with splendid garments." In 2003 Capucci's name became a brand, with a ready-to-wear line designed by Bernhard Willhelm, Sybilla, and Tara Subkoff, who have access to an archive of nearly 30,000 of Capucci's designs.