Rudi Gernreich was born on 8 August 1922 in Vienna and died in 1985. Gernreich's family came from the nonreligious Jewish middle class and had ties to the Social Democrats. One of his mother's sisters ran a fashion salon in Vienna where the newest French designs were translated with high-quality craftsmanship.

Gernreich Immigrated to the United States

In 1933 Austria, having affiliated itself with Nazi Germany, became the scene of rampant anti-Semitic violence. Rudi Gernreich and his mother were able to flee to Los Angeles. Gernreich studied art for a few semesters and quickly made a connection in Los Angeles with The Modern Dance Studio of Lester Horton, whose choreography was concerned with antifascist themes and racial discrimination. In the mid-1940s, his first sketches for dance costumes appeared. For a few years, Gernreich was a fashion designer for Adrian and others before developing his first small collection in 1948. In the late 1940s he worked for a short time in the garment district of New York's Seventh Avenue, returning eventually to California. Around 1950 he developed a collection of sportswear for Morris Nagel, which featured inter-changeable pieces. Hattie Carnegie engaged Gernreich for a few months during which he provided her with design sketches. In 1950 he met Harry Hay (1912-2002), who was a member of the California Communist Party and an activist union organizer. Hay and Gernreich founded the secret Mattachine Society, one of the first organizations to agitate for homosexual rights.

In 1952 Gernreich began work for Walter Bass, and his first designs were an immediate success. The newly founded Beverly Hills boutique, JAX, as well as department stores like Lord and Taylor in New York and Joseph Magnin in San Francisco, sold Gernreich's sportswear. Gernreich developed jersey tube dresses and printed nylon stockings and used synthetic materials. Starting in 1955 Gernreich also designed knitted bathing suits. In 1954 he met Oreste Pucciani, the future chairman of the UCLA French department, and began a relationship that would last until Gernreich's death in 1985. Finally in 1960, Gernreich established his own company: Rudi Gernreich Incorporated. In 1964, the monokini, or topless bathing suit, brought the name Gernreich into the headlines. In 1968 Gernreich closed his company but continued his work as a designer.

From the beginning of his career, Gernreich also designed costumes for various film productions, such as Eva Marie Saint's wardrobe in Otto Preminger's 1960 film Exodus. In 1970 he designed "Dress Codes" of the new decade for the January issue of Life magazine. Gernreich's fashion concept of the future was "unisex." In 1971 he presented an ironic military collection: jersey pieces in uniform colors, mounted pockets, and models armed with guns. In 1972 Gernreich developed a perfume, which came in a bottle shaped like a chemical laboratory beaker. Gernreich never thought of his activity as a designer as limited to fashion alone; clothing was only one possible expression of a freely chosen lifestyle.

Gernreich's 1950s bathing suits were influenced by the work of the American designer Claire McCardell. Gernreich's suits, conceived as an expression of a new body consciousness, were unstructured and emphasized the body's natural form. In 1965, Gernreich accessorized his bathing suits with visors, over-the-knee vinyl boots, and even fishnet stockings. In 1961 Gernreich's bathing suits and clothes featured cutouts, and in 1968 he used transparent vinyl inserts, which integrated the skin and silhouette of the wearer into the clothing.

The monokini, or topless bathing suit, first presented in 1964, finally made Gernreich internationally famous. Gernreich's monokini consisted of a rib-cage-height bottom, held up with shoulder straps. Gernreich had wanted to liberate the bosom from its status as something that had to be kept concealed. He also used this idea in his underwear collection "No." The bras from the collection, the "no bra," the "maybe bra," or, later, the "almost bra," were distinguished by their transparency and lightness. The thong, presented in 1974, is part of the standard repertoire of clothing in the early 2000s.

Use of Pattern and Color

Gernreich's collections often featured uncommon color combinations, such as black and white, orange and yellow, or red and purple, and the juxtaposition of differing graphic motifs, such as stripes with polka dots, checks with diagonal stripes, zigzags with cubes. On the one hand, the influence of the Vienna Workshops is apparent, on the other hand, Gernreich was responding to the antifashion of the 1960s and 1970s, whose signals and messages he transformed. "Real T-shirts are worn with slogans or Mickey Mouse figures or letters. All of these deliver messages. I have abstracted these signals into symbols, conveying them by various inserts: panels, stripes, or circles" (Topeka State Journal, 23 February 1972). Instead of extravagant tucks, folds, or piping, Gernreich accentuated and molded particular body parts through the optical effect of colors and patterns. With refined trompe l'oeil effects, the illusion of a multiple-piece suit was created. 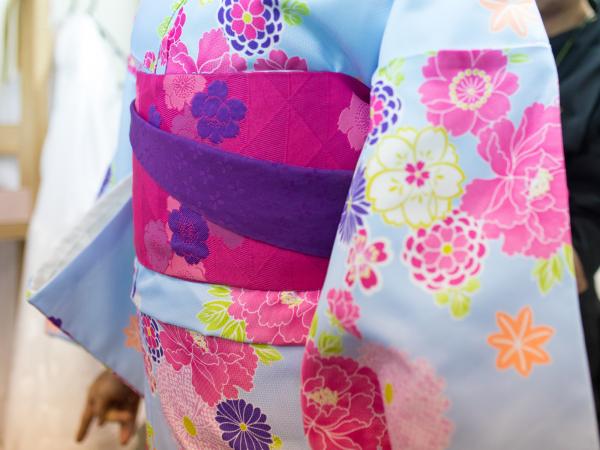 Gernreich's collections often included elements of folklore, quoted and freshly adapted: the pattern mixture of Austrian dirndl, the hussar's uniform with embroidery on black vinyl, or elements of Chinese and Japanese clothing, such as obis or colorfully patterned silks. The 1968 collection was criticized by the press at the time as not contemporary enough and seemed to many to even contradict Gernreich's modernism. But the designer had not intended to offer romantic dress-up as an escape from reality, but rather as a medium for a continual self-exploration or role-play. According to Gernreich, such a repertoire of historical and national style elements could only be successfully introduced in a free society whose members were capable of personal exploration and experimentation with a confident mastery of existing dress codes.

Gernreich always advocated the interchangeability of men's and women's clothes. In the Unisex Project of 1970, for example, Gernreich arranged for a woman and a man to be shaved completely of body hair. Then the pair modeled identical clothing: both in bikinis or miniskirts, both topless. In the conception of his unisex-style, Gernreich chose abstract, unromantic, democratic clothing which was intended to be available to all-in Gernreich's words: "an anonymous sort of uniform of an indefinite revolutionary cast" (Michigan News, 15 July 1971).

"We have to take this terrible world and make fun of it with fun clothes, functional clothes" (Los Angeles Herald Examiner, 29 September 1966). Already in 1954 Gernreich had used white vinyl for an evening dress. He tried to break through the traditional boundaries of clothing manufacture by using new materials. He was not only interested in the aesthetic characteristics of synthetic materials, but also in their manufacturing possibilities. He hoped to produce seamless clothing, but was frustrated due to the inability, at the time, to overcome technical problems. In addition to synthetic materials, Gernreich favored mechanical elements like zippers or metal fasteners, and he incorporated elements of both motorcycle clothes and dance leotards in his designs. He designed overalls with detachable pants legs, sleeves, or skirts, which could be altered at will.

"I consider designing today more a matter of editing than designing," said Gernreich describing his aesthetic method (Los Angeles Times, 30 January 1972). During the course of his career Gernreich utilized various styles, drawing upon austere secessionist patterns for casual slacks, reworking the simple cut of a sleeveless dress, season after season, with new materials and color combinations, introducing industrial materials like vinyl, or historical costumes for greater social flexibility. The exclusivity of expensive craftsmanship, the value of a particular material, or the refined solution to a particular technical sewing problem-be it sleeve holes or folds-would not have harmonized with Gernreich's design intentions. He reduced clothing to an inventory of functional pieces, which could be infinitely varied with colors, materials, or patterns.

Fashion magazines ignored, for the most part, his taboo-breaking, subversive fashion strategies. Gernreich, however, always saw his fashion concepts as carriers of a total, aesthetically formulated worldview. With the monokini he succeeded in pushing the fashion envelope. He utilized the success and fame awarded by his first collections in the 1950s to introduce his new aesthetic concepts about contemporary and futuristic clothing theory to the public eye. Art and fashion, thus, were never separated worlds for him. In the 1950s and 1960s, Gernreich was accepted in artistic circles because he had utilized fashion to radically question societal conventions. He rejected the idea of fashion as a corset of socially relegated hierarchy and rigid gender polarization. He used ironically provocative concepts such as the monokini, topless, unisex, and the Total Look to articulate a generation's desire for freedom as program.