Born Vivienne Swire in Glossop in Derbyshire in 1941, Vivienne Westwood originally set out to become a teacher. She married Derek Westwood in 1962; her first child was born a year later and she seemed destined to lead a quiet, suburban life. However, in 1965 she met Malcolm McLaren, a publicist and impresario, whose subversive ideas and alternative lifestyle gave Westwood the opportunity and momentum to break free from her former life and embark on a highly successful career of fashion.

Vivienne Westwood's designs are a reaction against traditional British standards of morality-against petty bourgeois notions of etiquette and propriety. Since her early street style-based collaborations with McLaren, Westwood has defied the ideal of polite, anonymous clothes that express the wearer's ascribed social status. She seeks to transcend definitions of class, gender, ethnicity, and sexual orientation and create outfits that are dramatic-that encourage wearers to carry themselves confidently as they masquerade in theatrical assimilations of eighteenth-century aristocratic dress or traditionally tailored suits adorned with fetish bondage buckles. West-wood is a utopian. Through her work and the ideas she expresses in interviews, she strives to construct new personae for future cultures that draw upon idealized visions of the past inspired by portraiture and film.

During the early to mid-1970s, she and McLaren merged tough biker leather jackets with pornographic imagery and traditional tartans to produce the DIY (doit-yourself) aesthetic that expressed the antiestablishment spirit of punk. Based in London's King's Road, they changed the name of their shop from time to time to enhance the current collection's ideals, from Let It Rock (1971) to Too Fast to Live, Too Young to Die (1973) to Sex (1974) and finally to Seditionaries (1976)-a name and anarchic style that coincided with the increased notoriety of the Sex Pistols, a punk rock band that McLaren managed. Punk enabled Westwood to break free from the suburbs she had felt trapped in and experiment with fashion's power to shock and challenge. Her sex shop-style plastic miniskirts worn with ripped fishnet stockings, buckles, and chains, fractured traditional notions of femininity and beauty. Along with her straggly-knit sweaters, Karl Marx portrait print shirts, and bondage trousers, they became emblems of pop cultural revolt.

Westwood's subsequent work with McLaren was just as closely linked to youth culture, music, and clubs. As her King's Road shop settled into its final incarnation as World's End in 1980, she embarked on a series of collections that explored historical construction techniques. One example was Pirates, presented at her first catwalk show in 1981. She continued to play with the relation-ship between body and fabric in the multilayered bulk of the Buffalo collection of 1982-1983 and the Witches collection of 1983-1984, which used sweatshirt fabric cut to pull away from the figure. These collections have inspired other designers; for example, punk was revisited in the early 1990s by Jean-Paul Gaultier and Karl Lagerfeld. Westwood's asymmetrical sportswear-based designs, highlighted with the neon colors that she used in her last collections with McLaren between 1983 and 1984, were seen on catwalks and in such High Street stores as Top-shop and H & M in 2002-2003. 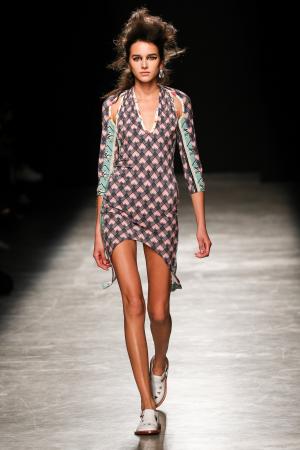 Westwood's split from McLaren prompted her shift away from pop culture and street style toward a more thorough exploration of history and tradition. She no longer wanted to be seen as a creator of subcultural dress, but rather as a designer of high fashion posing serious questions about culture, art, and identity. While her standing as one of the most significant British designers of the period was already established in mainland Europe, America, and Japan, she remained an outsider in Britain itself. It was not until the late 1980s that such high fashion magazines as Vogue began to feature her work on a regular basis. Before that time, her clothes were seen mainly in style magazines like The Face and i-D.

Westwood's first post-McLaren collection, Mini Crini (1986), indicated the direction she was to take, with its juxtaposition of eighteenth-century corsets, the "crini" (abbreviated 1860s-style crinolines), and huge curved wooden platform shoes that laced up the leg and rocked forward as the wearer walked in them. This collection was fashion created to make an impact; Westwood wanted to distinguish her wearers through references to grandeur, royalty, and the Establishment. In 1987 this dramatic aura was tempered by Westwood's ironic wit and her expertise with rich traditional fabrics: Harris tweed, John Smedley fine knits, and wool barathea were enlivened with such flourishes as a tweed crown worn with a tiny cape and crini. "You have a much better life if you wear impressive clothes," she remarked at the time (Jones, p. 57).

Westwood's philosophy, a mixture of contempt for late twentieth-century casual dress and reverence for the eighteenth-century Enlightenment's use of classical references, was encapsulated in her collections from 1988 through 1991 under the broad title Britain Must Go Pagan. These collections, like the punk fashions before them, sought to challenge existing ideas of status, gender, and display. In this case, however, Westwood strove for refinement and education rather than youthful rebellion. She used togas to add grandeur to traditional suiting, and contrasted light, floating chiffons that evoked both ancient Greece and prerevolutionary France with thick Scottish tweeds and corsets photoprinted with Boucher paintings of rural idylls. The clothing that resulted from these combinations relied heavily upon an idealized vision of the past and required its wearers to take on new personae that suggested their awareness of the fine arts.

Westwood appropriated emblems of aristocratic status and elitism for their power and theatricality. She encouraged people to dress up in princess-style coats like those the Queen wore as a child, or in delicate silk coats with rose-strewn edges like an eighteenth-century gentleman's garment. She has continued to draw on these themes of heritage and culture in her subsequent work. While Westwood is always considered inherently British, and has undoubtedly drawn upon her own country's past, she has been equally transfixed by French art and style. This attraction was summarized in her autumn-winter 1993-1994 collection, Anglomania, which harked back to Parisians' fascination with Englishness in the 1780s.

Westwood has consolidated her label since the late 1990s. In 1993 she diversified her collections to appeal to different audiences: the Red Label for ready-to-wear styles, the Gold Label for made-to-measure garments, and in 1998, and the diffusion line Anglomania (a less expensive collection aimed at a younger market), which reinterprets such staples as the pirate shirts from her earlier collections. Along with her perfumes, Boudoir, launched in 1998, and Libertine, launched in 2000, this diversification has enabled her to widen her market and build upon her previous successes.