The Paris-based African fashion designer Lamine Kouyaté is the creator of the XULY.Bët brand. The company is best known for its use of recycled clothing to create high fashion, reshaping found garments by cutting, stitching, and silk-screening, or making modifications that range from the subtle shaping of a seam to the complete transformation of a garment's function. XULY.Bët's recycled clothing embodies several seemingly contradictory attributes: simultaneously mass-produced and unique, new and old, African and European, exclusive and accessible, emerging out of the rarified fantasy of fashion runways and the gritty practicality of the streets. This work turns the notion of haute couture inside out, since it relies on the creation of garments that are one of a kind because they are made of used clothing that has been discarded.

Lamine Badian Kouyaté is the product of the cosmopolitan African culture of both urban Africa and the African diaspora. He was born in Bamako, the capital of the West African country Mali, in 1962. His father was a government minister in the first postcolonial administration, and his mother was a doctor from Senegal. Kouyaté's father was imprisoned during the 1968 coup d'État, when President Modibo Keita was overthrown by Moussa Traoré, who led a repressive, dictatorial government until 1992. The family left the country, moving to Paris when Kouyaté was fourteen, then to Dakar when he was sixteen, where his father worked for the United Nations. Dakar and Bamako are cosmopolitan centers whose cultural influences draw upon African, European, American, and myriad other sources. Kouyaté described the global perspective of youth culture in the African cities: "I knew more about rock and funk in the 70's than any of the kids in Paris when I got here" (Spindler, p. 1). At age twenty-four, he left Dakar to study architecture at the University of Strasbourg in France.

Before completing his architecture degree, Kouyaté moved to Paris and began working as a clothing designer. He founded his XULY.Bët label in 1989. Kouyaté's background in architecture may in part explain his tendency to reveal and rework the structure of garments, often by disassembling them at the seams. Kouyaté's fashion sensibilities were also shaped by his interests in music and performance. He participated in the underground Parisian music and nightclub scene of the early 1980s and, as part of that environment, began designing clothes for performances and for his friends in the clubs. He continues to perform as a musician with his band, "This Is Not A Machine Gun." His attention to the expressive potential of music and performance continues to be manifested in his work, including most notably his presentation of designs at fashion shows. 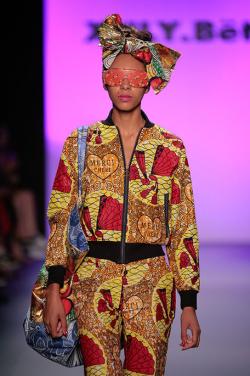 Kouyaté's line of recycled garments debuted in 1992 as part of the first major collection of the XULY.Bët brand. The garments were made of previously owned shirts, sweaters, dresses, pants, hosiery, and other clothing purchased in flea markets, charity shops, and lowend department stores. Kouyaté altered each garment, responding to the fabrics and the shape of the piece, cutting, removing, and restitching seams using bright red thread. His energetic technique is preserved in the threads left hanging at the end of seams, their red hue emphasizing the process of transformation from discarded garment to designer statement. Kouyaté's reshaping of garments includes the transformation of dresses into skirts, skirts into bags, stockings into halter tops, and sweaters stitched together to create dresses.

The previous lives of XULY.Bët recycled garments are deliberately preserved; Kouyaté leaves the original labels in the collars of used shirts and the waistbands of pants purchased at flea markets. These labels provide vivid evidence of the histories of clothing that has been used, discarded, and later returned to the fashion market by the designer. The original label alludes to the garment's first life; the bright red XULY.Bët label, usually placed on the outside of the garment, declares its current identity. The used garments Kouyaté works with provide an endless source of constantly changing raw material, like an archaeological record of past styles that are rein-troduced into the fashion market.

XULY.Bët's first major fashion show, held during the spring 1992 season in Paris, illustrates Kouyaté's interest in the tension between the theatrical and the mundane. His debut fashion show's innovative staging emphasized the brand's raw, edgy aesthetic. Kouyaté presented the show outside the conventional precincts of the fashion industry, at a public park. He did not use a runway or a sound system. Instead, models emerged from a bus that pulled up at the site, each carrying a boombox that provided her own soundtrack to the event. No stage, no lights, no delineation of theatrical space separated the audience from the performers, just as the garments themselves were but subtly separated from their previous, mundane lives.

Kouyaté's work incorporates aspects of his own biography, which encompasses contemporary, urban Africa as well as the fashion worlds of Paris and New York. His company's name draws immediate attention to his African origins. In Oulouf (or Wolof), the predominant language of Senegal, XULY.Bët is a colloquial term that can be roughly translated as "voyeur," or, in a more nuanced definition, as someone who breaks through appearances to see the reality beneath the surface. This notion, peeling back the exterior to reveal the often uneven surfaces layered beneath, is embodied by Kouyaté's exposed seams and loose threads. He has cited his roots in Africa as an important source of inspiration for his recycled fashion, reflecting a widespread African ethic of reusing resources that is born out of necessity. Kouyaté draws on Africa in a more literal sense, using African fabrics in several of his designs and, in the early twenty-first century, working with dyers in Mali to create fabrics that he uses in his other clothing lines.

Kouyaté is among the few African designers to have achieved an international profile; XULY.Bët clothing and the designer himself have been featured in prominent publications, including French Glamour, the New York Times, Le Figaro, and Essence. His clothing played a prominent role in Robert Altman's film Ready To Wear (1994), in which a fashion show in an underground subway station presents XULY.Bët clothing as the work of one of the film's main characters. The designer's personal background as well as his work drew substantial attention from both the fashion and the popular press, particularly in the early 1990s. In the early 2000s Kouyaté continued to design actively, marketing his clothing through several shops in Paris and for international clients.

Revue Noire 27 (March 1998). Special issue on African fashion includes a large spread devoted to XULY.Bët, with generous illustrations of his recycled line of clothing. An important publication for readers seeking insight into African fashion design as an international phenomenon.

Spindler, A. M. "Prince of Pieces." New York Times (2 May 1993): section 9, pp. 1, 13. Most substantive coverage of the designer available, including an overview of his career and extensive quotations from interview with Kouyaté.